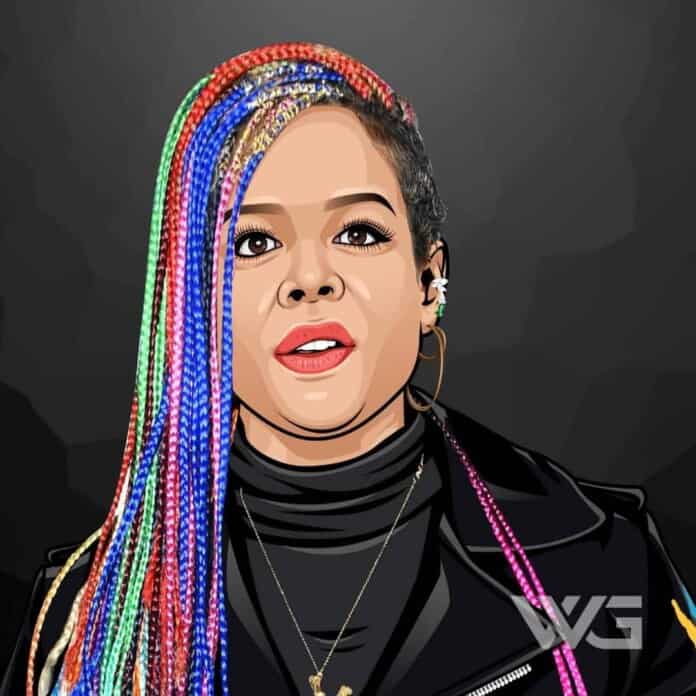 What is Kelis’ net worth?

Kelis is an American singer and songwriter.

When she was 14 years old, she was admitted to New York’s Fiorello H. LaGuardia High School of Music & Art and Performing Arts. She started working with Pharrell Williams and Chad Hugo, known as The Neptunes. This resulted in her signing to Virgin Records. Today, she is one of the most popular singers and songwriters.

Kelis’ first name is a portmanteau of her father’s name, Kenneth, and her mother’s name, Eveliss. Her father was a jazz musician, and he was also a professor at Wesleyan University.

Her mother is a fashion designer who inspired Kelis to start with her singing career. Kelis has three sisters. Growing up, she sang in church choirs and played piano, violin, and saxophone.

Kelis left her parent’s home when she was 16 years old to pursue her music career. She soon landed a deal with Virgin Records. In the mid-1998, she started to record her debut album ‘Kaleidoscope’ which was completed and released within a year.

The album came with hits such as ‘Caught Out There,’ which was very popular across Europe. She did not only impress her fans with her music but also with her colorful style in clothing and hair. In 2001, she dropped her second album ‘Wanderland.’

She is currently working on new albums. In addition to her previous music, she has also been on tours with other stars such as ‘Moby’s Area One Tour,’ ‘U2’s Elevation Tour,’ ‘Britney Spears‘ The Onyx Hotel Tour,’ as well as on her ‘All Hearts Tour’ with Robyn.

When it comes to her private life, she has a son named Knight, with her ex-husband Nas. The couple married in 2005 but later had a divorce in 2010.

Here are some of the best highlights of Kelis’ career:

“There’s a difference between a pop star and an artist. Pop stars have to be perfect all the time; an artist is allowed, on occasion, to suck. And I put myself in that category because I sometimes suck. I’m not trying to please the masses. It’s not going to happen, so I don’t try.” – Kelis

“Being the ideal of a strong woman means utilizing all the things that God gives you. People are always saying to me, ‘You’re a strong female, so why are you wearing a bikini on the cover of that magazine?’ Being a strong woman is misconstrued to be something evil and ugly.” – Kelis

“After ‘Kelis Was Here,’ I was done. I was like, ‘I will never put out another record again; and I hate this business; I hate all these people.’ I was in this race that I didn’t even realize that I was in.” – Kelis

“There’s a point where you think, ‘What else will I do if I don’tmakeo music?’ It becomes your identity when it never should have been. But food ignited a fire in me, and I came right back to music because it no longer felt like a job. It was a compelling thing for me.” – Kelis

“Growing up, my mom had a catering business. I used to help her pretty early on and loved doing it. My mom is an amazing cook, and she helped me cultivate a love for food. She taught me that food can be beautiful. We eat not just for survival, but we survive to eat. It’s part of who I am.” – Kelis

Now that you know all about Kelis’ net worth and how she achieved success; let’s take a look at some of the best lessons we can learn from her:

The music industry is a world of smoke and mirrors: they tell you exactly what they think you want to hear. And they are bare-faced lying.

The business of music. You know, it’s an oxymoron in a sense. It’s like the two things.

3. Being a Black Artist

As a black artist in America, it is so segregated as far as the radio goes and how they position music on the radio.

How much is Kelis worth?

Kelis’ net worth is estimated to be $4 Million.

How old is Kelis?

How tall is Kelis?

Kelis is a singer and songwriter. She has gained her amazing net worth as a successful R&B singer, and she has sold over six million records worldwide.

Kelis has impressed many with her amazing singing skills, which has resulted in her many awards. She has been nominated for two Grammy Awards.

What do you think about Kelis’ net worth? Leave a comment below.