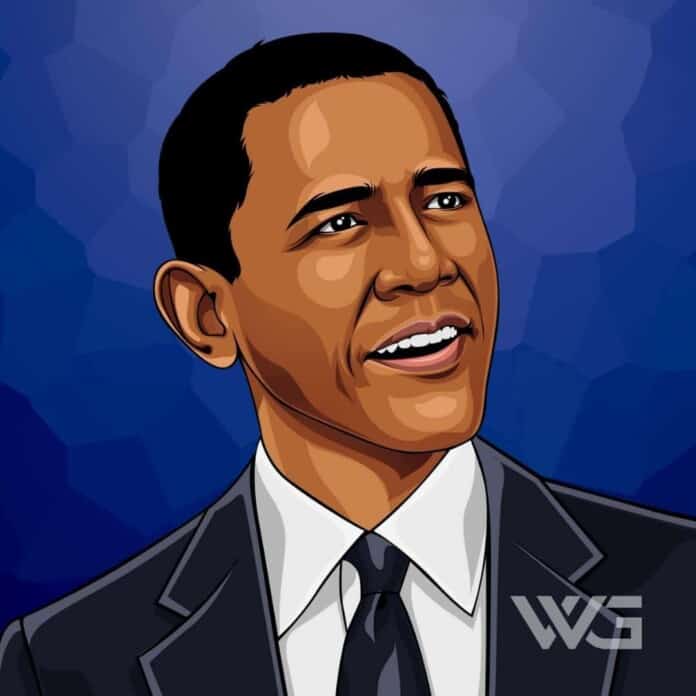 What is Barack Obama’s net worth?

As of February 2023, Barack Obama’s net worth is estimated to be $70 Million.

Barack Obama is the 44th president of the United States, born in Hawaii and primarily raised by just his mother. Obama is also a Harvard Law School graduate and former lecturer at the university.

He won a Nobel Peace Prize in 2009 and currently remains among few presidents to do so.

Barack Hussein Obama was born on the 4th of August 1961 in Honolulu, Hawaii, which is where he mainly grew up. Obama did spend a year of his childhood in Washington State. In 1964 his parents divorced, and his father moved to Kenya.

By 1965 his mother had remarried, and they relocated to Indonesia for four years. In 1971, Obama returned to Honolulu to live with his maternal grandparents, where he attended and graduated in 1979 from Punahou School.

Over the years he discusses at length and reflects on how he managed the social perceptions related to his multicultural heritage.

His educational pursuits after high school involved some moving around. By 1981 he had completed his freshman and sophomore years at Occidental College in Los Angeles.

During his time working for the university he also joined Miner Barnhill and Galland; a large firm where he was specializing in civil rights litigation as a civil rights attorney, which included economic development.

In 2005 Obama became the Illinois state senator, winning 70% of the vote in the 2004 general election. As a senator, he co-sponsored two initiatives, Secure America and the Orderly Immigration Act. By late 2006 – early 2007, he began stepping down to prepare for his presidential campaign.

In early January of 2009, Barack Obama was sworn in as the 44th United States President, serving two terms until 2017. When elected president, he was the first African American president and remains the only one in history. Within his first 100 days in office, he had ordered the closing of Guantanamo Bay.

The first bill Obama signed into law was the Lilly Ledbetter Fair Pay act of 2009, which served to change the statute of limitations for equal-pay lawsuits.

During his terms of presidency, Obama served fearlessly and ensured and supported further statutes for LGBTQ rights. Including a crime prevention act, in combination with his support for the legalization of same-sex marriage.

Here are some of the best highlights of Barack Obama’s career:

“Our big problem right now is politics, can’t even get it out of football.” – Barack Obama

“America isn’t Congress, America isn’t Washington, America is the striving immigrant who starts a business, or the mom who works two low-wage jobs to give her kid a better life. America is the union leader and the CEO who put aside their differences to make the economic stronger.” – Barack Obama

“I think when you spread the wealth around it’s good for everybody.” – Barack Obama

“You know, my faith is one that admits some doubt.” – Barack Obama

View our larger collection of the best Barack Obama quotes!

Barack Obama’s first book, Dreams from My Father, was published in 1995 and became a bestseller. He has since published two more books: The Audacity of Hope in 2006, and A Promised Land in 2020. According to Forbes, these three books alone have earned the Obamas a combined $15 million.

In addition to their book earnings, the Obamas have also made millions through speaking engagements. It is estimated that Barack Obama charges between $200,000 and $400,000 per speech, while Michelle Obama charges $100,000-$250,000 per speech. The Obamas gave a joint keynote address at the 2018 AIA Conference on Architecture in New York City, which reportedly earned them a cool $500,000.

They reportedly signed a joint book deal worth $65 million with Penguin Random House shortly after leaving office. And on top of being paid handsomely for speaking engagements all over the world, they’ve also signed a multi-year deal with Netflix to produce films and series for the streaming service. The terms of the deal were not disclosed, but it’s been estimated to be worth around $50 million.

When it comes to real estate, the Obama family is definitely not your average American family. The former President and First Lady of the United States have amassed quite a property portfolio over the years, with homes in Washington D.C., Chicago, New York City, and Hawaii.

Barack and Michelle Obama bought their first home – a modest cond – in Chicago’s Hyde Park neighborhood, which they purchased for $1.65 million in 2005. They lived there until 2009, when they moved into the White House. In 2017, they bought a 8,200-square-foot mansion in Washington D.C.’s Kalorama neighborhood for $8.1 million.

The Obamas also own a vacation home on Martha’s Vineyard, which they purchased for $11.75 million in 2019. And last but not least, they have a stake in a luxury condominium complex in Manhattan’s Upper West Side, which is currently valued at upwards of $35 million.

Not bad for a couple who started out with relatively little!

Some of the organizations that have benefited from Barack Obama’s philanthropy include the Boys & Girls Clubs of America, the Clinton Foundation, the African Leadership Academy, and the My Brother’s Keeper Alliance. In addition, Obama has also given money to support education initiatives, health care reform, and disaster relief efforts.

Barack Obama is one of the most generous people in politics, and his philanthropy is proof of that. He has used his platform and his influence to make a difference in the lives of millions of people around the world.

How much is Barack Obama worth?

Barack Obama’s net worth is estimated to be $70 Million.

How old is Barack Obama?

How tall is Barack Obama?

Barack Obama is one of the most memorable presidents of America, as he generated a great deal of change in both of his terms of presidency.

Currently, in his late 50s, Obama is still active in political advocacy, where we can make it count by delivering speeches when invited to do so. Also, he and the former first lady established the Obama Foundation.

As of February 2023, Barack Obama’s net worth is estimated to be $70 Million.

What do you think about Barack Obama’s net worth? Leave a comment below.