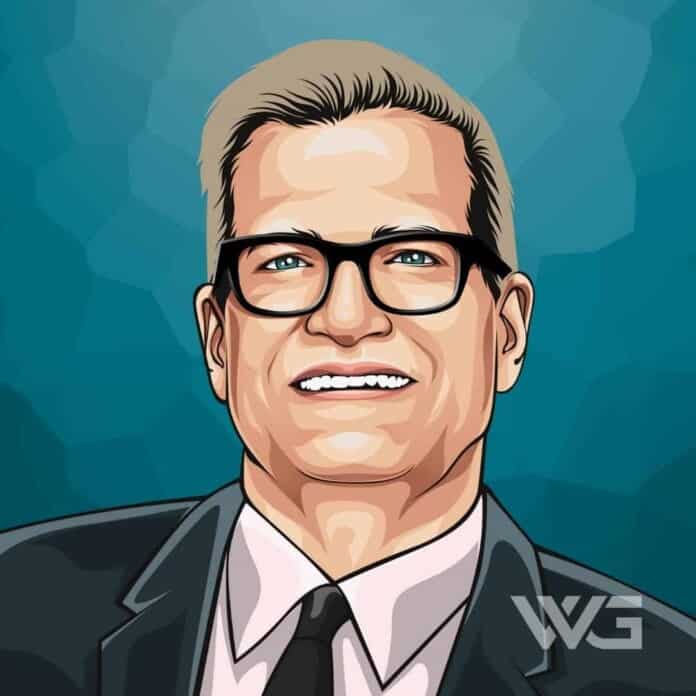 What is Drew Carey’s net worth?

As of November 2022, Drew Carey’s net worth is approximately $165 Million.

After serving in the U.S. Marine Corps and making a name for himself in stand-up comedy, Carey eventually gained popularity starring in his own sitcom, ‘The Drew Carey Show’.

Drew Carey was born on the 23rd of May, 1958, in Cleveland, Ohio. He is the youngest of Lewis and Beulah Carey’s three sons and raised in the Old Brooklyn neighborhood of Cleveland, Ohio.

When Drew was eight years old, his father died from a brain tumor. Drew played the cornet and trumpet in the marching band of James Ford Rhodes High School, from which he graduated in 1975.

In 1985, he began his comedy career by following up on a suggestion by David Lawrence (a disc jockey friend who had been paying Drew to write jokes for David’s radio show in Cleveland) to go to the library and borrow books on how to write jokes.

His early stand-up career led to supporting roles on television shows, during which he developed the character of a hapless middle-class bachelor. In 1993, Carey had a small role in the film Coneheads as a taxi passenger.

After their stint on Someone Like Me, Carey and Helford developed and produced the storyline for ‘The Drew Carey Show’. The sitcom revolved around a fictionalized version of Carey, as he took on the stresses of life and work with his group of childhood friends.

For the WB’s 2004–2005 primetime schedule, Carey co-produced and starred in ‘Drew Carey’s Green Screen Show’, a spin-off of ‘Whose Line Is It Anyway?’. The show’s premise relied on the use of a green screen for some of the actors’ improv interaction with each other.

In April 2011, Carey began hosting a primetime improv show, called Drew Carey’s Improv-A-Ganza. It was filmed at the MGM Grand in Las Vegas, Nevada, and first aired on April 11.

Here are some of the best highlights of Drew Carey’s career:

“I’ve got to say that I don’t see myself as some sort of political types like Alec Baldwin or Barbra Streisand. I don’t want to come across like that. I’d be embarrassed if that was the way I came across.” – Drew Carey

“TV is easier: it’s all planned out for you, and the audience is there to see a show and they are all pumped up, but when you are in a comedy club, you have to be really funny to win them over. To me, that’s purer.” – Drew Carey

“There’s a game called Checkout where there are grocery items and it’s how much you think the manufacturer’s suggested retail price is and we add up your total, then your total has to be within $2 of the regular total. I don’t think I could ever win that game.” – Drew Carey

“The hardest diet I was ever on was the one when I was fat. You can only wear fat clothes, you don’t feel good, your sex life gets damaged, you don’t have the energy for anything. It’s horrible.” – Drew Carey

Now that you know all about Drew Carey’s net worth, and how he achieved success; let’s take a look at some of the lessons we can learn from him:

Be thankful for all the good things in your life and even be thankful for struggles. It is the steep mountains we climb that make us stronger.

There’s nothing positive about being selfish. The more you give, the better place the world and you will be.

You’re either going forward or backward because life doesn’t let you stand still. You have one life, so make it the best, happiest, and fullest it can be.

How much is Drew Carey worth?

Drew Carey’s net worth is estimated to be $165 Million.

How old is Drew Carey?

How tall is Drew Carey?

Drew Allison Carey is best known for ‘The Drew Carey Show’, and serving as host of the U.S. version of the improv comedy show ‘Whose Line Is It Anyway?’.

What do you think about Drew Carey’s net worth? Leave a comment below.