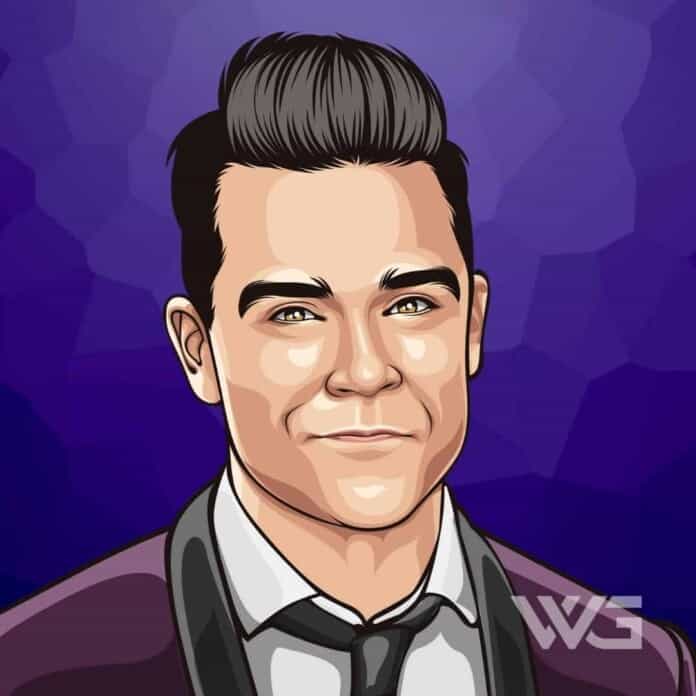 What is Robbie Williams’ net worth?

As of February 2023, Robbie Willams’ net worth is approximately $300 Million.

Robert “Robbie” Peter Williams is an English singer, songwriter, and entertainer from Staffordshire, England. Williams found fame as a member of the pop group ‘Take That’.

He has released 7 UK number 1 single and all but one of his 11 albums have reached number one in the UK. Williams is regarded to be one of the greatest singers in the world.

Robert “Robbie” Peter Williams was born on the 13th of February, 1974, in Staffordshire, England. Williams is the son of Janet and Peter Williams. His maternal grandfather was Irish and hailed from Kilkenny.

Williams attended St Margaret Ward Catholic School in Tunstall, before attending dance school UKDDF in Tunstall. He participated in several school plays, and his biggest role was that of the Artful Dodger in a production of Oliver!

Williams music career commenced in 1990 when his mother made him attend an audition for a new boy band, ‘Take That’. Once he was selected, his music career took off. He earned great recognition as a singer and dancer through ‘Take That’ and worked with the group for five years.

In 1996,  he released the single, ‘Freedom’, a cover of George Michael’s song. The song rose to the number two position in the UK singles chart.

He released his debut album, ‘Life Thru A Lens’, in September 1997. The single ‘Angels’, was certified platinum by the BPI and the album became a best-seller in the United Kingdom.

In 2002, he broke his official tie from Guy Chambers, his long-time collaborator after the release of his album ‘Escapology’. In 2005, he collaborated with Stephen Duffy, the British songwriter and released the album ‘Intensive Care’ and produced compilations that were ranked number one in 18 countries.

He released his solo album ‘Rudebox’ that earned double platinum status in 2006. He collaborated again with Guy Chambers for his next album ‘Reality Killed the Video Star’, which released in 2009. The same year, he worked with his former band ‘Take That’ which kindled the rumors regarding his reunion with the band.

Here are some of the best highlights of Robbie Williams’ career:

“There used to be a huge hole in my life that I wrote many albums about. I didn’t realize it was a wife-and-daughter-shaped hole. They’ve plugged that gap. Everything I do, I do for them now. When daddy goes to work, it’s daddy going to work, not Rob going to work. I feel like there’s a purpose to everything.” – Robbie Williams

“My dad sent Frank Sinatra a dollar bill to autograph, and when it came back, signed, he had it framed: it was always up on the wall in whatever flat we were in.” – Robbie Williams

“I’m sure that when my daughter will bring home her first boyfriend, I’ll be so intimidating that he’ll run away, but embarrassing as well, just to have a bit of fun.” – Robbie Williams

Now that you know all about Robbie Williams’ net worth, and how he achieved success; let’s take a look at some of the strongest lessons we can learn from him:

1. Learn from Your Past

Wealth is measured by your happiness and not by your financial statement.

3. Be Nice to Yourself

Do things for yourself in everything you do; don’t live for other people.

How much is Robbie Williams worth?

Robbie Williams’ net worth is estimated to be $300 Million.

How old is Robbie Williams?

How tall is Robbie Williams?

Robbie Williams is a BRIT Award-winning singer, dancer, and songwriter who garnered widespread publicity as a member of the pop boy band ‘Take That’. He is one of the bestselling music artists whose album have made records with their worldwide sale of 70 million.

What do you think about Robbie Williams’ net worth? Leave a comment below.