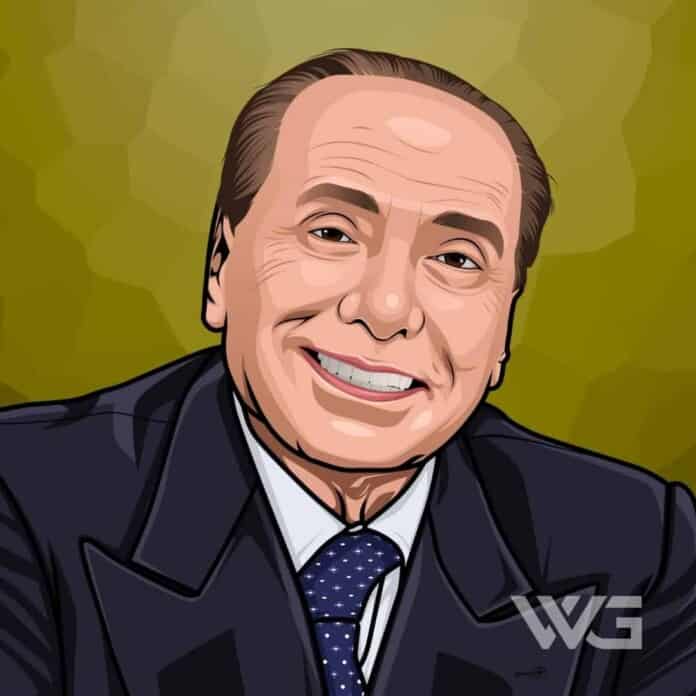 What is Silvio Berlusconi’s net worth?

Silvio Berlusconi is an Italian media tycoon and politician.

Berlusconi served as Prime Minister of Italy in four governments. He was a member of the Chamber of Deputies from 1994 to 2013. He is the controlling shareholder of Mediaset and owned the Italian football club A.C. Milan from 1986 to 2017.

Silvio Berlusconi was born on the 29th of September, 1936, in Milan.

Berlusconi was raised in a middle-class family. His father was a bank employee, and his mother was a housewife. He was the first of three children.

After completing his secondary school at a Salesian college, he studied law. He graduated in 1961, and he was not required to serve the standard one-year stint in the Italian army.

Berlusconi started his career in the construction industry. His first notable assignment being erecting 4000 residential apartments building in Milan in the late 1960s.

In 1994, he successfully won the chair of the Prime Minister. Differences crept between the coalition parties of Forza Italy, the League, and the National Alliance, which led to the downfall of his cabinet in merely nine months.

He stepped down from the premiership in 2011 with the escalating fiscal problem and descending majority in the parliament. He was succeeded by Mario Monti. In the recently held 2013 parliamentary elections.

Berlusconi was the first person to assume the premiership without having held any prior government o administrative offices. He is well known for her political style. In his long tenure, he was often accused of being an authoritarian leader and a strongman.

Until this day, he remains a controversial figure who divides public opinion and political analysts. Supporters emphasize his leadership skills and charismatic power, his fiscal policy based on tax reduction.

Here are some of the best highlights of Silvio Berlusconi’s career:

“I tell you the truth: if I lived in a country where there was no day appointed for elections, I would become a revolutionary, if not a terrorist. And that is because I love liberty too much; without liberty, a man is not a man. He has no dignity.” – Silvio Berlusconi

“I don’t need to go into office for the power. Have houses all over the world, stupendous boats… beautiful airplanes, a beautiful wife, a beautiful family… I am making a sacrifice.” – Silvio Berlusconi

“We all say no to war. We are all for justice and peace. But sometimes, in order to maintain peace, armed action is necessary. But we hope it won’t be the case.” – Silvio Berlusconi

“Obviously the government of [Mussolini’s] time, out of fear that German power might lead to complete victory, preferred to ally itself with Hitler’s Germany rather than opposing it … The racial laws were the worst fault of Mussolini as a leader, who in so many other ways did well.” – Silvio Berlusconi

“In exchange for the commitments I have made over almost 20 years in favour of my country and coming almost at the end of my public life, I have been rewarded with accusations and a verdict that is founded on absolutely nothing. Is this the way Italy recognizes the sacrifices and commitment of its best citizens?” – Silvio Berlusconi

“I did not say anything against the Islamic civilization… It’s the work of some people in the Italian leftist press who wanted to tarnish my image and destroy my long-standing relations with Arabs and Muslims.” – Silvio Berlusconi

Now that you know all about Silvio Berlusconi’s net worth and how he achieved success; let’s take a look at some of the lessons we can learn from him:

We all say no to war. We are all for justice and peace. But sometimes, to maintain peace, armed action is necessary.

The link between my experience as an entrepreneur and a politician is all in one word: freedom.

How much is Silvio Berlusconi worth?

Silvio Berlusconi’s net worth is estimated to be $8.5 Billion.

How old is Silvio Berlusconi?

Silvio Berlusconi was born on September 29, 1936, and is currently 86 years old.

How tall is Silvio Berlusconi?

Silvio Berlusconi is a former Prime Minister in Italy.

He is one of Italy’s longest-serving prime ministers. He is the owner of the Italian football club A.C Milan.

Coming from a lower-middle-class family, the young and versatile Berlusconi studied law in Milan and worked as a singer on cruise ships and nightclubs.

What do you think about Silvio Berlusconi’s net worth? Leave a comment below.