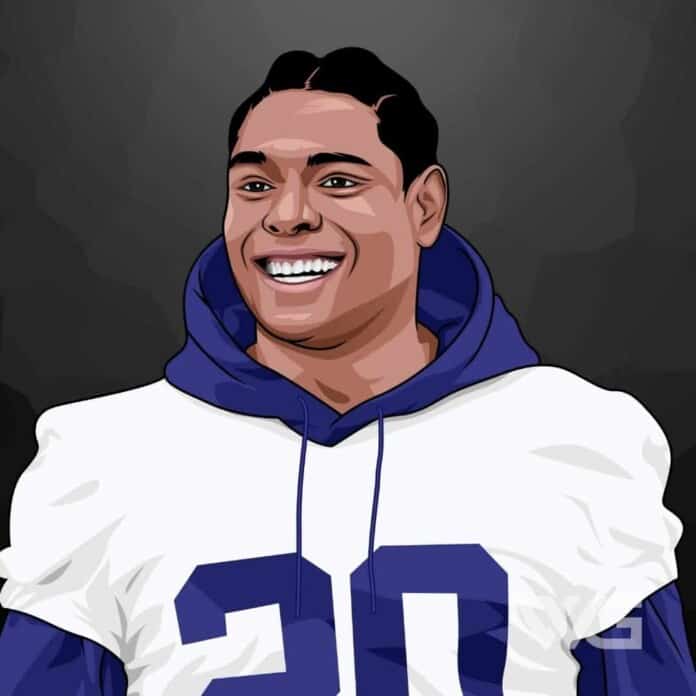 What is Jalen Ramsey’s net worth?

Jalen Ramsey is an American football cornerback for the Los Angeles Rams of the NFL.

Ramsey played college football at Florida State and was drafted by the Jacksonville Jaguars fifth overall in the 2016 NFL Draft.

Jalen Lattrel Ramsey was born on the 24th of October, 1994 in the town of Smyrna, Tennessee.

Ramsey is the son of Lamont and Margie Ramsey. Jalen’s older brother, Jamal, participated in football, basketball, and track at Battle Ground Academy in Franklin.

Ramsey perfected his football skills playing with much older boys at a local park. He grew up cheering for the Miami Hurricanes in a family of Florida Gators fans.

Ramsey made his debut and the first career start in the Jaguars’ season-opener against the Green Bay Packers and recorded three solo tackles in the 27-23 home loss.

He was named AFC Defensive Player of the Week for his performance against the Titans. Ramsey also finished his rookie season with 65 combined tackles (55 solos), 14 pass deflections, two interceptions, and a touchdown in 16 games and 16 stars.

He recorded two solo tackles and intercepted a pass attempt from Baltimore Ravens’ quarterback Joe Flacco, as the Jaguars routed the Ravens 44-7 on 24th September 2017.

Here are some of the best highlights of Jalen Ramsey’s career:

“He ain’t playing no games with your family. And your family’s too short! I’m going up on top of all of them. Please let Golden guard me. I’m going up top on Golden.” – Jalen Ramsey

“She said your knee’ll go bad and everything. Lamont’s guffaw crackles over the speakerphone, competing with the restaurant’s early morning din: I’ll make her dad throw all they ribs up he been sitting around eating.” – Jalen Ramsey

“I have always gone to everything mandatory. Always. But not going to voluntary workouts, I was talked bad about by some guys in the front office to the media. I was basically portrayed I guess you could say as a bum, to be honest.” – Jalen Ramsey

“That was more so, “yo, I am one of your top players and you ask me to do this tough task during this game, I want you to trust me.” That is all that was. If you would have thrown a flag and we would have lost it, I would have come to you like, ‘hey, I appreciate you trusting me but my bad.’ but the fact that he didn’t throw the challenge flag, it rubbed me the wrong way.” – Jalen Ramsey

Now that you know all about Jalen Ramsey’s net worth, and how he achieved success; let’s take a look at some of the lessons we can learn from him:

One must work and dare if one really wants to live.

To succeed in life, you need two things: ignorance and confidence.

3. Work Hard All The Time

How much is Jalen Ramsey worth?

Jalen Ramsey’s net worth is estimated to be $50 Million.

How old is Jalen Ramsey?

How tall is Jalen Ramsey?

Jalen Ramsey is an American professional football player who played his college football at Florida State where he won the BCS national championship in 2013 and was a two time ACC champion. Ramsey was a Pro Bowl selection in 2017 and 2018.

What do you think about Jalen Ramsey’s net worth? Leave a comment below.