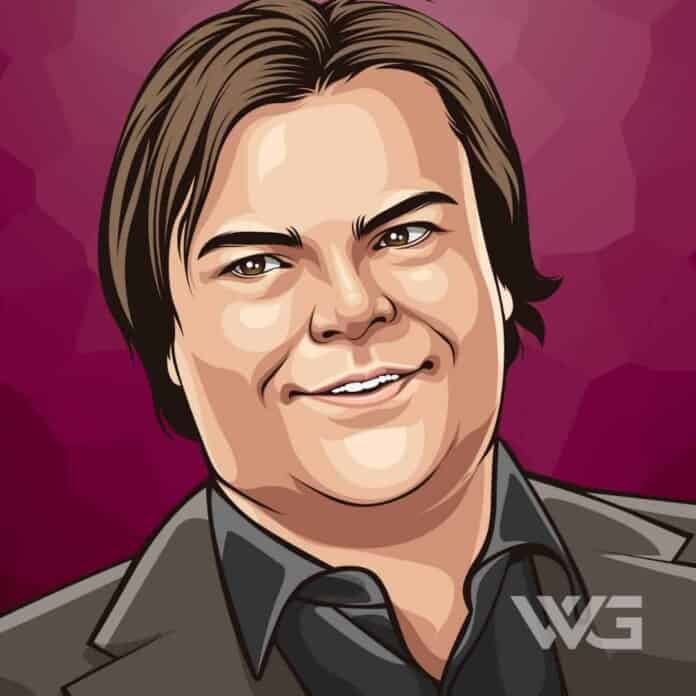 What is Jack Black’s net worth?

As of February 2023, Jack Black’s net worth is approximately estimated to be $50 Million.

Black has been nominated for two Golden Globe Awards and he is the lead vocalist of the rock group ‘Tenacious D’ which was formed in 1994.

Thomas Jacob “Jack” Black was born in Santa Monica, California on the 28th of August, 1969.

Black is the son of Thomas William and Judith Love, his mother was born Jewish and his father converted to Judaism. Black was raised in a Jewish faith and attended a Hebrew school in his early years in school.

When Black was at the age of 10 his parents divorced and he moved to Culver City with his father. For high school, Black attended Poseidon School and also Crossroads School where he excelled in drama.

The following year he dropped out from school to pursue his career in movie entertainment.

Jack Black registered in UCLA where he made acquaintance with Tim Robbins who introduced him to ‘The Actor’s Gang’. Tim Robbins introduced Jack Black to the acting world and was the reason that Jack made his acting debut in 1992.

Black appeared in various acting roles on television including ‘Northern Exposure’, ‘The Innocent’, ‘The X-Files’, ‘Picket Fences’, and ‘Life Goes On’.

Black later appeared in small roles in movies such as ‘Demolition’, ‘Airborne’, ‘The Fan’, ‘Waterworld’, ‘The Cable Guy’, ‘Dead Man Walking’ and ‘Mars Attacks!’. Garnering the attention of the movie industry with his performances he bagged leading roles in the movies including ‘Nacho Libre’, ‘Shallow Hal’, ‘Year One’, ‘Tenacious D in The Pick of Destiny’ and ‘Gulliver’s Travels’.

In 2009 he starred in ‘Yo Gabba Gabba!’ where he also sang songs. Black appeared in the dark comedy ‘Bernie’ where he played the role of ‘Bernie Tiede’. Black’s role was well received by critics.

Jack Black starred in the Dan Harmon show ‘Computerman’, ‘Laserfart’ and ‘Timebelt’. He also appeared in ‘Awesometown’ as George Washington who took credit for other presidents’ accomplishments.

Black has starred along with a wide range of successful actors, including the likes of Kevin Hart and Dwayne Johnson.

Here are some of the best highlights of Jack Black’s career:

“I’ve had so many hot, cheesy, corny loves of music in my life. I had a very intense Billy Joel period. So once you’ve really Joeled it up – there are some good periods of Joel; it’s not all hot cheese. But I can’t judge anyone else for their cheese. I’ve deep-sea dived in the Gouda.” – Jack Black

“The thing is, the kids always rebel against what the parents try to push on them so I’m going to pretend like I don’t want my son to hear the rock. I’m going to listen to it only in my private chambers. He’ll hear echoes of it and say: “What was that you were listening to papa?” And I’ll say: “Nothing son, you’re not ready.” – Jack Black

“I really wanted people to pay attention to me and like me. And the class clown thing, you know? There’s a weird desperation to the class clown when you really investigate it. Why are they trying to be the clown so much? They’re filling some kind of hole.” – Jack Black

“I just had a son and had to take him to the pediatrician and he measured his head and apparently he’s in a group in which only 14 percent of the population has a bigger head than him. Then she said: “Do you mind if I measure your head?”  So I guess that means I’m pretty full of myself. Or that I have a huge brain.” – Jack Black

View our larger collection of the best Jack Black quotes!

Now that you know all about Jack Black’s net worth, and how he achieved success; let’s take a look at some of the lessons we can learn from him:

Doing what you like is freedom. Never forget who you are. The rest of the world will not. Wear it like armor and it can never be used to hurt you.

Life isn’t always easy, but it helps if you remember that obstacles in your path are there to test you and to help you grow. If you never had a problem in your life, you wouldn’t be able to deal with life.

How much is Jack Black worth?

Jack Black’s net worth is estimated to be $50 Million.

How old is Jack Black?

How tall is Jack Black?

Black also scored a hit in the movie ‘Goosebumps’ which was No.1 at the box office on its opening weekend. Black is one of the most successful actors and comedians right now.

What do you think about Jack Black’s net worth? Leave a comment below.