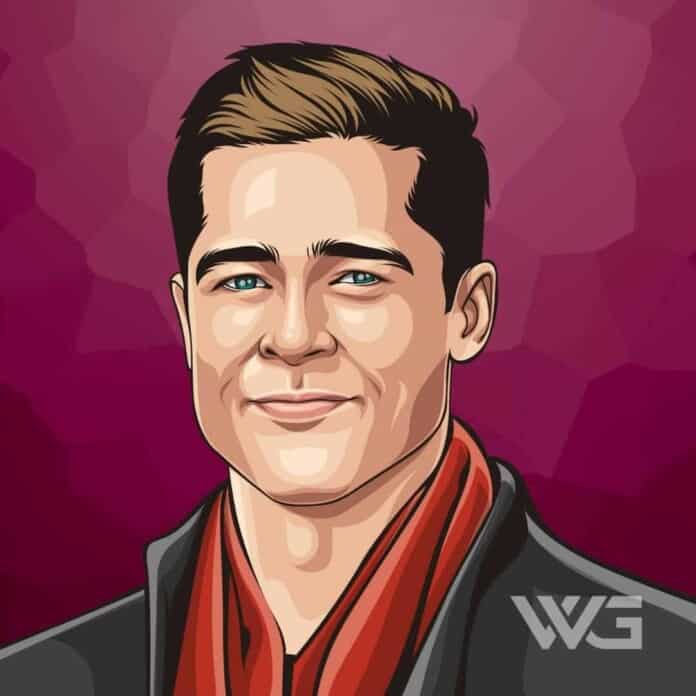 What is Brad Pitt’s net worth?

As of February 2023, Brad Pitt’s net worth is roughly $300 Million, making him one of the richest actors in the world.

William Bradley “Brad” Pitt is an American actor and film producer from Shawnee. Pitt initially gained recognition when he played the role as a cowboy hitchhiker in ‘Thelma & Louise’.

William Bradley “Brad” Pitt was born in Shawnee, Oklahoma on the 18th of October, 1963. Pitt is the son to William Alvin Pitt and Jane Etta. He was born into a conservative household and raised as a baptist.

Pitt attended Kickapoo High School in Springfield, Missouri, where he was a member of the tennis, swimming and golf teams. At first, his focus was to become a journalist but he started his acting career in 1987 when he took acting lessons from Roy London.

Pitt began his acting career in 1987 when he had minor roles in films such as ‘Less Than Zero’, ‘No Way Out’, and ‘No Man’s Land’. Pitt also appeared in two episodes in the sitcom ‘Another World’ broadcast by NBC’s television network.

The next year Pitt had a cameo role in the movie ’21 Jump Street’, during which he was signed on as the main actor for the movie ‘The Dark Side of the Sun’.

In 1994, Pitt was a part of an ensemble cast comprising Antonia Banderas, Kristen Dunst, Tom Cruise and Christian Slater in the movie ‘Interview with the Vampire’.

The following year he was cast alongside stars such as Morgan Freeman and Gwyneth Paltrow in ‘Seven’. The movie was a huge hit at the box-office, earning $327 million.

During the next few years, Pitt appeared in many successful movies such as ‘Sleepers’, ‘Meet Joe Black’, and ‘The Devil’s Own’. In 1999, Pitt was the cast in the movie ‘Fight Club’ which has come to be one of Pitt’s most popular movies.

Pitt married fellow actor and ‘Friends’ star Jennifer Aniston in the year 2000, and they divorce in 2005.

In 2001 the rising star played a major part in ‘Ocean’s Eleven’ alongside Matt Damon, George Clooney, and Julia Roberts. The film proved to a major hit at the box office with earnings of $450 million worldwide.

In 2003, he started lending his voice to animated movies such as ‘Sinbad: The Legend of the Seven Seas’s and ‘King of the Hill’.

Pitt and Angelina Jolie married in 2014, however they were divorced 2 years later due to their irreconcilable differences.

In recent years, Pitt has also starred in films such as Ad Astra, Moneyball, Inglourious Basterds, and more. Check out his best highlights below.

How Does Brad Pitt Spend His Money?

Pitt and his then partner spent a jaw-dropping $322 million to buy a yacht. They kicked out an additional $200,000 just to decorate the super-yacht.

Brad Pitt is a humanitarian. Alongside his ex Angelina Jolie, they have donated a huge amount of money throughout their careers to different charity organizations around the world.

To help provide care to the residents of Haiti, Jolie and Pitt collectively donated $1 million to Haiti’s emergency response group, Doctors Without Borders.

Pitt donated 40 orthopedic beds worth $100,000 to an Islamabad hospital.

In 2008, Pitt and Jolie donated $2 million to a clinic in Ethiopia to help fight against the health epidemics.

Here are some of the best highlights of Brad Pitt’s career:

“I had a friend who worked at a hospice, and he said people in their final moments don’t discuss their successes, awards or what books they wrote or what they accomplished. They only talk about their loves and their regrets, and I think that’s very telling.” – Brad Pitt

“What’s valuable to me has become clearer as I’ve got older. To me, it’s about the value of your time and your day and the value of the people you spend it with.” – Brad Pitt

“I grew up on certain movies, particular movies that said something to me as a kid from Missouri, movies that showed me places I’d yet traveled, or different cultures, or explained something, or said something in a better way than I could ever say. I wanted to find the movies like that.” – Brad Pitt

“When you first get opportunities, suddenly you get surrounded by a lot of people who want to make money off you but also are there to help. But they start telling you so much what you need to be and what you need to do to maintain some idea of career maintenance.” – Brad Pitt

“My father came from a very poor background, but I was very fortunate in the sense that we were never in need. My dad was determined to make sure that we didn’t want for things. He wanted to give us more opportunity than he had, a better shot at a better life.” – Brad Pitt

View our larger collection of the best Brad Pitt quotes!

Now that you know all about Brad Pitt’s net worth, and how he achieved success; let’s take a look at some of the lessons we can learn from him:

1. Make the World a Better Place

2. Chase Your Dream and Take the Lead of Faith

Making a huge decision can change the course of your life and can be a bit scary. These decisions, however, will shape the life you desire. If you chase your dream and take a lead of the faith you will become an ordinary person like everyone else.

No matter what you do, be the best at it. When you put your heart into doing your best, the universe will reward you for the work that you have done. Be the best in what you do, always.

How much is Brad Pitt worth?

Brad Pitt’s net worth is estimated to be $300 Million.

How old is Brad Pitt?

How tall is Brad Pitt?

There’s no doubt that Brad Pitt will continue to be one of the richest actors in the world. Pitt has been a successful actor since he was a teenager and today he has an enormous net worth.

What do you think about Brad Pitt’s net worth? Leave a comment below.

Shooting guard and small forward for the Dallas Mavericks, Tim Hardaway Jr., has built a fortune as one of the NBA's most talented players.