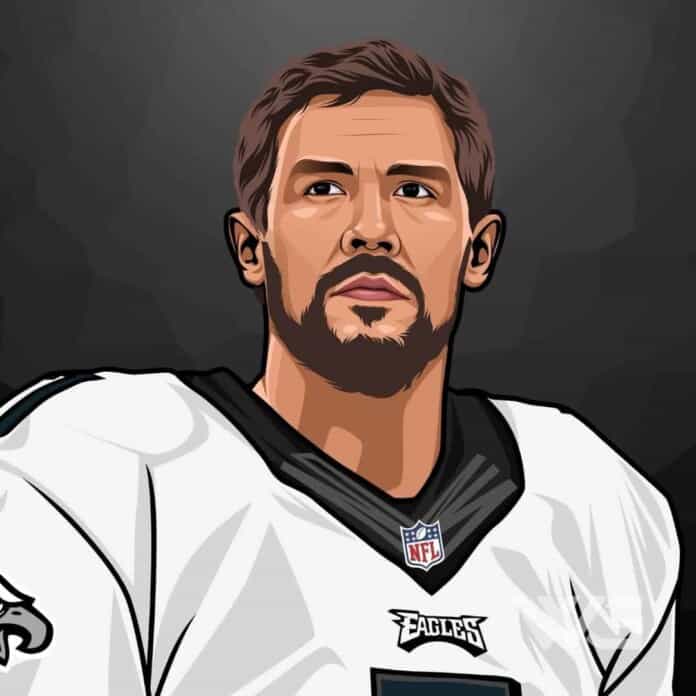 What is Sam Bradford’s net worth?

Bradford played in the NFL for nine seasons, most notable with the St. Louis Rams and Minnesota Vikings.

He was also a member of the Philadelphia Eagles and Arizona Cardinals. As a senior quarterback in 2005, he threw 2,029 years and 17 touchdowns in 12 games.

Sam Bradford was born on the 8th of November, 1987, in Oklahoma.

Bradford is the son of Kent and Martha Bradford. He attended Putnam City North High School in Oklahoma City, where he played football, basketball, baseball, and golf.

Bradford earned All-City honors as a junior quarterback in football. Following his senior season, he was named to the Oklahoma Coaches Association All-State Team and was a Second-Team All-State pick by The Oklahoman.

In 2010, Bradford made an announcement after undergoing season that he would enter the 2010 NFL Draft. He would commence his professional NFL career after being picked 1st overall by the St. Louis Rams.

During his first season in the NFL, he set a league record for the most completions by a rookie. He earned NFL Offensive Rookie of the Year honors. Bradford made contributions to the St. Louis Rams, Philadelphia Eagles, Minnesota Vikings, and Arizona Cardinal offensive efforts from 2010 to 2018.

The same year, he signed the richest NFL contract ever, which included a record $50 million in guaranteed money. When he retired, he had earned more than $130 million in salary alone during his time in the NFL.

During his career, he played a total of 83 games. At Arizona, he earned $5 million per game.

How Does Sam Bradford Spend His Money?

Sam Bradford spends his money on real estate and golf.

Bradford owns a home in Oklahoma City. The home comes with five bedrooms, six bathrooms, and he purchased it back in 2012 for $2,683,716.

Bradford spends his time as a scratch golfer, and he is also an avid ice hockey fan. Playing golf and watching ice hockey games can cost a lot of money.

Here are some of the best highlights of Sam Bradford’s career:

“My favorite was always whichever sport was in season. I think these days, it’s almost saddening to see kids who are 10 or 11 and are forced to choose one sport and specialize in that sport and play that sport year-round. By playing different sports… you become a better all-around athlete.” – Sam Bradford

“I do realize that God has given me so many blessings in my life. I mean, not only with football but with the family that He’s blessed me with and the opportunity He’s given me to grow up in a home that embraces God.” – Sam Bradford

“The products in my bathroom are pretty minimal. Issey Miyake makes great cologne, and I use everything from Zirh, especially their shave scream. I really like Mario Badesco aftershave, too. It’s amazing.” – Sam Bradford

“For a long time, I thought I was going to play basketball. There are not many 6-4 white guys playing the three spot in the NBA, so I realized I probably didn’t have much of a future in basketball, and that football was probably going to be my best bet.” -Sam Bradford

Now that you know all about Sam Bradford’s net worth and how he achieved success; let’s take a look at some of the lessons we can learn from him:

1. Stay In the Moment

Music really gets Bradford going, so he always got to make sure he has his iPod to give him the right energy to work out.

3. Know When To Quit

Sometimes you will notice when you’re done. Listen to your body and move on with your life.

How much is Sam Bradford worth?

Sam Bradford’s net worth is estimated to be $70 Million.

How old is Sam Bradford?

How tall is Sam Bradford?

Sam Bradford is a retired American football player who played from 2010 to 2018.

During his NFL career, he earned $130 million in salary alone. He was born in Oklahoma, and he attended Putnam City North High School.

He was a local star in school when it came to football, basketball, baseball, and not to mention golf.

What do you think about Sam Bradford’s net worth? Leave a comment below.

What is Whoopi Goldberg's net worth? Introduction  As of ,...