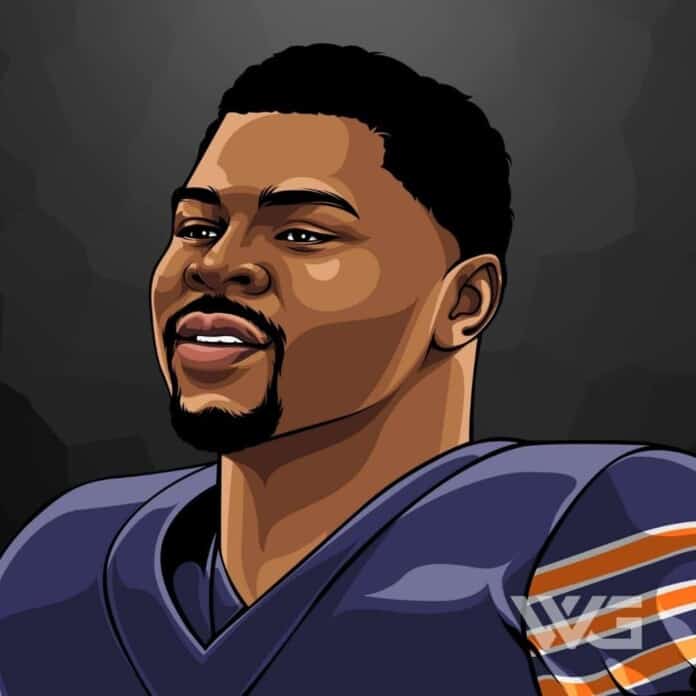 What is Khalil Mack’s net worth?

Khalil Mack is an American football outside linebacker for the Chicago Bears of the NFL. He played college football at Buffalo, and was drafted by the Oakland Raiders fifth overall in the 2014 NFL Draft.

Khalil Delshon Mack was born on the 22nd of February, 1991, in Florida. Mack is the son to Yolanda and Sandy Mack Sr., a program specialist, in Fort Pierce, Florida.

His father introduced him to sports at the age of five. Mack took an early liking to baseball and basketball although he played Pop Warner football.

Leading up to the 2014 NFL Draft, Mack was projected as a high first-round pick in many mock drafts.

He was selected with the fifth overall pick by the Oakland Raiders, making him the highest selected Buffalo player ever, and the first (and only) selected in the first round.

In 2015, the NFL amended the league’s uniform numbering rules to allow linebackers to wear the numbers 40–49. As a result, Mack considered reverting from the number 52 to 46, the number he wore during his college career, but ultimately decided not to do so.

On November 27, in a 35–32 victory over the Carolina Panthers in Week 12, Mack recorded his first career interception off of Panthers quarterback Cam Newton and returned it six yards for his first career touchdown.

In 2018, following Mack’s holdout through the entire preseason, the Raiders traded him, a 2020 second-round pick, and a conditional fifth-round draft pick in 2020 (condition unknown) to the Chicago Bears for 2019 (24th overall, Josh Jacobs) and a 2020 first-round pick; as well as 2019 sixth and 2020 third-round selections.

Here are some of the best highlights of Khalil Mack’s career:

“I felt like a coach. I just wanted to do what I could as far as helping guys understand what was going to happen early and get the best feedback I could and be a great teammate.” – Khalil Mack

“When you do something, do it right the first time… When you’re talking about hard-working when you go out of your way to mop floors and strip them and do all those things, it’s kind of like, ‘Dang.” – Khalil Mack

“One of my best friends got recruited to go to Miami, and another one went to South Florida. You’re talking about two big schools in Florida, and I had to go all the way up to Buffalo. I was like, ‘OK, I have to put in some more work.’ That’s just the way it has been ever since. ” – Khalil Mack

Now that you know all about Khalil Mack’s net worth, and how he achieved success; let’s take a look at some of the lessons we can learn from him:

Success requires hard work. If you’re not working very hard, you’re probably not on the path to success; you may be on a treadmill. It takes hard work to succeed. It takes enough discipline to create the right habits, an attitude that doesn’t relent, and a work ethic that few are willing to bear.

In the game of life, you have the ball. Don’t try to give the ball to fate, luck, or chance. Take the ball and play the game. Can you even decide on the game you play? You have the ball, you decide the game, life has been set up for you to win!

If you see yourself as a success, you will eventually succeed. Act as the successful do, don’t be timid or shy; play like you’re going to win the game.

How much is Khalil Mack worth?

Khalil Mack’s net worth is estimated to be $30 Million.

How old is Khalil Mack?

How tall is Khalil Mack?

Khalil Mack is an American professional football player who won the Butkus Award in 2016 and 2018 and was the NFL Defensive Player of the Year in 2016.

In 2018 he was traded to the Bears and signed a six-year deal for $141 million with $90 million guaranteed which made him the highest-paid defender in NFL history.

What do you think about Khalil Mack’s net worth? Leave a comment below.