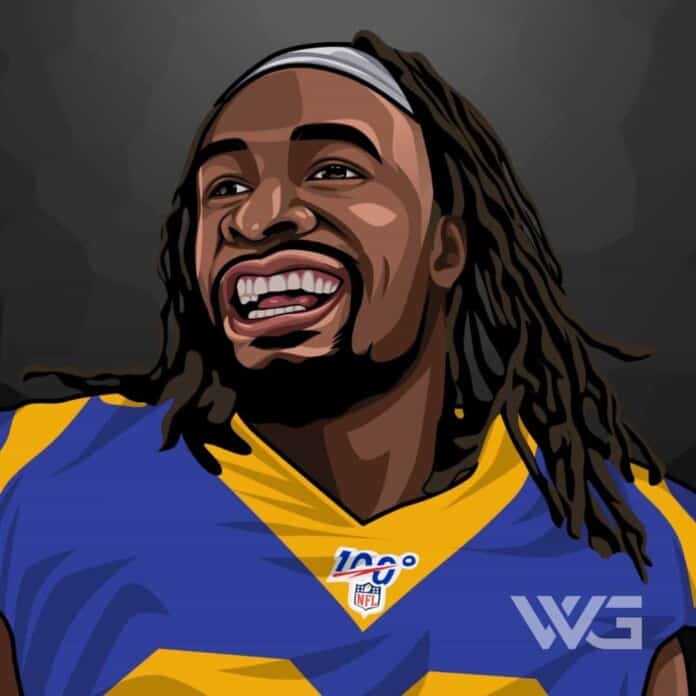 What is Todd Gurley’s net worth?

Todd Gurley is an American football running back for the Los Angeles Rams of the NFL.

Gurley played college football in Georgia where he earned All-SEC honors in 2012 and 2013. Gurley was drafted by the St. Louis Rams with the tenth overall pick in the 2015 NFL Draft.

Todd Jerome Gurley II was born on the 3rd of August, 1994, in Baltimore, Maryland.

His family moved to Tabaro Edgecombe County in North Carolina, where he grew up and attended High School.

He attended the Tarboro High School, and there he participated in several sports such as basketball, track, football and also soccer.

Gurley was drafted as the 10th overall pick to the St. Louis Rams. He was the first Running back to be selected in the 2015 NFL draft. The contract was for four years, with the possibility of extending into the fifth year.

His debut game was against the Pittsburgh Steelers, and Todd was soon starting in most games of the season. He completed his Rookie season with 1110 rushing yards and 10 touchdowns. He was listed as the NFL Top-100 player of the year 2016 by his peers.

His next season wasn’t as good as his Rookie with him finishing with 885 rushing yards and 6 touchdowns, ranking him to the 17th position in the NFL.

In his 2017 season, he put in more effort, and he was rewarded for his efforts. He was given the offensive player of September, and he was also named the Offensive Player of the week for two consecutive weeks.

Gurley’s contract with the Rams was extended for five-years in 2018 with $60 million and $45 million guaranteed. This made him the highest-paid running back in the NFL.

Here are some of the best highlights of Todd Gurley’s career:

“Safe to say that game went good, I got to meet Gronk and hang out with him playing the game, honestly I had one of my best Madden games I’ve ever had. I don’t know how I did it, but( Rams quarterback Jared) Goff came through in the clutch for me. It was a great time.” – Todd Gurley

“This is exciting, were out here in ATL for Super Bowl 53 playing against one of the greatest quarterbacks of all time, it’s exciting to be back in Georgia where I went to school. SUPER BOWL LIII : 5 PLAYERS TO KNOW ON THE New England Patriots ‘ AND RAMS.” – Todd Gurley

“No one in college football or the SEC can tackle me by themselves.” – Todd Gurley

Now that you know all about Todd Gurley’s net worth, and how he achieved success; let’s take a look at some of the lessons we can learn from him:

Success has a lot to do with luck, but it also involves a lot of really hard work.

Hard work doesn’t guarantee success, but it does enhance its chances.

3. It’s Not About Winning Or Losing

To be a champion, you have to see the big picture. It’s not about winning and losing. It’s about embracing the pain that you’ll experience at the end of a race and not being afraid.

How much is Todd Gurley worth?

Todd Gurley’s net worth is estimated to be $4 Million.

How old is Todd Gurley?

How tall is Todd Gurley?

Gurley was named the NFL Offensive Rookie of the Year in 2015 and was also selected to the Pro Bowl and was a second-team All-Pro.

As of January 2023, Todd Gurley’s net worth is approximately $4 Million.

What do you think about Todd Gurley’s net worth? Leave a comment below.