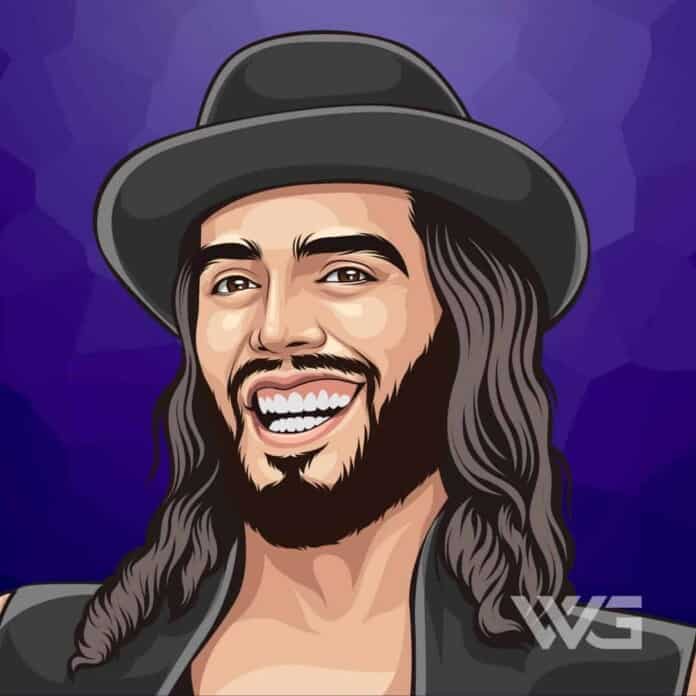 What is Russell Brand’s net worth?

As of November 2022, Russell Brand’s net worth is approximately $20 Million.

Russell Edward Brand is an English actor, comedian, radio host, and author from Grays. Brand initially got recognition when he worked as the host of Big Brother’s Big Mouth.

He has his first major film role in the romantic comedy-drama film ‘Forgetting Sarah Marshall’. Since then Brand has also worked as a voice actor and a comedian.

Russell Edward Brand was born in Grays, England on the 4th of July, 1975. Brand is the only child of Ronald Henry Brand and Barbara Elizabeth. His parents divorced when he was six months old, and he was raised by his mother.

When he was 8 years old, his mother contracted uterine cancer, and then breast cancer one year later. When Brand was 16 years old, he left the home because of disagreements with his mother’s partner. The consequences of that led him to illegal drugs such as LSD, ecstasy, and cannabis.

Russell Brand has always had a sharp personality and a creative bend of mind. In 2000, Brand came out with his talent in public by doing a stand-up comedy at the Hackney Empire New Act of the Year. During the same time, he toured various nightclubs in Ibiza and England for the show ‘Dancefloor Chart’ on MTV.

Brand left MTV in 2002, and began working as a host with Matt Morgan, he also appeared on ‘Cruise of the Gods’ and ‘White Teeth’. His breakthrough came in 2004 when he hosted ‘Big Brother’s E-forum’.

In 2005, Brand was offered a lot of work, one of them was to perform on the television and perform in BBC’s sitcom ‘Blesses’. During the same time, he also got a British TV debate comedy show ‘Russell Brand’s Got Issues’ which made him into a household name.

Brand did a phenomenal performance in the romantic comedy film in 2011 titled ‘Arthur’ which was a remake of the 1981 film. The movie itself did commercially well, and he was nominated for Teen Choice Award and 32nd Golden Raspberry Awards.

As of November 2022, Russell Brand’s net worth is estimated to be roughly $20 Million.

Here are some of the best highlights of Russell Brand’s career:

“It’s difficult to believe in yourself because the idea of self is an artificial construction. You are, in fact, part of the glorious oneness of the universe. Everything beautiful in the world is within you. No one really feels self-confident deep down because it’s an artificial idea.” – Russell Brand

“Really, people aren’t that worried about what you’re doing or what you’re saying, so you can drift around the world relatively anonymously: you must not feel persecuted and examined. Liberate yourself from that idea that people are watching you.” – Russell Brand

“We all need something to help us unwind at the end of the day. You might have a glass of wine, or a joint, or a big delicious blob of heroin to silence your silly brainbox of its witterings but there has to be some form of punctuation, or life just seems utterly relentless.” – Russell Brand

“The mentality and behavior of drug addicts and alcoholics are wholly irrational until you understand that they are completely powerless over their addiction and unless they have structured help, they have no hope.” – Russell Brand

“My dad’s philosophy was (and I think still is) that life is a malevolent force, which seeks to destroy you, and you have to struggle with it. Only those who are hard enough will succeed. Most people get crushed, but if you fight, in the end, life will go, “Fucking hell. This one’s serious. Let him through.” – Russell Brand

“No-one really feels self-confident deep down because it’s an artificial idea. Really, people aren’t that worried about what you’re doing or what you’re saying, so you can drift around the world relatively anonymously: you must not feel persecuted and examined. Liberate yourself from that idea that people are watching you.” – Russell Brand

View our larger collection of the best Russell Brand quotes!

How much is Russell Brand worth?

Russell Brand’s net worth is estimated to be $20 Million.

How old is Russell Brand?

How tall is Russell Brand?

Russell Brand is mostly known as the host of Big Brother’s Big Mouth. Since he had his first major film debut, he has been very popular with the audience. However, Brand has worked with stars such as Jonah Hill, Jennifer Garner, Tom Cruise, and Julianne Hough.

As of November 2022, Russell Brand’s net worth is estimated to be roughly $20 Million.

What do you think about Russell Brand’s net worth? Leave a comment below.