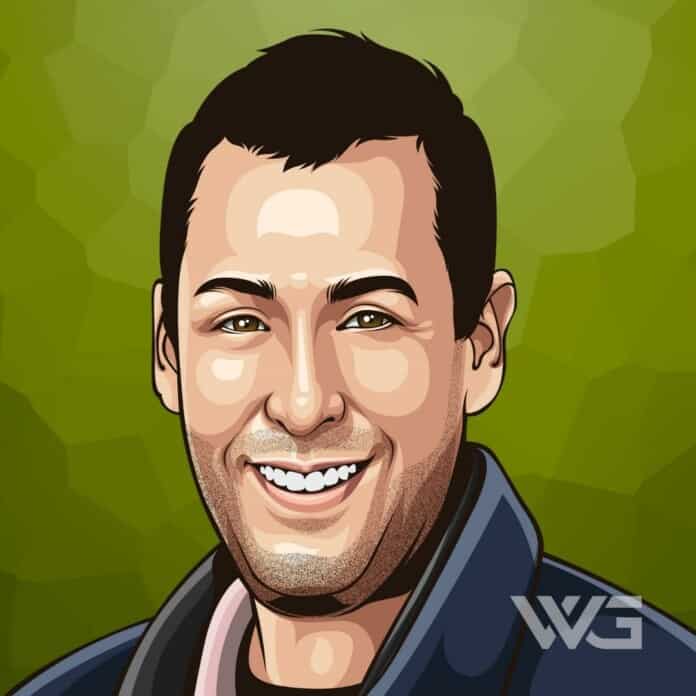 What is Adam Sandler’s net worth?

As of February 2023, Adam Sandler’s net worth is estimated to be $420 Million. Adam Sandler is an American producer, comedian, director, and actor from Brooklyn. Sandler is best known from the films ‘Punch-Drunk Love’ and ‘The Wedding Singer’.

He is also known for comedy but has also received critical praise for his dramatic work.

Adam Sandler was born on the 9th of September, 1966, in Brooklyn, New York.

Sandler is the son of Judith, a nursery school teacher, and Stanley Sandler, an electrical engineer. His family is Jewish and descends from Russian Jewish immigrants on both sides.

Sandler grew up in Manchester, after moving there when he was 6 years old. He attended Manchester Central High School, and as a teen, he was in BBYO, a popular Jewish youth group.

Sandler began his career in 1995 when he received his first film role. Numerous films followed, including ‘Happy Gilmore’ in 1996, ‘The Wedding Singer’, ‘The Water Boy’, ‘Big Daddy’, and ‘Little Nicky’.

In 2003, he starred opposite Jack Nicholson in the comedy ‘Anger Management”. Sandler re-teamed with Barrymore for another romantic comedy ’50 First Dates’ (2004), which fared well at the box office.

Sandler took a more dramatic turn when he starred in the drama comedy ‘Spanglish’ (2004) as a husband experiencing trouble with his wife and developing a relationship with his housekeeper. In 2008, he portrayed ‘Zohan’ in the film ‘You Don’t Mess With the Zohan’. He produced and co-wrote the film.

Sandler also starred in the 2009 summer comedy, Funny People, which was directed by Judd Apatow.

He enjoyed great success with the 2010 comedy film ‘Grown Ups’ alongside stars Salma Hayek, Kevin James and Chris Rock. Sandler wrote the script for the movie and became huge at the box-office. In 2012, he lent his voice for the animated film ‘Hotel Transylvania’ and starred in ‘Grown Ups 2’ in 2013.

In 2016, he teamed up with David Spade in the Netflix comedy, ‘The Do-Over’. He reprised his voiceover work in ‘Hotel Transylvania 3’ in 2018.

How Does Adam Sandler Spend His Money?

Adam Sandler ensures he spends his money on good causes. A few years ago, Sandler donated $1 million to the Boys and Girls Club in his hometown. Later, he donated $2,100 to a presidential campaign.

Sandler is known to contribute generously to causes that help children, such as charities that assist kids with autism. Toys for kids in need is another charity that he helps out. Adam also deserves praise for donating 400 PlayStations to the children of war-torn Israel.

Adam does not mind spending big bucks on a big, fat vacation. He has an intense love for luxury golf carts.

He owns a costly one and has been clicked driving his daughters around in it on the weekends. He owns a Pennwick golf cart, which is considered the most exclusive and expensive golf cart customizer in the world.

Here are some of the best highlights of Adam Sandler’s career:

“I’m not comfortable being around too many people. So most of the characters I play are people who don’t always feel comfortable beyond their small circle of friends.” – Adam Sandler

“I bought my parents some stuff. That feels kind of good to be able to do that. I got them a place in Florida. I think I’m allowed to say that – I hope my dad doesn’t get mad at me. But I don’t spend money on myself. I don’t like myself enough yet. But the people I love, I like spending the cash on them.” – Adam Sandler

“I mean, I look at my dad. He was twenty when he started having a family, and he was always the coolest dad. He did everything for his kids, and he never made us feel like he was pressured. I know that it must be a great feeling to be a guy like that.” – Adam Sandler

“I never had a speech from my father ‘this is what you must do or shouldn’t do’ but I just learned to be led by example. My father wasn’t perfect.” – Adam Sandler

“Feels good to try, but playing a father, I’m getting a little older. I see now that I’m taking it more serious and I do want that lifestyle.” – Adam Sandler

View our larger collection of the best Adam Sandler quotes!

3 Lessons from Adam Sandler About Parent-ship and Life

Now that you know all about Adam Sandler’s net worth, and how they achieved success; let’s take a look at some of the lessons we can learn from them:

1. Money and power aren’t everything

Even if you have all the money in the world, it won’t necessarily buy you happiness. You should never let money change who you are at your core. No matter how much money or power you have, stay humble and true to yourself.

2. Don’t ever let anything stand in your way

In our lives and careers, we will often come across people who underestimate us and think that we are not capable of achieving great things. But sometimes it is easier to work harder when we know that people are not expecting much from us, and the simple act of proving them wrong can often offer all the motivation we need.

3. Make the most of second chances

There are times in life when we are faced with an opportunity for a second chance at something we may not have enjoyed the first time around, but also may not have gained everything that we could have from it.

When given this rare opportunity, it is important to do our best to make it better than the first. Learning from our mistakes is often the biggest life lesson of all.

How much is Adam Sandler worth?

Adam Sandler’s net worth is estimated to be $420 Million.

How old is Adam Sandler?

How tall is Adam Sandler?

Throughout Adam Sandler’s acting and producing, he has been able to amass a massive personal fortune and can demand some of the highest pay-checks in the entertainment business.

He is one of Hollywood’s most bankable stars which allows him to command $20 million per movie along with very impressive percentages of films GROSS profits.

What do you think about Adam Sandler’s net worth? Leave a comment below.