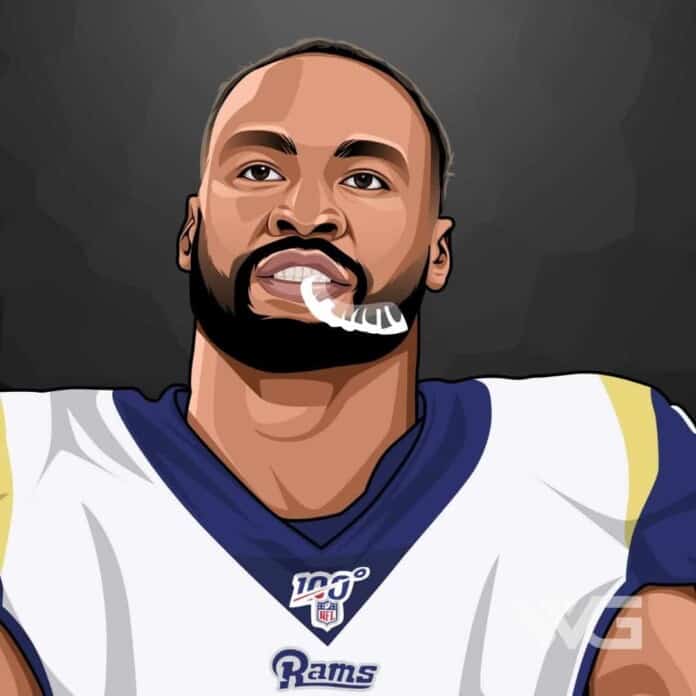 What is Robert Woods’ net worth?

Robert Woods is an American football wide receiver for the Los Angeles Rams of the NFL.

Woods played college football at USC, where he was recognized as a consensus All-American. He was drafted by the Buffalo Bills in the second round of the 2013 NFL Draft.

Robert Thomas Woods was born on the 10th of April, 1992, in Gardena, California.

Woods attended and played high school football and ran track at Junípero Serra High School in Gardena, California, where he was a teammate of George Farmer and Marqise Lee.

The Buffalo Bills drafted Woods in the second round of the 2013 NFL Draft. Woods was the fifth wide receiver drafted and was the first of two wide receivers selected by the Bills in 2013.

The same year, the Buffalo Bills signed Woods to a four-year, $4.86 million contract that includes $2.49 million guaranteed and a signing bonus of $1.91 million.

In week 4 against the Tampa Bay Buccaneers, Woods caught 13 passes for 164 yards in the 55-40 loss. During Week 13 against the Arizona Cardinals, Woods finished with 13 catches for 172 receiving yards as the Rams won 34-7.

Here are some of the best highlights of Robert Woods’ career:

“Everything’s good. Long process trying to get back, trying to get healthy. Guys did well prepping up to this. Getting wins and everything, and I’m finally back trying to finish it off with the team.” – Robert Woods

“I was going out there and running routes and everything, but I just wanted to play it cautious, play it safe. It’s a long season. We’re looking forward to playing these games, so I wanted to make sure I’m healthy and can last.” – Robert Woods

“I was very grateful that I didn’t need surgery and I didn’t hit anything important. Just looking at Aaron Rodgers‘s injury, he broke his. Fortunately, mine wasn’t broken. Just a little injury. Being able to bounce back and able to recover quickly enough to return this season is a big testament to our training staff and our coaches.” – Robert Woods

“Their unity. They play well as a unit on the defensive side and offensive side. Just looking at them on a defensive side, they play as a unit, they communicate well, they fly over, and their communication from Earl [Thomas] to Bobby Wagner at the linebacker position.” – Robert Woods

Now that you know all about Robert Woods’ net worth, and how he achieved success; let’s take a look at some of the lessons we can learn from him:

There is no such thing as work-life balance. Everything worth fighting for unbalances your life.

Work hard now, suffer and keep it up. Rewards are at the edge.

Inspiration is the windfall from hard work and focus.

How much is Robert Woods worth?

Robert Woods’ net worth is estimated to be $116 Million.

How old is Robert Woods?

How tall is Robert Woods?

Robert Woods is an American football player who plays in the NFL. He was drafted by the Buffalo Bills in the second round of the 2013 NFL Draft.

What do you think about Robert Woods’ net worth? Leave a comment below.

What is Gucci Mane's net worth? Introduction As of ,...