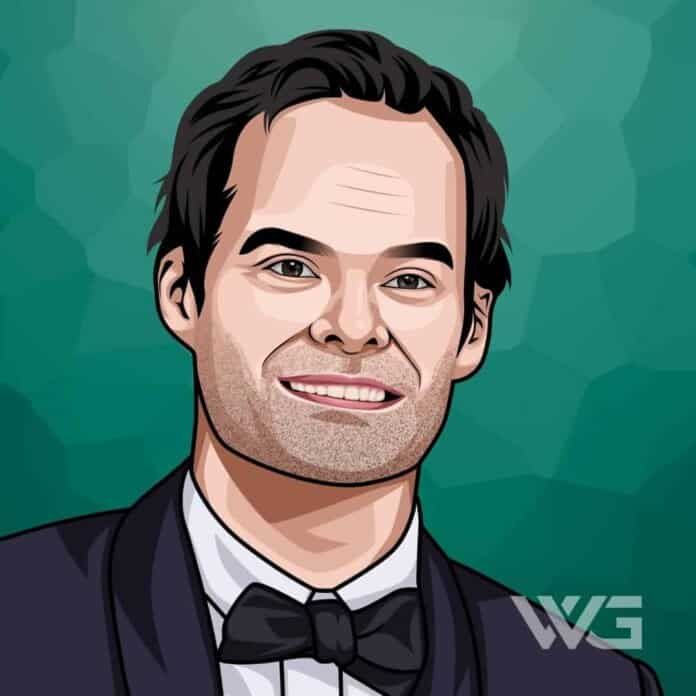 What is Bill Hader’s net worth?

As of February 2023, Bill Hader’s net worth is approximately $12 Million.

He rose to fame as a cast member on the NBC variety series ‘Saturday Night Live’ for which he received four Primetime Emmy Award nominations and a Peabody Award.

William Thomas Hader Jr. was born on the 7th of June, 1978, in Oklahoma. In 1999, Bill Hader dropped out of his college and moved to Los Angeles. He began working as a production assistant and went on to work in the feature films ‘Spider-Man,’ ‘James Dean’ and ‘Collateral Damage.’

Hader also appeared in the documentary ‘Empire of Dreams: The Story of the Star Wars Trilogy’ in 2004. He then served as a post-production assistant in the reality TV series ‘The Surreal Life’.

In 2005, while working on ‘Iron Chef America,’ Hader was hired as a featured player on ‘Saturday Night Live’. The following year, he made his film debut in the comedy ‘You, Me and Dupree’. Soon after this, he played a wide variety of roles in movies, including ‘Knocked Up,’ ‘The Brothers Solomon,’ ‘Hot Rod’ and ‘Superbad.’

In 2009, the American artiste had voice roles in ‘Xavier: Renegade Angel’ and ‘Aqua Teen Hunger Force’. He also teamed up with other famous actors in the movies ‘Adventureland’, ‘Night at the Museum: Battle of the Smithsonian’, ‘Year One’ and ‘Ice Age: Dawn of the Dinosaurs’ the same year.

As a voice artist in ‘The Venture Bros’. Soon after this, he appeared as an athletic trainer in ‘Funny or Die Presents’.
From 2012 to 2014, the actor contributed to ‘Bob’s Burgers’ and ‘The Mindy Project’.

Then in 2015, Hader had his first-ever leading man role in the romantic-comedy movie ‘Trainwreck’. The same year, he lent his voice to the character of Fear in the Disney-Pixar film, ‘Inside Out’.

He then did voice work for ‘The Angry Birds Movie’, ‘Finding Dory’ and ‘Power Rangers’.

Here are some of the best highlights of Bill Hader’s career:

“Oddly enough, I have really bad stage fright – getting up in front of people. And I made a living going on live television.” – Bill Hader

“I really enjoyed playing Vinny Vedecci, the Italian talk show host. He was the first character I ever came up with where I gave him a name and a way of dressing.” – Bill Hader

“When I got to Saturday Night Live, it was a lot like going from pre-school to Harvard, and it took a long time to figure stuff out.” – Bill Hader

“A lot of times I think people when they’re doing a movie that’s a family movie, they’re worried about this being too esoteric or too dark or too weird.” – Bill Hader

“I move out here, and next thing I know I’m 25, and the only thing I’ve heard is, ‘Can you get a coffee, can you hurry up with the thing, blah blah blah.’ It was nice doing something and hearing someone go, ‘Hey, you’re good at this.’” – Bill Hader

Now that you know all about Bill Hader’s net worth, and how he achieved success; let’s take a look at some of the lessons we can learn from him:

Remember tomorrow has its own plans so if you plan for tomorrow don’t think tomorrow will favor you.

2. Be In The Present

You can’t worry about the future so much that you miss out on the present.

3. Life Is Not Always Great

Sometimes the weak will last for years, while the strong will suddenly collapse and die.

How much is Bill Hader worth?

Bill Hader’s net worth is estimated to be $12 Million.

How old is Bill Hader?

How tall is Bill Hader?

Bill Hader is best known for his work in the parody ‘Documentary Now’, the series ‘South Park’ and the variety show ‘Saturday Night Live’ for which he has earned three Emmy nominations.

He is also popular for his comedy work in many movies including ‘You, Me and Dupree’, ‘Night at the Museum: Battle of the Smithsonian’, ‘Men in Black 3’ and ‘Maggie’s Plan’.

What do you think about Bill Hader’s net worth? Leave a comment below.