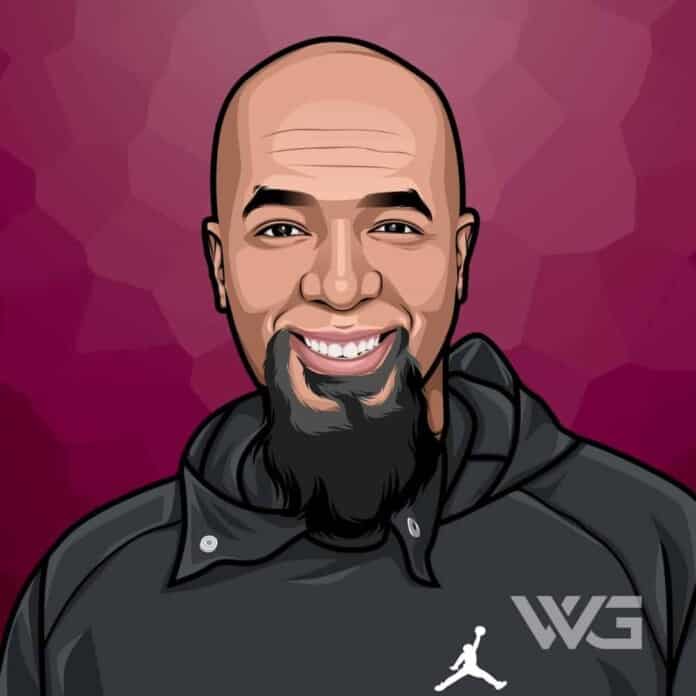 What is Tech N9ne’s net worth?

Tech N9ne is an American rapper, singer, and songwriter.

In 1999, N9ne and his business partner Travis O’Guin founded the record label Strange Music. Since then, he has sold over two million albums and has had his music featured in film, television, and video games.

He won the Left Field Woodie at the Woodie Awards in 2009.

Aaron Dontez Yates was born on the 8th of November, 1971, in Missouri. Yates began rapping when he was very young, and he would rap the letters of his name to remember how to spell it.

Yates’s father, Carlton Cook, was estranged from the family, and his mother had epilepsy and lupus. This inspired him to search for God. He would explore an abandoned building with his best friend, hoping to catch a ghost on film. Yates attended Southwest High School in Kansas City.

In 1993, Tech N9ne called his childhood friend, declaring that he would form a new group called ‘Nnutthowze.’ Eventually, the group was formed, and they did a few shows. In 1999, he released his debut album ‘The Calm Before the Storm.’ The album contains fifteen tracks. Some of the most notable tracks include ‘Questions.’

N9ne dropped his 7th album ‘Killer’ in 2008. It debuted on the 12th spot on the Billboard 200, selling 36,199 copies in its first week alone. Later that year, he had more than one million albums sold over his entire catalog.

The following year, N9ne dropped two albums ‘Sickology 101’ and ‘Collabos.’ He released ‘K.O.D.’,, another success debuting at the 14th spot on the US Billboard 200 chart.

Tech N9ne released another album, ‘The Gates Mixed Plate’ in 2010. The album sold 17,000 copies in its first week. The same year, he made his acting debut in ‘Big Money Rustlas.’

How Does Tech N9ne Spend His Money?

Tech N9ne is one of the richest rappers in the hip hop industry and his music has sold millions of copies worldwide. When it comes to his spending, he spends his money on endorsements and jewelry.

N9ne teamed up with Boulevard Brewing Company to create a new beer. It was released 18th of June, 2018. The beet was named Bou Lou as a reference to his song ‘Caribou Lou.’

N9ne is one of the most experienced rappers in the game, and his hop-hop jewelry stays classy. He owns a long gold chain and a tennis chain.

Here are some of the best highlights of Tech N9ne’s career:

“The reason why people still come to Tech N9ne shows is that they never know what to expect. They know it’s gonna be something wild. From generation to generation, I’ve seen it. The parents are bringing the kids, and then the kids start comin’ themselves. It’s crazy, man.” – Tech N9ne

“My mom and my aunties are really devout Christians. My mom married a Muslim when I was 12, so I got teachings from both sides and then other sides because I wanted to find out which way to go. So not only Christianity and Islam, but Confucianism, Shintoism, Taoism, Buddhism, and Judaism. I tried to read everything.” – Tech N9ne

“I have a certain comfort with the darkness now because it’s been so relevant in my life for so long, with my mom being sick and finally passing and the people changing as you get bigger and bigger. So ‘A Certain Comfort’ is about that. You can bring all the evil you want – I’ma make it disappears.” – Tech N9ne

Now that you know all about Tech N9ne’s net worth and how he achieved success; let’s take a look at some of the lessons we can learn from him:

You have to distance yourself from hate, period.

2. Be Honest and Provocative

It isn’t easy to stay relevant for many years, but Tech N9ne somehow managed to do so. He is honest and provocative.

When you think you have something special, you can’t be the only one who thinks it; everybody else has to agree.

How much is Tech N9ne worth?

Tech N9ne’s net worth is estimated to be $18 Million.

How old is Tech N9ne?

How tall is Tech N9ne?

Tech N9ne is a popular American rapper and record producer. N9ne started rapping from an early age, and he left home at the age of 17. He had his first glimpse of success with his third group ’57th Street Rogue Dog Villians’.

When he was 28 years old, he dropped his debut album ‘The Calm Before the Storm.’ He co-founded his record Strange Music’ in the same year.

By 2018, he had released 20 albums, appeared in four films and 11 documentaries.

What do you think about Tech N9ne’s net worth? Leave a comment below.

John McEnroe is regarded by many as the greatest tennis player of the modern era who earned a fortune on tennis courts around the world.