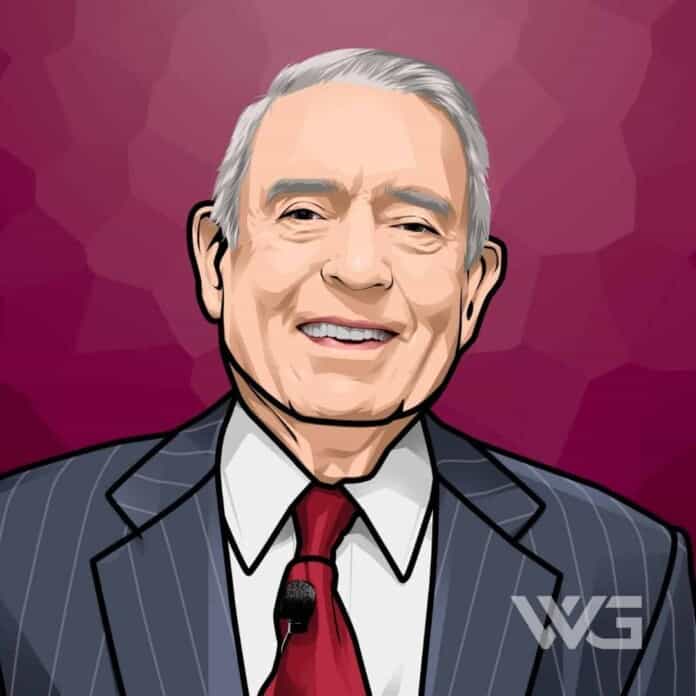 What is Dan Rather’s net worth?

Dan Rather is an American journalist.

He is also a former national evening news anchor. He started his career in Texas, becoming a national name after his reporting saved thousands of lives during Hurricane Carla in September 1961.

Rather created the first radar weather report. In his first national broadcast, Rather helped initiate the successful evacuation of 350,000 people.

Irvin is the son of Daniel Irvin Rather Sr. and Byrl Veda Page. He attended Lovett Elementary School and Hamilton Middle School. In 1950, he graduated from John H. Reagan High School in Houston.

A few years later, he earned a bachelor’s degree in journalism.

He was the editor of the school newspaper, The Houstonian. Rather was also a member of the Caballeros, the founding organization of the Epsilon Psi chapter of the Sigma Chi fraternity.

In 1981, Rather was promoted to a news anchor for the CBS Evening News. Along with Peter Jennings at ABC News and Tom Brokaw at NBC News, he was one of the “Big Three” nightly news anchors in the U.S. from the 1980s through the early 2000s.

In 2005, he left the anchor desk. He continued to work with CBS until 2006 when he was fired. The following year, Rather filed a $70 Million lawsuit against CBS and its former parent company Viacom.

He accused the network and its ownership and management of making him a “scapegoat” in the Killian story. An intermediate New York state appeals court dismissed the lawsuit in September 2009.

Since then, he has hosted many other projects for AXS TV, including ‘Dan Rather Presents,’ which provides in-depth reporting on broad topics such as mental health care or adoption, and ‘The Big Interview with Dan Rather,’ in which he conducts long-form interviews with musicians and other entertainers.

How Does Dan Rather Spend His Money?

Dan Rather spends some of his money on real estate and donations to different schools.

Rather owns a beautiful home in Livingston Manor, New York.

Rather gave away $2 million to a university in Texas.

Here are some of the best highlights of Dan Rather’s career:

Favorite Quotes from Dan Rather

“Music is important. It says things your heart can’t say any other way, and in a language, everyone speaks. Music crosses borders, turns smiles into frowns, and vice versa. These observations are shared with a hope: that, when schools cut back on music classes, they really think about what they’re doing – and don’t take music for granted.” – Dan Rather

“The press is a watchdog. Not an attack dog. Not a lapdog. A watchdog. Now, a watchdog can’t be right all the time. He doesn’t bark only when he sees or smells something dangerous. A good watchdog barks at things that are suspicious.” – Dan Rather

“From the streets of Cairo and the Arab Spring, to Occupy Wall Street, from the busy political calendar to the aftermath of the tsunami in Japan, social media was not only sharing the news but driving it.” – Dan Rather

“Have you ever had any anger about President Bush – who spent his time during the Vietnam War in the National Guard – running, in effect, a campaign that does its best to diminish your service in Vietnam? You have to be at least irritated by that, or have you been?” – Dan Rather

“Mikhail Gorbachev has, as many great leaders have, impressive eyes….There’s a kind of laser-beam stare, a forced quality. You get from Gorbachev that it does not come across as something peaceful within himself. It’s the look of a kind of human volcano, or he’d probably like to describe it as a human nuclear energy plant.” – Dan Rather

3 Life Lessons from Dan Rather

Now that you know all about Dan Rather’s net worth and how he achieved success; let’s take a look at some of the lessons we can learn from him:

The dream begins with a teacher who believes in you, who tugs and pushes and leads you to the next plateau, sometimes poking you with a sharp stick called ‘truth.’

If all difficulties were known at the outset of a long journey, most of us would never start at all.

Don’t taunt the alligator until after you’ve crossed the creek.

How much is Dan Rather worth?

Dan Rather’s net worth is estimated to be $70 Million.

How old is Dan Rather?

How tall is Dan Rather?

Dan Rather is an American journalist. Rather is the former anchor for the CBS Evening News from 1981 to 2005.

He grew up in Houston, Texas. He obtained his bachelor’s degree in journalism from Sam Houston State University in 1953. After school, he worked for the Houston Chronicle, did play-by-play announcing for the University of Houston football team.

What do you think about Dan Rather’s net worth? Leave a comment below.