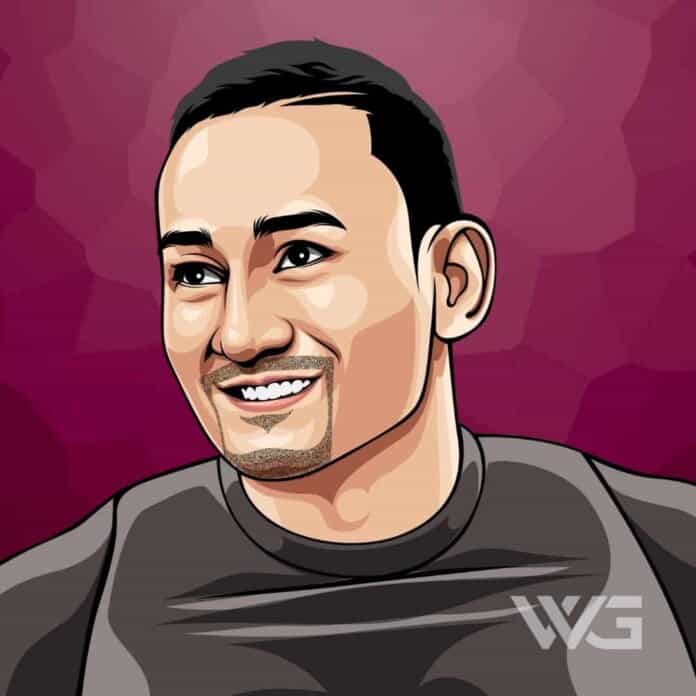 What is Max Holloway’s net worth?

Max Holloway is a Polynesian American mixed martial artist competing in the Featherweight division of the Ultimate Fighting Championship (UFC) where he is the current UFC Featherweight Champion.

As of November 2022, Max Holloway’s net worth is estimated to be roughly $2 Million.

Max Holloway was born on the 4th of December, 1991, in Honolulu. At the age of 19, Holloway had amassed a record of 4-0. He gained recognition as the #7 featherweight prospect of 2012 in Bloody Elbow’s 2012 World MMA Scouting Report.

His early career was highlighted by a split decision win over former Strikeforce and WEC veteran Harris Sarmiento on March 12, 2011, earning himself the lightweight strap for the Hawaii-based X-1 promotion.

Holloway was the youngest fighter on the UFC roster when he made his promotional debut as an injury replacement for Ricardo Lamas at UFC 143 in 2012, against Dustin Poirier.

Holloway faced Conor McGregor on August 17, 2013, at UFC Fight Night 26. He lost the fight via unanimous decision. He faced Anthony Pettis for the interim UFC Featherweight Championship on December 10, 2016, at UFC 206.

In 2018, it was announced that Holloway had to pull out of the fight with Edgar due to a leg injury. The same year he was announced as a late replacement for the injured Tony Ferguson in a fight for the vacant undisputed UFC Lightweight Championship at UFC 223 against Khabib Nurmagomedov to be held on April 7, 2018.

Holloway faced Dustin Poirier in a rematch for the Interim UFC Lightweight Championship on April 13, 2019, at UFC 236. He lost the fight via unanimous decision. This fight earned him the Fight of the Night award.

Here are some of the best highlights of Max Holloway’s career:

“I want to be a champion. And then, later on in my career, when I start getting good, then I can start doing the exhibition matches for money and stuff.” – Max Holloway

“People get some success, they get some money, they get some power, and they put themselves on this pedestal above other people. They forget people and try to fit in with the new crews they think they need to be around with. I didn’t believe that. I’m still a human being.” – Max Holloway

“Don’t be scared to look for help. Depression is real… It’s crazy, and all these guys, us athletes, that keep thinking we’re superheroes. I like to think I’m a superhero, but superheroes got to fight their demons, too, sometimes.” – Max Holloway

“I’m just asking for a fair shake. You see a lot of these guys, a lot of these other champions making what they’re making. I’m not trying to take anything away from them, but I feel like I’m one of the more exciting fighters under contract in the UFC.” – Max Holloway

Now that you know all about Max Holloway’s net worth, and how he achieved success; let’s take a look at some of the strongest lessons we can learn from him:

Each day, try to do something you’ve never done before. View life as an adventure.

2. Complaining Will Not Fix Things

3. You Must Teach Your Mind to Think Your Own Thoughts

So many things in this world die for your attention. Media, for example, use sensationalism to evoke a reaction from you.

How much is Max Holloway worth?

Max Holloway’s net worth is estimated to be $2 Million.

How old is Max Holloway?

How tall is Max Holloway?

Max Holloway is an American mixed martial artist who made his professional MMA debut in September 2010 with a win over Duke Saragosa. He is regarded to be one of the greatest MMA fighters in the world.

As of November 2022, Max Holloway’s net worth is approximately $2 Million.

What do you think about Max Holloway’s net worth? Leave a comment below.