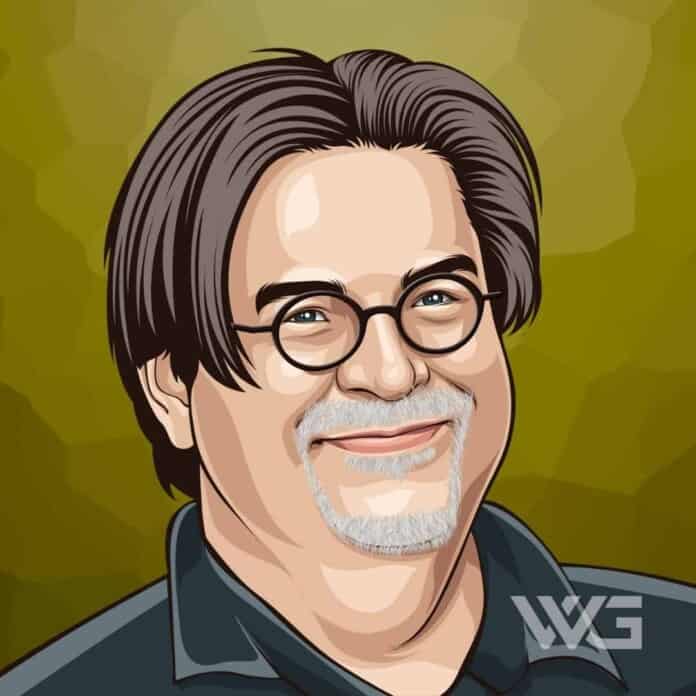 What is Matt Groening’s net worth?

As of February 2023, Matt Groening’s net worth is roughly $600 Million. The Simpsons franchise is estimated to be over $750 million.

Groening is the creator of the comic strip ‘Life in Hell’ and the famous television series ‘The Simpsons’, ‘Futurama’ and ‘Disenchantment’. The Simpsons is one of the longest-running TV-Shows in history.

Matthew Abraham Groening was born in Portland, Oregon on the 15th of February, 1954. Groening is the middle child of five children. His Norwegian-American mother was once a teacher and his German-Canadian father was a filmmaker and cartoonist.

Matt’s grandfather was a professor at Tabor College. His father Homer Philip Groening was born in Main Centre, Canada where he grew up in a Mennonite speaking family.

Matt Groening began his career in 1977 when he started doing a series of odd jobs in Los Angeles. During this time he began drawing cartoons for his self-published book titled ‘Life in Hell’ which was based on his struggles. Groening sold his first comic to magazine ‘Wet’ in 1978.

The same year, Groening got employed at a newspaper in Los Angeles. He was later able to officially publish ‘Life in Hell’ as his first comic strip.

The comic became a huge success, with over 20 000 copies being sold in its two printings. Following this success, his next work, ‘Work is Hell’, was also published, by Deborah Caplan.

James L Brooks expressed his interest to involve Groening in the creation of an animated series to run on the comedy series ‘The Tracy Ullman Show’.

Groening then created ‘The Simpsons’ which aired on the show for the first time in 1987. ‘The Simpsons’ gained enormous popularity and earned its exclusive half an hour spin-off series.

‘The Simpsons’ premiered in 1989, and the show quickly grew to became the longest running US primetime TV Series. In 1994, Groening started the comic book company ‘Bongo Comics.

The company released TV-series under its name, such as ‘The Simpsons’ and ‘Futurama’.Matt Groening has also made appearances in movies and documentaries including ‘Comic Book: The Movie’ (2004), ‘The Devil and Daniel Johnston’ (2005), ‘The Seventh Python’ (2008) and ‘I Know That Voice’ (2013).

In 2012, a 3-D short film based on ‘The Simpsons’ was released, and Groening was the executive producer and writer of this project. Matt Groening’s net worth is $600 Million.

Here are some of the best highlights of Matt Groening’s career:

“Where do babies come from? Don’t bother asking adults. They lie like pigs. However, diligent independent research and hours of playground consultation have yielded fruitful, if tentative, results. There are several theories. Near as we can figure out, it has something to do with acting ridiculous in the dark. We believe it is similar to dogs when they act peculiar and ride each other.” – Matt Groening

This is called “making love”. Careful study of popular song lyrics, advertising catch-lines, TV sitcoms, movies, and T-Shirt inscriptions offers us significant clues as to its nature. Apparently, it makes grown-ups insipid and insane. Some graffiti was once observed that said: “sex is good”. All available evidence, however, points to the contrary.”  – Matt Groening

“I plead alignment to the flakes of the untitled snakes of a merry cow and to the Republicrats for which they scam: one nacho, underpants with licorice and jugs of wine for owls.” – Matt Groening

“Living creatively is really important to maintain throughout your life. And living creatively doesn’t mean only artistic creativity, although that’s part of it. It means being yourself, not just complying with the wishes of other people.” – Matt Groening

“Lisa, I apologize to you, I was wrong, I take it all back. Always be yourself. If you want to be sad, honey, be sad. We’ll ride it out with you. And when you get finished feeling sad, we’ll still be there. From now on, let me do the smiling for both of us.” – Matt Groening

Now that you know all about Matt Groening’s net worth, and how he achieved success; let’s take a look at some of the lessons we can learn from him:

1. Even if you don’t think you’re a genius, other people might

Cartooning is for people who can’t quite draw and quite write. You combine the two half-talents and come up with a career. Even if you don’t think you’re a genius maybe other people might think you are.

Everyone doesn’t have to get every joke. People appreciate not being condescended to.

How much is Matt Groening worth?

Matt Groening’s net worth is estimated to be $600 Million.

How old is Matt Groening?

How tall is Matt Groening?

Matt Groening earned his impressive fortune by creating ‘The Simpsons’. Groening has also created ‘Futurama’ which aired for over 7 seasons.

Since then, Groening has become one of the highest-paid cartoonists in the world. The Simpsons franchise is estimated to be worth over $750 million dollars alone.

As of February 2023, Matt Groening’s net worth is estimated to be roughly $600 Million.

What do you think about Matt Groening’s net worth? Leave a comment below.

David Coulthard is a former British racing driver who has earned millions by winning some of the biggest races in Formula One.