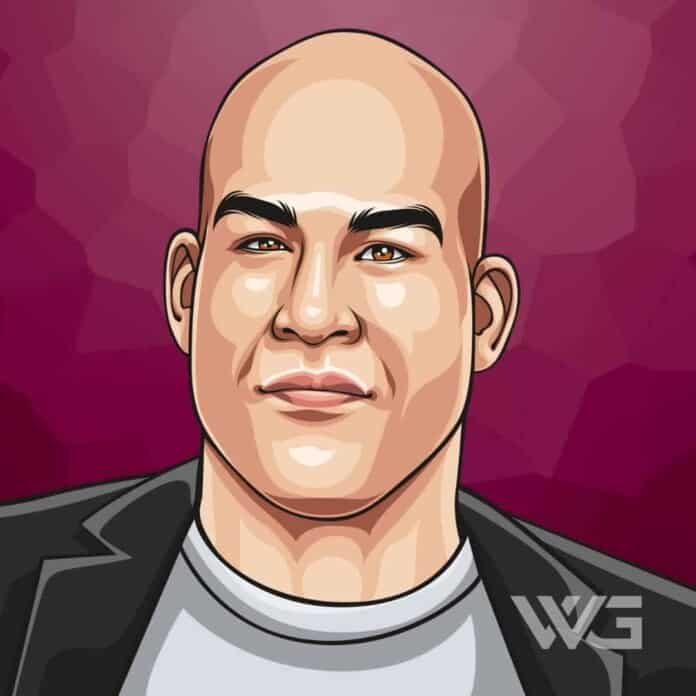 What is Tito Ortiz’s net worth?

Tito Ortiz is a former professional MMA fighter, who gained name and fame between the year 2000 and 2003. After every match, he wore a t-shirt in order to disrespect his opponent.

This action was carried out only when he won the match. The martial arts player trains himself with Team Punishment and fought in the Bellator MMA before retirement.

The Huntington Beach Bad Boy is the nickname that he owns to his credit.

In spite of having a successful fighting career, Ortiz is also the CEO of The Punishment Athletics MMA equipment and clothing line. Way back in his hometown, he is also the owner of the Punishment Training Centre gym.

As of February 2023, Tito Ortiz’s net worth is $20 million, and he is one of the richest MMA fighters in the world.

Tito Ortiz was born on the 23rd January, 1975, in Huntington Beach, California.

Tito’s birth name is Jacob Christopher Ortiz. As the young wrestler was born to his parents growing up became difficult as his parents started taking drugs.

His life as a child has been pathetic as his parents were on drugs and they finally got divorced when Jacob was in his teenage.

At that point of time, he almost gave up the hope of getting his dreams fulfilled.

At that point in his life, he was thrown out of his home by his mother and a coach advised him to finish his college and also work hard in order to fulfill his dreams.

Tito has been married twice and he is a father of three boys. As he has seen drug abuse as a teen, therefore, he inspires more teens and young people in America not to take the deadly addiction. He is a wrestler, actor and a businessman.

Along with all these, he balances his life and tries to be a super dad and bf at the same time so that his family stays happy. He is very much family oriented.

Various charity houses are also run by him as he has suffered himself as a child. He doesn’t want the same thing to be repeated in others life.

Ortiz started his wrestling career from his school days. He also held the fourth position in the state high school championship. When he was in college he had the opportunity to earn the title of California state junior college.

Therefore, his wrestling career began quite early. Tito started playing for UFC13. Martial Arts was his dream come true. He made a grand entry in this field by flighting against Wes Albritton. Tito fought the first match for no money.

In the very next match, he lost the game to guy Mezger. This was the turning point of his life. After these two matches, God was kind to him and he won three matches without any failure.  In one of the matches he again fought against Mezger and now it was his turn to win.

During this time, he became one of the highest paid wrestlers from his organization. His style of fighting is often recognized by the way he takes his opponent on the ground and then pounds him.

As he pounds, his opponent simply falls unconscious. Ortiz has never shown his surrendering skills while he is wrestling but it is quite evident from his Brazilian Jiu-Jitsu.

He fights with full heart and passion. Cheating is not in his personality while he is fighting. He plays tactfully and with power. His unusual muscles were solid enough to lower down his opponent’s confidence level.

Some of his remarkable moments include the loss of Ryan Bader at UFC 132, loss of Ken Shamrock at UFC 40, and the loss of Wanderlei Silva at UFC 25. Apart from that Ortiz along with his team showed their authoritativeness over ken shamrock and his team in TUF.

After gaining success in his wrestling career Ortiz has been seen on Celebrity Apprentice. It was a show conducted by Mr. Donald Trump. Such an appeared resembled two things.

“Prepare yourself for the worst, and the best will always happen.” – Tito Ortiz

“It’s always nice to look in the mirror at the end of the day and see that you helped somebody’s life… even if only a little bit.” – Tito Ortiz

“I just think God put me on this earth as a tool… showing people you can achieve stuff once you set you mind to things, that it can be accomplished.” – Tito Ortiz

View our larger collection of the best Tito Ortiz quotes!

How much is Tito Ortiz worth?

Tito Ortiz’s net worth is estimated to be $20 Million.

How old is Tito Ortiz?

How tall is Tito Ortiz?

Despite the fact that his parents got divorced and they were on drugs Ortiz had come a long way that was unexpected of him.

Since his early childhood, he was passionate about wrestling and took a keen interest in it. Since his school days, he started pursuing his favorite sport which was wrestling, and even after he went ahead to complete his graduation he had won the state-level championship.

He didn’t give up even after he was kicked out of his home by his own mother when he was eighteen. A coach of his advised him to complete his studies and also pursue wrestling as his career.

Having won several championships, he is now a successful actor, wrestler and, a businessman.

With Tito Ortiz’s net worth being $20 Million in 2021, he inspires young people, so that they do not lose their track in life.

He is an optimistic person, who has never given up on his life; and is now leading a happy family life with his girlfriend and three strong boys.

What do you think about Tito Ortiz’s net worth? Leave a comment below.