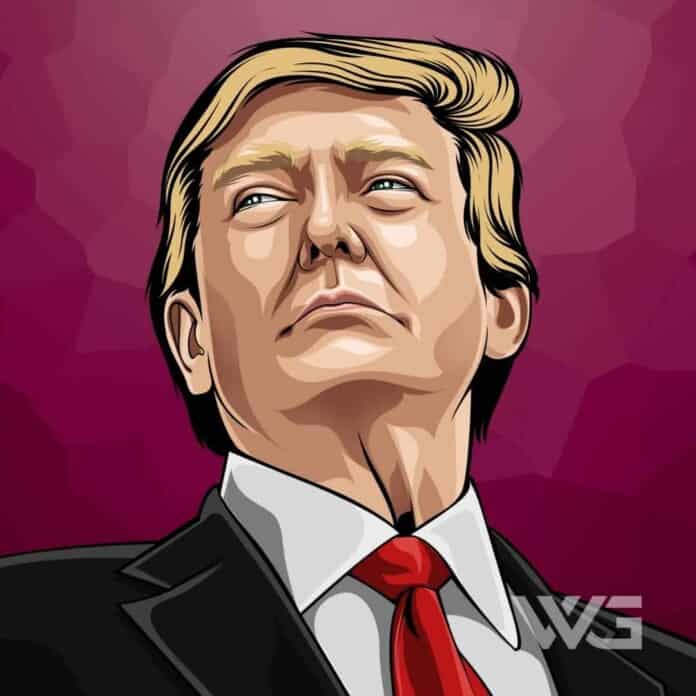 What is Donald Trump’s net worth?

As of February 2023, Donald Trump’s net worth is estimated to be $2 Billion, which is much lower than in previous years.

Donald Trump is the 45th president of the United States of America and a wildly successful businessman. Trump is now 71 years old and has built himself an incredible business empire.

It’s quite clear from looking at Donald Trump’s success story that he was always destined for greatness. He took over his father’s company and made it one of the largest conglomerates in the world.

Donald Trump was born on July 14th, 1946 in Queens, New York. Trump had 4 siblings, more than the average most of us have, and he attended school with them in Forest Hills at the Kew-Forest school.

The problem arose when he started having various difficulties at school…

His parents decided that it would be best to send him to the New York Military Academy at the age of 13; hopefully to straighten him out a little and help him direct his energy in more of a positive way.

Trump was very much into sports, playing a mixture of football, soccer and baseball. He eventually graduate in 1968 from the Wharton School of the University in Pennsylvania after previously being at Fordham University for two years.

Donald Trump’s career began at his father’s company ‘Elizabeth Trump and Son’, which was a company based in Brooklyn that focused on rental housing for the average Joe.

Whilst Trump was in college he undertook a project that involved refurbishing a property his dad had purchased. The property was an apartment complex in Cincinnati that after putting a $500,000 investment into the property, Trump was able to sell it for $6.75 million.

This was just over $1 million more than his dad had purchased it for back in 1962.

In 2016, Donald Trump made a transition from his normal real estate life to running for president of the United States of America, against Hilary Clinton.

Donald Trump won the election in November 2016 and became the 45th president of the United States of America. Many people were furious about the outcome of the election, with the phrase “Not My President” being spread around like wildfire.

Trump is now in his 4th year of serving as the country’s president, and things seem to have settled down. Many of his decisions have been questioned, but some of them have also received strong support.

As of February 2023, Donald Trump’s net worth is estimated to be $2 Billion.

What was ‘Elizabeth Trump and Son’, Donald Trump’s father’s company, was renamed to The Trump Organization in 1971 by Trump when he was given control of the company. This was only 3 years after he joined full time.

What started off as a company revolving around middle-class real estate, has now turned into a huge conglomerate, owning some of the best buildings in the world including The Trump World Tower, raking in hundreds of millions of profit.

Trump’s business advice is great and well worth taking into account since the man’s worth $3.1 billion! Here are 7 success lessons from Donald Trump:

1. Focus on the Present

Focus on making the present moment the best it can be, and you’ll never regret it. Forget about the past, and don’t think too far ahead into the future. Focus on the now.

If you’re going to be thinking anything, think big. Don’t limit yourself. You have the potential to build whatever you desire, so think big.

You have to do what you love, otherwise, you are wasting your time. Doing a job that you hate, purely because of income, leads to a lot of regrets. If you always do what you love, you’ll never be disappointed with your life.

Success is a struggle, and if you’re not struggling I’m shocked. So stay positive, believe in yourself and remember that anything is possible.

Just like doing what you love, having a passion for something gives you a huge edge simply because you’re enthusiastic to learn. This makes putting in the effort for success so much more bearable.

There’s nothing better than experience, even if it end in failure the first time. Every time you experience something you learn from it, you gain something from it every single time.

“Money was never a big motivation for me, except as a way to keep score. The real excitement is playing the game.” – Donald Trump

“If you’re interested in ‘balancing’ work and pleasure, stop trying to balance them. Instead make your work more pleasurable.” – Donald Trump

“I like thinking big. If you’re going to be thinking anything, you might as well think big.” – Donald Trump

“In the end, you’re measured not by how much you undertake but by what you finally accomplish.” – Donald Trump

View our larger collection of the best Donald Trump quotes!

How much is Donald Trump worth?

Donald Trump’s net worth is estimated to be $2 Billion.

How old is Donald Trump?

How tall is Donald Trump?

Donald Trump is, no doubt, a very successful entrepreneur.

However, in 2021 Donald Trump’s net worth is $2 Billion, and that makes his business advice very valuable.

What do you think about Donald Trump’s net worth? Leave a comment below.