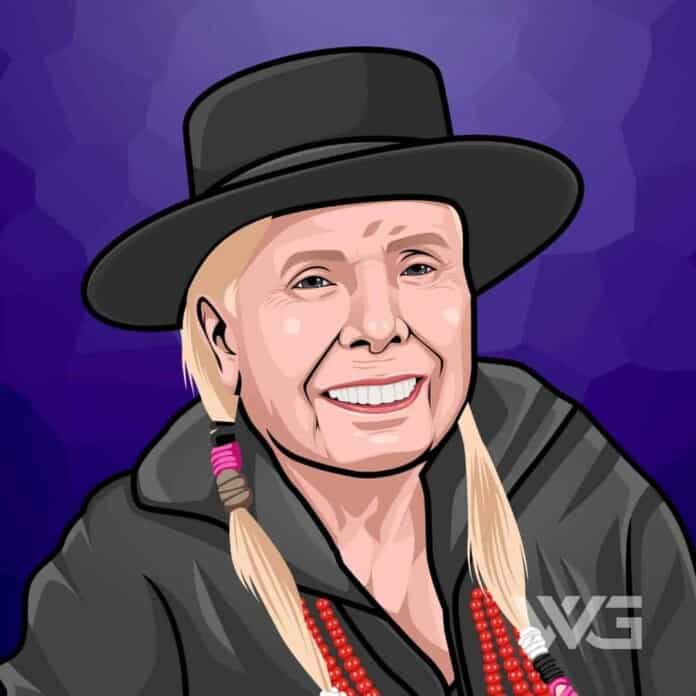 What is Joni Mitchell’s net worth?

Joni Mitchell is a Canadian singer and songwriter.

Mitchell’s songs often reflect on social and philosophical ideals and her feelings about romance, womanhood, and joy. She received several accolades, including nine Grammy Awards and induction into the Rock and Roll Hall of Fame in 1997. Rolling Stone called her “one of the greatest songwriters ever.”

As of December 2022, Joni Mitchell’s net worth is estimated to be roughly $100 Million.

Roberta Joan “Joni” Mitchell was born on the 7th of November, 1943, in Canada. Mithcell is the daughter of Myrtle Marguerite and William Andrew Anderson. Her mother’s ancestors were Scottish and Irish.

Her mother was a teacher, while her father was a Royal Canadian Air Force flight lieutenant who instructed new pilots at RCAF Station Fort Macleod. After the end of World War II, her father started working as a grocer her family moved to Saskatchewan.

When Mitchell was 20 years old, she decided to pursue a folk singing career. Once in Ontario, she took jobs performing folk music for small gatherings and clubs. In 1964, she became pregnant and gave the baby girl up for adoption.

Her next album, ‘Blue,’ was a commercial success, and it frequently appears on lists of greatest albums of all time. After the album’s release, she went on tour and produced two more critically acclaimed albums, ‘For the Roses’ and ‘Court and Spark.’

She reached a larger audience with her album ‘Turbulent Indigo,’ which was dropped in 1994. The album introduced Mitchell to a younger generation of artists.

In 1998, she released ‘Taming the Tiger,’ which would be her last release of new and original songs. Micthell dropped ‘Both Sides Now’ in 2000 and ‘Travelogue’ in 2003.

As of December 2022, Joni Mitchell’s net worth is estimated to be roughly $100 Million.

How Does Joni Mitchell Spend His Money?

Mitchell has been living in a massive home in Bel Air, California, for many years. If her house would hit the market, it would likely be $15 – $20 million.

Here are some of the best highlights of Joni Mitchell’s career:

“I thrive on change. That’s probably why my chord changes are weird, because chords depict emotions. They’ll be going along on one key, and I’ll drop off a cliff, and suddenly they will go into a whole other key signature. That will drive some people crazy, but that’s how my life is.” – Joni Mitchell

“I wrote ‘Big Yellow Taxi’ on my first trip to Hawaii. I took a taxi to the hotel, and when I woke up the next morning, I threw back the curtains and saw these beautiful green mountains in the distance. Then, I looked down, and there was a parking lot as far as the eye could see, and it broke my heart this blight on paradise. That’s when I sat down and wrote the song.” – Joni Mitchell

“You know that it never has been easy Whether you do or do not resign Whether you travel the breadth of the extremities Or stick to some straighter line.” – Joni Mitchell

“That’s one thing that’s always, like, been a difference between, like, the performing arts, and being a painter, you know. A painter does a painting, and he paints it, and that’s it, you know. He has the joy of creating it, it hangs on a wall, and somebody buys it, and maybe somebody buys it again, or maybe nobody buys it, and it sits up in a loft somewhere until he dies.” – Joni Mitchell

“You could write a song about some kind of emotional problem you are having, but it would not be a good song, in my eyes, until it went through a period of sensitivity to a moment of clarity. Without that moment of clarity to contribute to the song, it’s just complaining.” – Joni Mitchell

Now that you know all about Joni Mitchell’s net worth and how he achieved success; let’s take a look at some of the lessons we can learn from him:

1. Have a Nice Heart

2. A Moment of Clarity

You could write a song about some kind of emotional problem you are having, but it would not be a good song. Until it went through a period of sensitivity to a moment of clarity. Without that moment of clarity to contribute to the song, it’s just complaining.

Sorrow is so easy to express and yet so hard to tell.

How much is Joni Mitchell worth?

Joni Mitchell’s net worth is estimated to be $100 Million.

How old is Joni Mitchell?

How tall is Joni Mitchell?

Joni Micthell is a legendary singer and songwriter who is considered to be one of the best musicians and songwriters of all time. During her career, she has sold millions and millions of albums. Over the course of her long career, she has released 17 original albums, won nine Grammy Awards, and has been inducted into the Rock and Roll Hall of Fame.

Mitchell is considered to be one of the most influential and significant female musicians in the latter half of the twentieth century.

As of December 2022, Joni Micthell’s net worth is estimated to be roughly $100 Million.

What do you think about Joni Mitchell’s net worth? Leave a comment below.