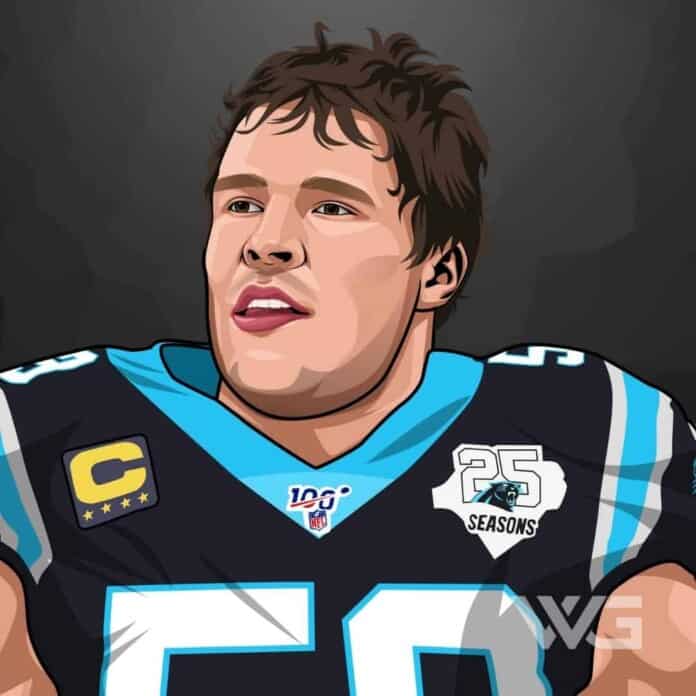 What is Luke Kuechly’s net worth?

Luke Kuechly is an American football linebacker for the Carolina Panthers of the NFL. Kuechly was drafted by the Panthers ninth overall in the 2012 NFL Draft.

He played college football at Boston College where he was recognized twice as a consensus All-American.

Luke August Kuechly was born on the 20th of April, 1991, in Cincinnati, Ohio.

He grew up in Evendale, Ohio. He attended St. Xavier High School in the Finneytown area of Cincinnati, where he played linebacker and safety for the football team.

He helped his team go 15-0, winning the Division 1 Ohio state title, and finishing at the top of several national polls as the best high school team in America.

In 2012, Kuechly announced his intention to forgo his final year of college eligibility and enter the 2012 NFL Draft.

At the time of his announcement, he was rated the top linebacker available in this draft: Mel Kiper ranked him tenth on his “Big Board”, while Todd McShay ranked him thirteenth in his “Top 32”.

He brought his play to a whole new level in his second year, becoming the leader of a stingy Panthers defense that finished the season as runner-up in points and yards allowed.

On Sunday, December 22, 2013, Kuechly recorded 24 tackles and 1 interception in a game against the New Orleans Saints.

In 2015, Kuechly signed a 5-year, $62 million extension with the Panthers, becoming the NFL’s highest-paid middle linebacker by annual average salary.

Here are some of the best highlights of Luke Kuechly’s career:

“Of course. It’s important to balance a total-body routine so you can stay balanced. If you push, you’ve got to pull. That’s how we approach it with the guys we work with—they’re going to set up a program that is a total body program that allows you to be explosive in certain spots and build strength.” – Luke Kuechly

“Nutrition and fluids play a big part in what you’re doing. You can work as hard as you want inside a facility, and your program can be great, but if you don’t balance it with a quality nutrient plan, you’re going to have some issues.” – Luke Kuechly

“My thing is, if you’re going to put stuff in your body, it’s going to be beneficial. Clean carbs, complex carbs, good proteins, a balanced diet. It’s difficult to do it on a consistent basis, but it’s pretty straightforward: fish, chicken, lean red meat, vegetables, fruits, complex carbs.” – Luke Kuechly

Now that you know all about Luke Kuechly’s net worth, and how he achieved success; let’s take a look at some of the lessons we can learn from him:

Hard work pays off if you stay true to yourself and dedicated.

No, don’t believe in hard work. If something is hard, leave it. Let it come to you. Let it happen.

Memories are fallible and a timer can save a lot of hard work from going out of the window.

How much is Luke Kuechly worth?

Luke Kuechly’s net worth is estimated to be $25 Million.

How old is Luke Kuechly?

How tall is Luke Kuechly?

Luke Kuechly is an American professional football player who has won the ACC Defensive Player of the Year, Bronko Nagurski Trophy, Butkus Award, Lombardi Award, and Lott Trophy in 2011 and was a two-time consensus All-American and three-time first-team All-ACC selection.

As of September 2022, Luke Kuechly’s net worth is roughly $25 Million.

What do you think about Luke Kuechly’s net worth? Leave a comment below.