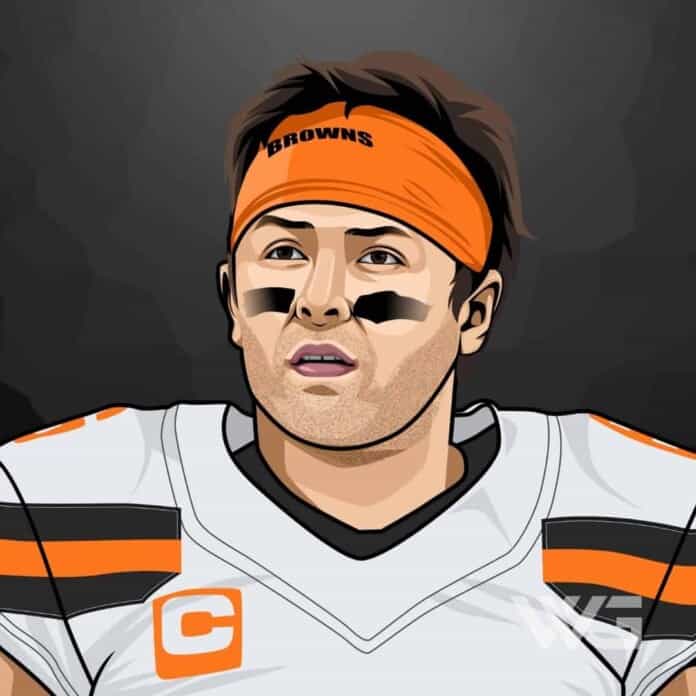 What is Baker Mayfield’s net worth?

Baker Mayfield is an American football quarterback for the Cleveland Browns of the NFL. Mayfield began his college football career as a walk-on player for the Texas Tech Red Raiders.

He is notable for being the first walk-on true freshman quarterback to start a season opener at a BCS school.

Baker Reagan Mayfield was born on the 14th of April, 1995, in Texas. Mayfield is the son of James and Gina Mayfield, the second of two sons.

Mayfield grew up as a fan of Oklahoma, and he attended a number of their games during his childhood. His father played football for three years for the University of Houston, though James never lettered.

The Cleveland Browns selected Mayfield with the first overall pick in the 2018 NFL Draft. Mayfield signed a four-year rookie contract with the Browns on July 24, 2018, with the deal worth $32.68 million in guaranteed salary.

Mayfield played in his first NFL game in Week 3 on Thursday Night Football against the New York Jets, replacing an injured Tyrod Taylor, with the Browns down 14–0.

While Mayfield was considered by many to be the favorite for Offensive Rookie of the Year during the 2018 season, the award was given to Giants running back Saquon Barkley.

On the annual Top 100 Players list for 2019, Mayfield’s peers named him the 50th best player in the league, one spot behind teammate Myles Garrett.

In Week 1 against the Tennessee Titans, Mayfield threw for 285 yards and a touchdown. However, he also threw three fourth-quarter interceptions, one of which was returned by Malcolm Butler for a pick-six as the Browns lost 13-43.

Here are some of the best highlights of Baker Mayfield’s career:

“I just think everybody just needs to be more disciplined. I think everybody knows what the problem is. We’ll see if it’s just a bad technique or just see what it is. Dumb penalties hurting ourselves and then penalties on my part. Just dumb stuff.” – Baker Mayfield

“You can focus on the few things that give people a negative image about me, or you can see the other things I’ve done, or talk to people in my inner circle who know more about who I really am.” – Baker Mayfield

“That’s the biggest difference from college to NFL. Everybody’s so talented at this level, the difference is knowing the game – knowing where to go with the ball in my position, knowing how to execute your job to the highest level. In college, you could just get by playing ball.” – Baker Mayfield

“TCU – they told me they were going to offer me a scholarship and kind of drug it out. I told other schools I wasn’t interested because I thought I was going to be there. They disappointed me and kind of hung me out to dry right before signing day.” – Baker Mayfield

Now that you know all about Baker Mayfield’s net worth, and how he achieved success; let’s take a look at some of the lessons we can learn from him:

Football is a violent, competitive game. That’s the way it was always meant to be played. You are supposed to play with an edge. You are actually supposed to impose your will on the other person to win.

2. Focus On The Right Things

You can focus on the few things that give people a negative image about you, or you can see the other things you’ve done, or talk to people in your inner circle who know more about who you really are.

Life is a bunch of ups and downs. It’s how you handle it.

How much is Baker Mayfield worth?

Baker Mayfield’s net worth is estimated to be $12 Million.

How old is Baker Mayfield?

How tall is Baker Mayfield?

Baker Mayfield is an American professional football player who has won multiple awards.

Mayfield has won the Heisman Trophy, the Maxwell Award, the Walter Camp Award, the Davey O’Brien Award, and the Associated Press Player of the Year award.

As of November 2022, Baker Mayfield’s net worth is estimated to be $12 Million.

What do you think about Baker Mayfield’s net worth? Leave a comment below.

Albert Haynesworth’s legendary performance on the football field is matched by his financial status as one of the highest earners in professional football.