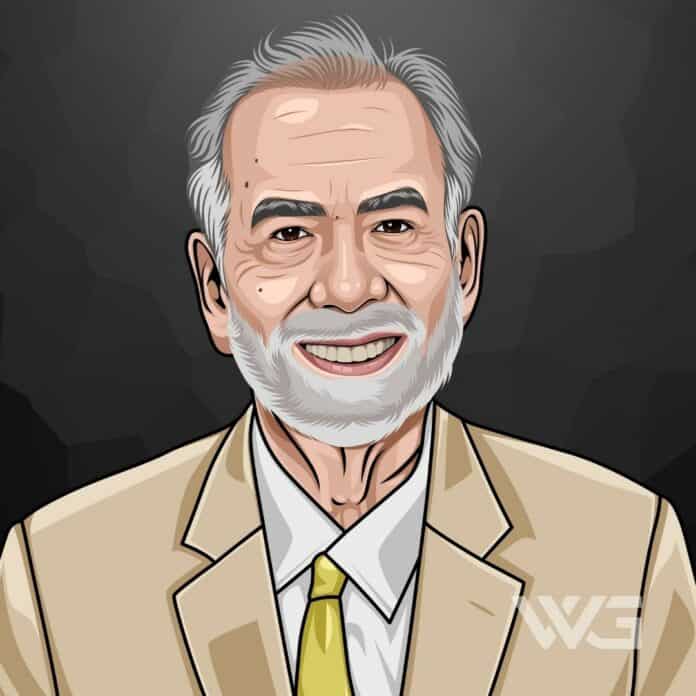 What is Francis Ford Coppola’s net worth?

Francis Ford Coppola is an American film director and film producer who has won multiple Academy Awards throughout his career.

Best known for the Godfather trilogy and Apocalypse Now, he’s also produced many movies that have picked up prestigious awards in the film industry.

As of December 2022, Francis Ford Coppola’s net worth is estimated to be $400 Million.

Raised in a family of Italian immigrants, his grandfather Francesco Pennino was a popular Italian composer, and he was raised with his brother August and sister, actress Talia Shire.

After graduating from Hofstra College in 1955, where Coppola founded the school’s cinema workshop, he enrolled in UCLA Film School.

Throughout the 1960s, Francis Ford Coppola worked on many low-budget movies, releasing his first feature-length film, Dementia 13, in 1963.

In the following decade, he’d secured a reputation as an impressive talent to watch and worked on scripts for major movies such as Patton, released in 1970.

In 1972, Coppola released the epic movie The Godfather, working with some of the richest actors in the world, including Al Pacino and Marlon Brando.

For the sequel, Robert De Niro joined the cast, with the film proving to be a huge success at the box office and widely regarded as one of the greatest movies of all time.

He followed this up with the classic war movie Apocalypse Now before moving on to a string of lesser-known movies during the 1980s.

During this period, he worked with Tom Cruise on the film The Outsiders and with Jim Carrey and his nephew, Nicolas Cage, on Peggy Sue Got Married.

In 2022, he announced the revival of his project Megalopolis, which had been in development hell for many years.

The cast line-up for Megalopolis includes Adam Driver, Shia LaBeouf, and Forest Whitaker, revolving around the aftermath of the destruction of New York City.

Francis Ford Coppola’s career earnings saw a significant increase over the course of his career, picking up steam following the international success of The Godfather movie trilogy.

He has gone from earning $10 a week in the 1960s to taking home seven-digit salaries for his later movies, with other business ventures further increasing his earning capacity.

The huge success of his many movies and other business ventures, combined with upcoming projects, ensures Coppola’s career earnings will remain high.

As one of the richest directors in the world, Francis Ford Coppola’s net worth has grown exponentially as his status in the film industry has increased.

Despite several movie flops in the 1980s and 1990s, he has consistently commanded high fees that have allowed his net worth to grow.

Ongoing royalties from the Godfather trilogy and Apocalypse Now, along with his winery and other movie production credits, means his net worth will likely continue to increase.

Francis Ford Coppola married writer and documentary filmmaker Eleanor Jessie Neil in 1963, who would co-direct the documentary Hearts of Darkness: A Filmmaker’s Apocalypse.

His daughter, Sophia Coppola, has worked with some of the richest actresses in the world, including Scarlett Johansson, on the film Lost in Translation.

Coppola established the Zoetrope company to help further the cause for screenwriters, where he hosts workshops for filmmakers and writers.

Over the course of his illustrious career, Francis Ford Coppola has been the recipient of multiple awards, accolades, and movie industry honors.

He has won awards in various capacities, from his work as a director and screenwriter to productions for other directors and in stage productions.

Here are some highlights of the awards and accolades from Francis Ford Coppola’s career:

Coppola’s career continues to see the iconic director work on many high-profile projects, with more awards and achievements likely to come in the future.

How Does Francis Ford Coppola Spend His Money?

Francis Ford Coppola has resided in Los Angeles throughout his career and once owned the Grand Tudor home in Hancock Park, also owned by Ariana Grande in recent years.

He has invested money in his Vista Hills winery, competing with some of the most expensive wines in the world and spanning hundreds of acres of land.

A keen watch collector, he’s worked with F. P. Journe to develop an exclusive watch for Only Watch, the FFC Blue.

From his early years as an aspiring writer to international fame and recognition following the success of The Godfather, Francis Ford Coppola has enjoyed an exemplary career.

With many high points and successes under his belt, he’s reshaped movie production and worked on major international projects.

Here are some of the best highlights of Francis Ford Coppola’s career:

With the promise of his long-anticipated movie Megalopolis and other projects still to come, Coppola’s career highlights will continue to grow.

Francis Ford Coppola has shared many insights into the nature of filmmaking and the creative process.

These insights shed light on the nature of ambition and how your personal experiences can inform creative decisions.

Here are our favorite quotes from Francis Ford Coppola:

Now that you know all about Francis Ford Coppola’s net worth, we’ll dig into some of the amazing lessons we can learn from his life and career.

A prolific movie director, Coppola has worked with many outstanding artists to create some of the best-loved films ever made.

Here are some of the best success lessons to learn from Francis Ford Coppola:

1. Recovery From Illness Can Be An Opportunity For Intellectual Growth

Coppola suffered from illnesses that often left him confined to his bed as a child, but he didn’t let this time go to waste.

Instead, he read up on plays and literature, which he later incorporated into his creative process.

Coppola’s fortunes have continued to increase, so he’s wisely reinvested his money in a wide range of successful business ventures.

If you have capital at your disposal, use it to develop new projects to further increase your wealth.

3. Don’t Let Failures Deter You From Putting In The Effort

Before he found success with his screenplay for Patton, Coppola worked for an extremely low wage while finding his feet in the industry.

Success rarely comes overnight, so be prepared to live on a budget while you learn your craft.

That concludes this complete guide to the film industry career of writer, producer, and director Francis Ford Coppola, and how he achieved his vast net worth.

A prolific creator working on many projects over the years, he continues to develop new movies and produce films for other talented directors.

With his career continuing to thrive, his net worth will change, so be sure to check back on this article in the future for the most up-to-date information.

As of December 2022, Francis Ford Coppola’s net worth is estimated to be $400 Million.

What do you think about Francis Ford Coppola’s net worth? Leave a comment below.