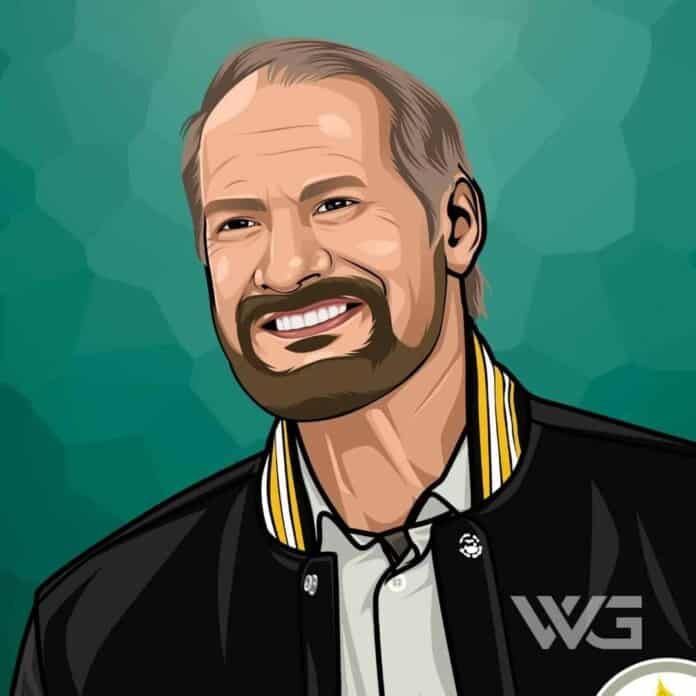 What is Bill Cowher’s net worth?

He served as a head coach in the NFL for 15 seasons with the Pittsburgh Steelers. Cowher began his coaching career as an assistant under Marty Schottenheimer for the Cleveland Browns and Kansas City Chiefs, serving as the latter’s defensive coordinator from 1989 to 1991.

William Laird Cowher was born on the 8th of May, 1957, in Pennsylvania.

Cowher excelled in football, basketball, and track during his school years. In 1979, he graduated with a bachelor’s degree in education.

Cowher began his NFL career as a linebacker with the Philadelphia Eagles in 1979 but signed with the Cleveland Browns the following year. Cowher played three seasons in Cleveland, making him a member of the Kardiac Kids.

Cowher’s time in Philadelphia included tackling a young Jeff Fisher when playing against the Chicago Bears, causing Fisher to break his leg.

Cowher primarily played special teams during his playing career and carried that experience into his coaching career, emphasizing special teams.

In 1985, he began his coaching career. He became the 15th head coach in Steelers history when he succeeded Chuck Noll in 1992, but only the second head coach since the NFL merger in 1970.

During the 2005 season, the Steelers had the best record of any team in the NFL. The following year, Pittsburgh Steelers won Super Bowl XL, defeating the Seattle Seahawks 21–10 and giving Cowher his first Super Bowl ring.

Here are some of the best highlights of Bill Cowher’s career:

“Nothing drives me more than to, hopefully, be able to hand Steelers chairman Dan Rooney that fifth Vince Lombardi trophy. If I can do that, then I would think, that when he brought me here, I finally accomplished what he wanted me to do.” – Bill Cowher

“So many times through the course of a season, you are defined by your backups. They have three players in Kirk Cousins, Niles Paul and Bashaud Breeland who may be better than the players that they’re replacing.” – Bill Cowher

“Yeah, I know he discovered the West Indies; it wasn’t America. But the whole thing with Columbus was that people had been telling him, ‘Don’t go. The world’s flat.’ But he kept going. He found land.” – Bill Cowher

“This isn’t Kirk Cousins’ job to win. Right now this is Kirk Cousins’ job to lose…He’s putting together a profile right now, a resume of these next seven weeks that will make the decision easy for the Redskins: either they sign him to a contract or they’re still looking for the quarterback of the future.” – Bill Cowher

“I’m their biggest fan every Sunday they go out there and play. I’m pulling for them, for the people in New Orleans and everything they’re going through. If there are three or four hours that people can get away from the reality that is existing for them right now, the uncertainty.” – Bill Cowher

“It’s the only call…To have Christian Ponder as your third quarterback, a guy who started for you a year, to me it made it an easy call because you have a veteran guy who has played in this atmosphere before.” – Bill Cowher

Now that you know all about Bill Cowher’s net worth and how he achieved success; let’s take a look at some of the lessons we can learn from him:

As a quarterback, you have to have a short memory. Don’t lose your confidence, and stay within yourself. Don’t try to do too much.

The one thing you don’t want to do is get to a point where losing becomes a habit.

We’re trying to give a young man life lessons – sacrifice, commitment, teamwork, self-confidence, self-esteem. That’s what this sport does for kids.

How much is Bill Cowher worth?

Bill Cowher’s net worth is estimated to be $18 Million.

How old is Bill Cowher?

How tall is Bill Cowher?

Bill Cowher is an American professional football coach and former player. Cowher was born in Crafton, Pennsylvania. He is best known as the head coach of the Pittsburgh Steelers.

He started his NFL career as a linebacker with the Philadelphia Eagles in 1979 but signed with the Cleveland Browns the following year, where he played three seasons.

What do you think about Bill Cowher’s net worth? Leave a comment below.