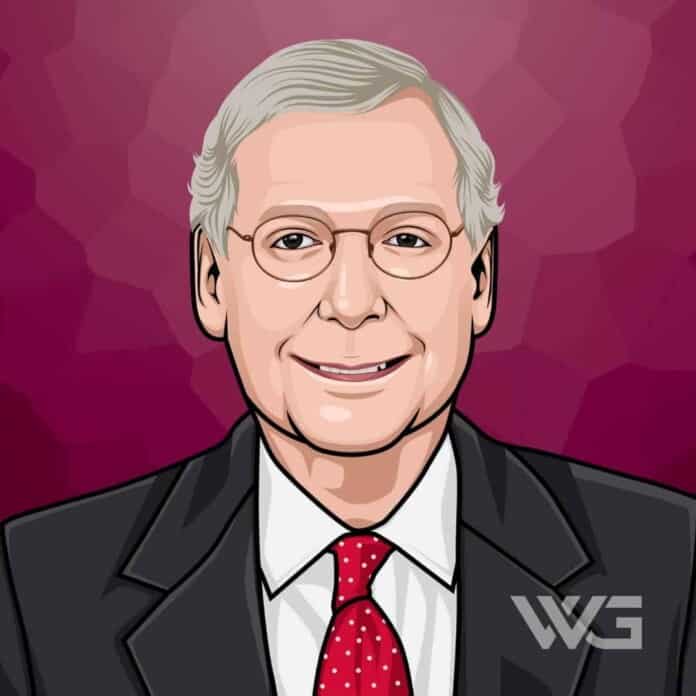 What is Mitch McConnell’s net worth?

Mitch McConnell is an American politician, who currently serves as the Senate Minority Leader in the U.S. Congress.

McConnell is a member of the Republican Party, and he has served since 1985. He has also served as Senate Majority Leader from 2015 to 2021. He was first elected to the U.S Senate in 1984 and is the second Kentuckian to serve as a party leader in the Senate.

As of January 2023, Mitch McConnell’s net worth is estimated to be roughly $35 Million.

Addison Mitchell McConnell Jr. was born on the 20th of February, 1942, in Alabama. He grew up in nearby Athens, Alabama. He is of Scots-Irish and English descent. One of his ancestors fought on the American side in the American Revolutionary War.

In 1944, when he was a young boy just over 2 years of age, McConnell’s upper left leg was paralyzed from a polio attack. He received treatment at the hospital. The treatment saved him from being disabled for the rest of his life. In 1977, McConnell earned his first elected seat as judge-executive of Kentucky’s Jefferson County.

The very beginnings of Mitch McConnell’s career can be traced back to the late 1960s, when he enlisted in the U.S. Army Reserves, which allowed him to avoid being sent into combat during the Vietnam War. His military stint was very short-lived, though. After five weeks of training, he was diagnosed with optic neuritis and honorably discharged not long after that. Since then, McConnell dedicated his life entirely to politics.

Prior to his brief period in the U.S. Army, McConnell interned for Senator John Sherman and was later the assistant to Senator Marlow Cook. He won the Kentucky U.S. Senate seat in 1984 by a thin margin, representing the Republican party.

He was later re-elected in 1990, 1996, 2002, 2998, and 2014. For many years under Barack Obama, McConnell was the Minority Leader of the Senate. When the Senate flipped, he became the Majority Leader. Now, he is once again the Minority Leader, as of January 20, 2021. He is the longest-serving United States Senator in the history of Kentucky.

Under President Obama, McConnell served as Minority Leader, and he was vehemently opposed to the vast majority of that administration’s proposals, even going as far as saying that one of the main goals of the Republican senators is to ensure that Obama would be a one-term president. Unfortunately for McConnell, he failed to achieve that goal, as the Democratic president was elected for his second term in 2012.

During the Trump administration, he passionately defended the president’s right to appoint federal judges in an unobstructed manner, during the controversial appointment of Bret Kavanaugh to the Supreme Court. However, after the Capitol Hill incident on January 6, 2021, he became one of the most outspoken critics of Trump’s bogus claims about the 2020 election being stolen by the Democrats.

McConnell was married to Sherrill Redmon from 1968 to 1980. They have three children together. He later married Elaine Chao in 1993. Elaine served as Secretary of Labor under George W. Bush.

Elaine’s father is a successful Chinese-American shipping magnate. He founded the Foremost Group. The company operates a fleet of 33 ships. Foremost is worth an estimated $1.2 billion before debt. After debt and investments from China’s Export-Import Bank and Taiwan’s First Commercial Bank.

In 2007, McConnell’s net worth was $3 million. In 2007, after receiving an inheritance, estimated at $5 -25 million, following the death of the mother of McConnell’s wife, Mitch and Elaine’s personal net worth jumped to $12.7 million. Of course, seeing as McConnell’s net worth is much higher than that, the sources of the rest of his money remain inaccessible to the public. According to the Washington Post, the Senate Minority Leader’s personal wealth is so large due to a number of government ‘backroom deals’ he allegedly facilitated during his lengthy tenure as a senator. He earns significant income as a politician, but not nearly enough to justify almost a sevenfold increase in his estimated net worth.

As of January 2023, Mitch McConnell net worth is estimated to be roughly $35 Million.

Here are some of the best highlights of Mitch McConnell’s career:

“What we do know is that the American people, regardless of how they feel about the abortion issue, don’t think that taxpayer money ought to be used to pay for abortions.” – Mitch McConnell

“Are we still a country that takes risks, that innovates, that believes anything is possible? Or are we a country that is resigned to whatever liberty the government decides to dish out?” – Mitch McConnell

“The White House has a choice: They can change course, or they can double down on a vision of government that the American people have roundly rejected.” – Mitch McConnell

“We hear the stories every day now: the father who puts on a suit every morning and leaves the house, so his daughter doesn’t know he lost his job, the recent college grad facing up to the painful reality that the only door that’s open to her after four years of study and a pile of debt is her parents’. These are the faces of the Obama economy.” – Mitch McConnell

“The president feels not only do we need to change these rogue regimes, but even our friendly allies, who really basically have, sort of, benign dictatorships, need to get with the program if they want to have long-term security and prosperity from terrorism.” – Mitch McConnell

“The bill that job creators and out-of-work Americans need us to pass is the one that ensures taxes won’t go up – one that says Americans and small-business owners won’t get hit with more bad news at the end of the year.” – Mitch McConnell

Now that you know all about Mitch McConnell’s net worth and how he achieved success; let’s take a look at some of the lessons we can learn from him:

No matter how unusual a personality that gets elected to office, there are constraints in this country. You don’t get to do anything you want to. McConnell’s political career embodies this statement very well. Despite being branded as a “conservative orthodox,” by some of his biographers, the Senate Minority Leader understands the importance of keeping fiery personalities in check. Most recently, it was evidenced by Mcconnell-led Republican Party’s turn away from the combative approach promoted by former president Donald Trump during the 2022 midterm elections.

Only one thing can save America, and that’s to get a handle on the deficit and debt issues. As a Republican leader, McConnell voted in line with the best (in his opinion) interests of the American economy, and he has stated time and time again that America’s prosperity is dependent on a free-market, unrestrained economy. His hardline stance on debt and deficit issues was perhaps most evident during the Obama administration when McConnell’s use of the filibuster to stop democratic initiatives was dubbed by some analysts as a “constitutional hardball.” According to some, his actions during that time were not in line with the principles of American democracy.

Democrats not only have the White House; they have the Senate too. People have to be realistic about what they can and cannot achieve, while at the same recognizing that realism should never be confused with capitulation. Mitch McConnell’s whole career was built around strategically mapping out his moves to the benefit of himself and his party. Although he’s involved in a number of bipartisan legislation efforts, he has been known for vehemently opposing Democratic initiatives that would not bode well for the Republican bottom line.

How much is Mitch McConnell worth?

Mitch McConnell’s net worth is estimated to be $35 Million.

How old is Mitch McConnell?

How tall is Mitch McConnell?

Mitch McConnell is an American politician who has served as Senate Minority Leader from 2007-2011 and then-Majority leader beginning in 2015. He returned to the role of Senate Minority Leader in January 2021. McConnell was born in Sheffield, Alabama, in 1942. He graduated with honors with a degree in political science from the University of Louisville.

He was the president of the Student Council of the College of Arts and Sciences. In 1967 he graduated from the Kentucky College of Law.

As of January 2023, Mitch McConnell’s net worth is estimated to be roughly $35 Million, making him one of the wealthiest members of the U.S. Congress.

What do you think about Mitch McConnell’s net worth? Leave a comment below.