Cardone is know most for hosting his show ‘Power Players’, where he interviews successful entrepreneurs and individuals. You can also find some excellent interviews on the show, and there’s definitely a lot of lessons to be learnt.

There’s a lot to be learned about success from Cardone, make no mistake about that. So I decided to write this article that showcases some of the incredible, game changing insights from Grant Cardone, to help you elevate your life to the next level.

It doesn’t matter whether you’re an entrepreneur, athlete, whatever… these are some powerful life lessons anybody can use to improve their life.

1. What You Take Responsibility For, You Can Change

In his book The 10X Rule, he strongly puts an emphasis on this very point right here. The most successful people are those who take on the most responsibility and that can be a scary thing but it doesn’t have to be. Let me elaborate…

You can either view responsibility as a bad thing and never grow or you can see it as a way in which you can grow even further and as a result your will.

Which belief is more empowering?

The latter, because as you take on more, you will be forced to step up and do things you’ve never done as well as perform like you never have.

Don’t settle. Too many people reduce their target when the action they’re taking isn’t enough. The problem is not the target.

Don’t fix that, instead fix the level of action you’re taking. If you’re wondering whether you’re taking enough action then you need only look at one thing to answer that question.

Do you have what you desire? If the answer is no, then that is as clear a sign as any that you need to take more action.

To the degree that you care what other people think about you, you are looking to others for your self-worth.

There is no one who hasn’t looked like an idiot at some point in their lives. Does that mean that they’re an idiot? Of course not, it just means that they tried something they’ve never done before and the result was proportionate to their skill.

Another point that made me read twice was when he said that the people who think you are an idiot aren’t important to you anyways.

This just ties back to an overarching problem that we have as a society in which we try to impress those who don’t even like us so that we can have their approval.

This simple phrase here has the power to complete change your perspective. I know it changed mine. He argues that massive action is natures default and it makes sense.

Take a look at little kids, they can be all over the place!

It’s not until a parent tells their children to sit still or calm down that they stop jumping and running around.

If that’s not enough evidence take a look at the ground and under your feet and look at the ants just in an urgent movement to move and build or look at bees flying through the air collecting pollen to take back to their hive.

And if that’s not proof enough, then take note of the movement going on just underneath your feet. At this very moment, no matter where you are, there is constant movement of tectonic plates going on.

It is only when we are put into an environment that is comfortable and require no action that we become lazy and take no action.

You can’t ever think average, because if you start thinking average, then that’s what you’re going to get for yourself. An average life.

Something tells me that’s not what you want…

You want to be successful. You want a great life. So you have to think big, not average! 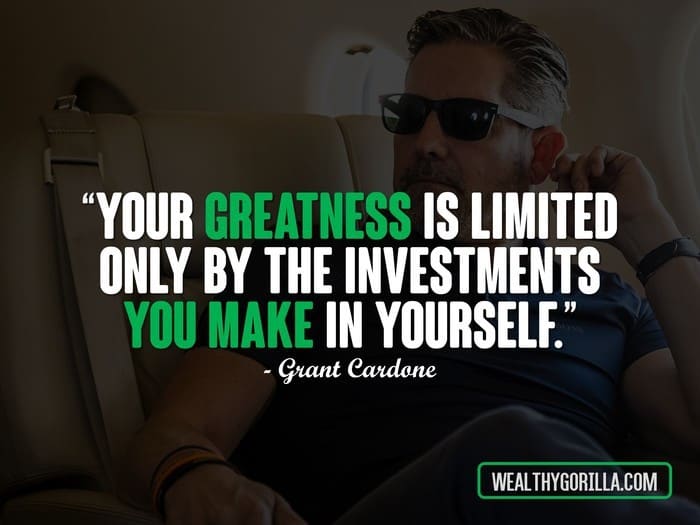 6. Tie Your Goals to a Bigger Purpose or Else it Won’t Stick

Think of celebrities who have gained so much fame and money that they end up going crazy and off center. There’s no higher purpose to ground them and prevent them from being scattered and easily affected by material wealth.

Find a strong enough reason that will root you to the ground when the winds of life are blowing your way.

7. Success Must Be Your Duty

Grant Cardone sees success as an obligation and not a choice. When you have decided that your success is a must, then you can truly succeed and take massive action.

It is only when you views success as a “should’ve” or a “would’ve” that you shoot yourself in the foot by not going all in and committing to achieving the success you desire.

A quick recap on the 7 game changing insights from Grant Cardone:

Which is your favorite success lesson from Grant Cardone? Leave a comment below.

4 Reasons Why Your Image Relates to Your Success

Gilberto Rosas is a thinker by nature and a doer by discipline. He is also a visionary with a hunger for growth and an addiction to self actualization, which he shares on his blog MaverickUpgrade.com.