Whenever I was travelling, I would drink a lot of alcohol. Although there were a lot of great nights involved, it wasn’t healthy, and I soon noticed that I could have just the same amount of fun without it.

Also, travelling on a budget and being a big fan of alcohol doesn’t really bode well for your bank balance.

If you’re someone who loves alcohol, and even might go as far to say you’re addicted to it, this article might help.

Below is a list of all the detailed reasons as to why your life would be much better without alcohol. And if you stick around until the end of the article, there’s also some advice as to how you can begin to cut down your consumption.

Here are 13 reasons to stop drinking alcohol for good:

1. Your Damaged Liver Will Begin to Heal

The regular consumption of alcohol can cause your liver cells to die. Eventually, enough cells can die to cause permanent damage, like scars that never heal.

Although, if you stop drinking, your liver can quickly repair itself to a certain extent. Just like any other small cut on your body would do.

Healing can normally begin within a few days after you stop drinking, and for more severe cases it could take up to several months.

Depending on where you live, alcohol can be incredibly expensive. If you live in a country like Vietnam, you can literally buy a beer for $0.40. But in western countries, you will be spending a lot of money if you love to drink.

Stop drinking, and you’ll immediately start to see an increase in your savings like never before. Why don’t you workout how much money you’d spend on alcohol in a typical week; then every week put however much you don’t spend on alcohol of that into a jar or a separate account.

That way, you’ll really see how much money you’re saving after reducing your consumption.

3. Your Sex Life Will Improve

When you give up alcohol, the quality of your sleep improves drastically. Which in turn, increase your testosterone production. T-levels are linked to sex drive, and the higher they are, the better your sex drive will be.

Plus we all know that alcohol can cause impotence, Ie. Ruining your ability to perform.

4. Your Skin Will Clean Up

Because of all the toxins contained within alcohol, drinking it regularly will cause breakouts of acne, and signs of premature ageing. In other words, drinking alcohol excessively will lower the appearance of your skin.

Luckily, this is easily cured within a short period of time, but you have to stop drinking the stuff!

Do you really want to sacrifice your health for a quick buzz?

On average, a pint of lager contains 180 calories. Those calories are empty calories. They contain no benefit to you whatsoever. Since the average daily calorie intake for men is 2640, several pints of beer can make a big impact.

If you quit drinking beer, or alcohol entirely, it’ll make a huge difference to your health. You’ll be much more likely to lose weight when you’re not consuming these empty calories.

6. You’ll No Longer Be Reliant on Something Else

Being reliant on another substance is not healthy in any aspect. If you’re someone who needs alcohol to get through your day, then you need to fix that.

Once you stop drinking alcohol, you’ll feel much happier, and your mood won’t depreciate if for some reason you’re unable to have a drink one day.

This is the same for any addiction, regardless of whether it’s with alcohol, drugs, video games, or anything else.

For some, the worst part of drinking alcohol always seems to be waking up with an enormous hangover. Quite frankly, there comes a point in time where you have to ask yourself if it’s really worth it.

Whenever you get drunk, you know that the next day is pretty much going to be ruined. You won’t want to do anything. Your productivity will be shot to bits.

So why not stop drinking alcohol and completely eliminate hangovers from your life?

How often are you spending time in the pub, getting drunk, talking about unproductive and unimportant things, when you could be using that time more productively.

In fact, if you’re at the point where you’re regularly going on your own to have a drink, then that is just completely wasted time, because you’re not even socializing with anyone else.

9. You’ll Be Reducing Your Risk of Disease

If you quit drinking before you manage to do permanent damage to your body, it will heal itself. However, if you push it past it limits, you’ll do lasting damage, and end up with serious illnesses.

Needless to say, if you want to reduce the risk of disease, quitting alcohol should be your number #1 priority.

Interestingly, a lot of people use alcohol to help them get to sleep. You’ve probably heard your friends say that whenever they drink alcohol it ends up sending them to sleep, right?

Actually, it’s the opposite. Alcohol reduces both the quantity and quality of sleep.

A lot of people probably don’t realize that fact. And you don’t need to drink a lot to see these results. Even light, or moderate drinkers will see a massive improvement in the quality of their sleep if they stop drinking alcohol altogether.

11. Your Natural Confidence Will Begin to Grow

The amount of people who use alcohol to help them have higher levels of confidence is social situations, is staggering. You know who I’m talking about. The guys who drink alcohol purely to try and pluck up the courage to talk to girls on nights out.

It’s never a good thing. You come off like a douche.

Once you stop drinking alcohol altogether, you’ll start to gain that confidence naturally, and not just through getting intoxicated.

12. You’ll Become Healthier in Other Areas of Life

Once you start to see the results from giving up alcohol, you’ll probably be motivated enough to make changes in other areas of your life.

You’ll also be feeling happier and healthier, which can easily improve relationships, your career, etc.

You’ll definitely feel a lot better when doing your workout at the gym, that’s for sure.

How many stupid decisions have you made while under the influence of alcohol? How many of them do you remember?

What if you stopped drinking alcohol?

Would you thank yourself for not making an enormously large number of those decisions on a regular basis?

The reality is that if you stop getting drunk, you’ll stop making stupid decisions, and that really can’t be a bad thing.

How to Stop Drinking Alcohol 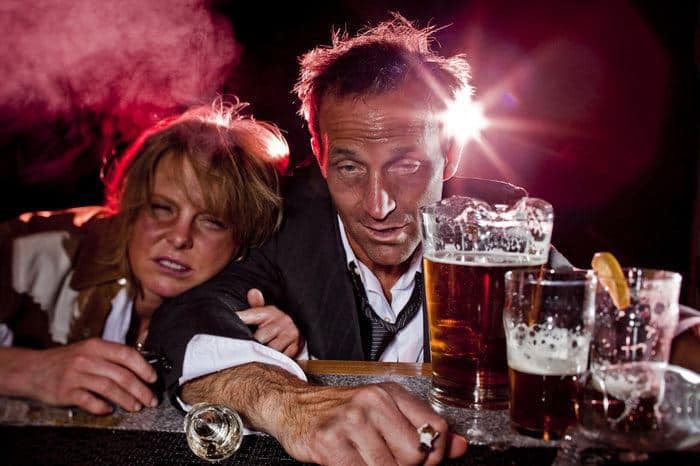 Now that you know just how many reasons there are to stop drinking alcohol, we can look at how you can give it up cold turkey!

Here’s some simple steps you can take:

I spoke to a friend of mine earlier on this year, who managed to give up alcohol and lose 50lbs! He said that he would try and re-write his day, so that he wouldn’t find himself in situations near alcohol.

For example, if his drive to work involved passing multiple liquor stores, he’d simply drive a different route to work. Doing small things like this, so that you don’t come into contact with alcohol as much throughout your day, can make a huge difference.

Whenever you state a goal to others, it becomes real. Not only that, but once you let all your friends and family, they won’t accidentally surround you with alcohol. They’ll be able to help you, rather than enabling you.

Rewarding yourself for “x amount of days” without alcohol is another great way to stay on track. Similarly to the way in that bodybuilders reward themselves for eating clean for long periods of time.

You’ve got to have a cheat day once in a while, otherwise you’ll end up falling off the wagon, and you’ll fall hard.

Once you see a benefits of a life without alcohol, you’ll be addicted to them. And that’s a very good thing, because it stops you from wanting to start drinking again.

Being addicted to the benefits of not drinking alcohol, means your interest in drinking it again is absolutely ZERO.

Are there any withdrawal symptoms from quitting alcohol?

The only downside to quitting alcohol cold turkey is that there can be a number of withdrawal symptoms, depending on whether you were previously a big drinker or not.

You don’t have to completely give up alcohol to be healthy. Having a pint now and again isn’t going to make a huge difference to your overall health.

However, if you’re an excessive drinker, hopefully these reasons we’ve discussed within the article will tempt you to cut down on your consumption.

Here’s a quick recap on the list of benefits of not drinking alcohol:

Got any other reasons as to why people should stop drinking alcohol for good? Share them in the comments section.

French professional basketball player Even Fournier has earned millions during his two-decade career with the NBA.