Habits are the key to succeeding in life;

Regardless of whether it involves adopting the good ones, or kicking the bad ones. Success will revolve around your habits, so thinking carefully before adopting any new ones that may cause issues when trying to pursue you dreams and desires.

Since becoming successful involves doing small and sometimes fairly average things over and over again until you perfect them, a habit is what’s going to keep you on track and ensure that you continuously improve day by day at your selected skills.

Bad habits can easily kill people’s dreams and desires, because their destructive and not constructive traits. And making destructive traits a habit won’t get you off the ground, they’ll make sure you stay firmly on it.

Procrastination is the first habit to drop in order save your dreams and desires from getting washed away.

It’s normally the reason that startups never get off the ground, simply because more time is spent on the less important things to make you feel like your making progress; however whilst putting off the important tasks to put off the risk of failing.

I don’t know if you’ve ever watched ‘How I Met Your Mother’ on T.V, but there’s an episode where Ted starts his own architecture firm. He fixates on the setup of his office: desk, computer, ornaments and such, but hasn’t started calling any clients.

He later says that the longer he puts off calling clients, the longer he can say he owned an architecture firm that wasn’t a complete failure.

I don’t know how people expect to get anywhere by being lazy. Many of us are though. We weren’t born like that, we didn’t spend our childhoods sleeping in till noon, doing nothing but watching T.V and eating crap all day long.

But as you become older you get hit by problems, gain more knowledge about, and more responsibility within the world.

It’s at that point where you start to develop the habit of sitting back, doing things when you feel like it and generally becoming the lazy person you might be today.

Being lazy generally means that you won’t be willing to get up early, work hard and grind to get where you want to be.

You may have the desire to, but because of this bad habit you have, the discipline and drive just won’t be there in order to communicate with your mind and body to get up and do it.

They say that the temptation to quit is greatest right before people succeed. In other words, when you feel like you have nothing left and you’re ready to throw in the towel, hold on. Success might be right around the corner.

If you quit things very easily and early on with any new hobby or venture you undertake, then you’ll never get past that point of success with them. It’s not because you can’t do it, because you can. It’s because you quit before you even had time to get good at it.

The only time quitting makes sense is when you’ve either realized that it’s definitely not what you want to do. 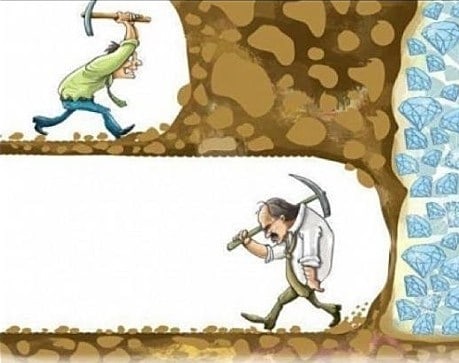 There are far too many excuses that people will tell themselves daily, that to be honest are pretty terrible. It reminds me of when you sat back in class at school, and would hear every possible excuse being used as to why someone didn’t hand in their coursework on time.

And by the time you got asked, you had to come up with a unique excuse that hadn’t been used before, just to give you a better chance of being let off.

I’ll be honest, you can tell yourself every excuse that you want to. Nobody else cares whether you give yourself excuses or not, and they certainly won’t be benefiting you in any way apart from making things easier for you in that very short period.

Every time you begin to think of an excuse, think of where you’d be 3 years from now if you told yourself that one excuse every day.

Would you be exactly where you are now?

A guaranteed habit that kills people’s dreams and desires, is negative thinking, which the majority of us will see on pretty much a daily basis, whether it be within ourselves or from watching others.

It was only a week or so ago that I wrote an article on “5 Signs You Have a Negative Outlook on Life & How to Fix it”, which may be worth the read if you think this point applies to you.

The one sign in that article which is incredibly important if you’re to succeed with all your dreams and desires, is to do with opportunity, and it’s important that you stop thinking so much about all the negatives and that you look at the positives within every opportunity presented to you.

Grasp every opportunity. There will be negative sides to be overcome but just think about the positive outcome. This is one habit every dreamer needs to kick.

Dreams involve money in pretty much every case. Whether you want to go travelling, or start your own business, become a professional athlete and so on. They all require various amounts of cash in order to get there.

It’s certainly not the main factor, but it’s a pretty important one, and you probably aren’t helping yourself by buying everything in site that will go out of fashion within the next year or so.

Your dreams require spending money, just the same as going out and buying expensive clothes or electronics, but the difference is that when you put your money in yourself and what you want for your future, it’s an investment.

It’s definitely not a waste of money. So think twice before you buy that new car, or that new games console, and invest the money in yourself.

Investing is better than spending or saving. The returns from it have the potential to be far greater.

Social Media kills time, a lot of time. It’s a bad habit, but also a very good one in order to meet new people and as a business or entrepreneur to promote yourself and make new connections.

But for now, we’re calling it a bad habit simply for the fact that so many people get distracted by it whilst trying to do some work.

Why do you think so many companies block you from accessing social media websites whilst at work?

Simply because they’re addictive and you’ll end up wasting the companies time. This is definitely one habit to control in order for you to get your work done and progress with the things you’re trying to achieve.

It may sound a bit strange when you read the title. “Surely being comfortable is a good thing right?”

And in the mean time, you’ve stopped working hard, stopped pushing yourself and stopped chasing your dreams.

One day you’ll stop and realize how much time you’ve wasted being comfortable, for it all to now come crashing down on you and put you in a position far, far from it.

Here’s a quick recap on the 8 bad habits that kill people’s dreams:

How many of these bad habits do you currently possess? Leave a comment below.