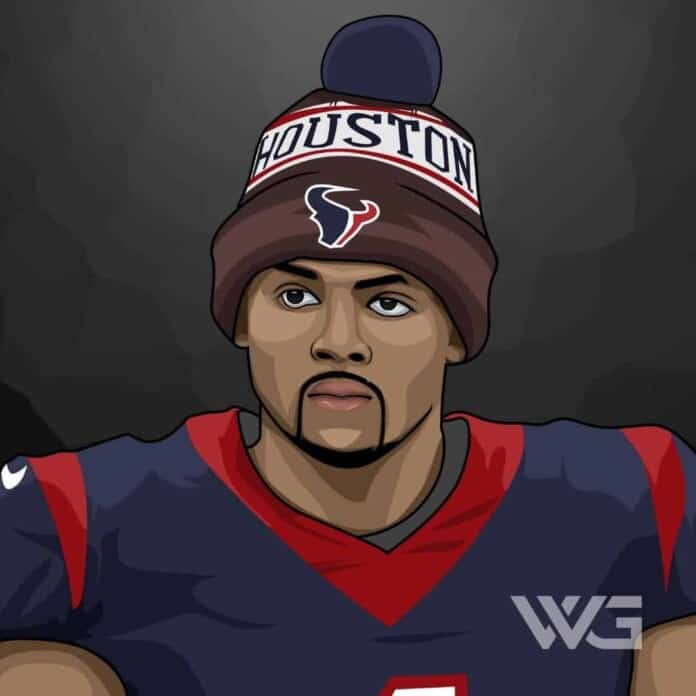 What is Deshaun Watson’s net worth?

Deshaun Watson is an American football quarterback for the Houston Texans of the NFL.

Watson played college football at Clemson and led the team to a CFP championship game appearance in 2015 and a national championship win in 2016. He was selected by the Texan’s 12th overall in the 2017 NFL Draft.

As of November 2022, Deshaun Watson’s net worth is roughly $50 Million.

Derrick Deshaun Watson was born on the 14th of September, 1995, in Gainesville, Georgia. He attended Gainesville High School, arriving there in the fall of 2010.

On May 12, 2017, the Texans signed Watson to a four-year, $13.84 million contract featuring an $8.21 million signing bonus. Watson made his first regular-season appearance on September 10, 2017, against the Jacksonville Jaguars.

The following year, against the New England Patriots in the season opener, Watson returned from an injury and threw for 176 yards with a touchdown and an interception and rushed eight times for 40 yards as the Texans lost by a score of 20–27.

In the season opener against the New Orleans Saints on Monday Night Football, Watson completed 20 of 30 passes for 268 yards, three touchdowns, and an interception while also rushing for 40 yards and a touchdown as the Texans narrowly lost by a score of 30-28.

During a Week 3 27-20 road victory against the Los Angeles Chargers, he threw for 351 yards and three touchdowns, including a 53-yard touchdown to tight end Jordan Akins.

Here are some of the best highlights of Deshaun Watson’s career:

“Do you know what coverage they were playing? I’m just asking. It’s Cover 4, so what the safeties are doing, they’re playing deep, and they’re guarding No. 2. The corners sink, and they trap [No.] 2. So what they’re doing is keeping everything in front, the linebackers are playing anything that crosses.” – Deshaun Watson

“Sometimes they play man, sometimes they drop out and play Tampa. They do a little blitz zone, they try to do it — their pressure in empty was to bring the star, press him, and cap the safety. But I just threw hot both times.” – Deshaun Watson

“They did a little other stuff, but then zone-read package they made sure they contained me and not let me pull it. So we just locked in on each and every play and we tried to make sure that we knew exactly what they were doing.” – Deshaun Watson

Now that you know all about Deshaun Watson’s net worth, and how he achieved success; let’s take a look at some of the lessons we can learn from him:

You correct the mistakes, and you move on.

It’s important to care about health. Watson’s health has always been his first priority. If it’s something that is going to make it worse, or if he’s not cleared by the doctors, then, you know, he won’t step on the field.

You just always have to protect yourself. Try not to take any unnecessary hits.

How much is Deshaun Watson worth?

Deshaun Watson’s net worth is estimated to be $50 Million.

How old is Deshaun Watson?

How tall is Deshaun Watson?

What do you think about Deshaun Watson’s net worth? Leave a comment below.