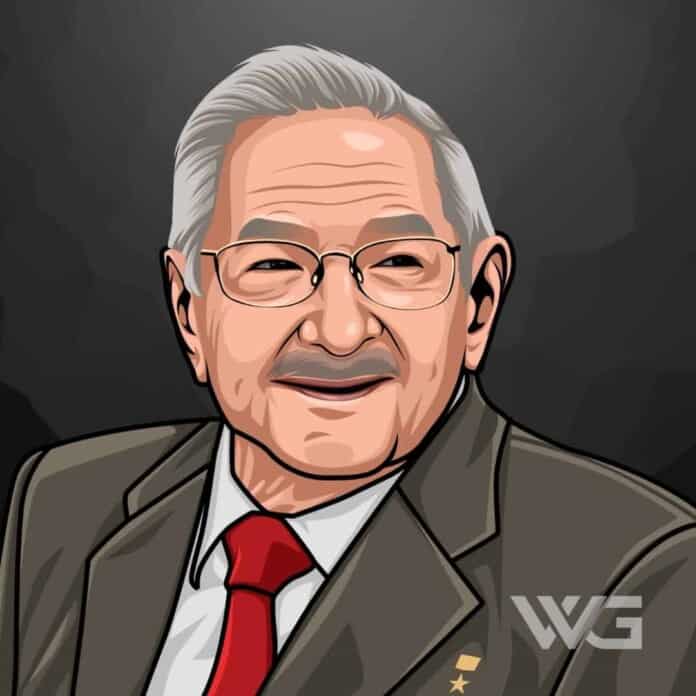 What is Raúl Castro’s net worth?

Raúl Castro is a Cuban politician who serves as the First Secretary of the Communist Party of Cuba.

He has been a member of the Politburo of the Communist Party of Cuba.

From 1959 to 2008, he served as the Minister of the Armed Forces. Because of his brother’s illness, he became the acting President of the Council of State in 2006.

Castro was raised by a Spanish immigrant father alongside his two brothers and four sisters. After graduating from secondary school, he studied social sciences.

Castro fell behind at school, but he was still very interested and involved in politics. He joined the Socialist Youth. All three brothers joined in students’ protests.

In 1952, his brother was nominated by Partido Ortodoxo to run for the election of the House of Representatives.

In 1953, the Cuban Revolution started. After the revolution was successful, he became the First Vice President of the Cuban Council of State of the National Assembly of People’s Power when it was established in 1976. He held this position until 2008.

In 2006, Fidel underwent surgery due to an illness, and Raúl continued to act as the head of state for Cuba. He won the election in 2008 and became the new president.

Castro met Pope Benedict XVI in 2012, who visited him in Cuba. The following year, he was reelected by the National Assembly.

On the same day, he would step down in 2017, at the end of his second five-year term.

His most notable acts as a president involved normalizing relations with the United States.

In 2015, the nations resumed full diplomatic relations. After the election of Donald Trump, Castro became critical of US foreign policies.

In 2019, Castro was banned from entering the United States after he supported the Maduro government.

Castro has won many awards over the course of his life. These include the Hero of the Republic of Cuba.

How Does Raúl Castro Spend His Money?

Raúl Castro owns a beautiful mansion in Havana that comes with many luxurious amenities.

Castro lives like a king, and his luxurious Havana mansion comes with a jacuzzi, private terraces, and four bedrooms.

His granddaughter currently rents it out. The mansion is available for up to 10 guests.

Here are some of the best highlights of Raúl Castro’s career:

“As I’ve already told my council of advisers, I read all of the Pope’s speeches, if the Pope continues to speak like this, sooner or later I will start praying again, and I will return to the Catholic Church – and I’m not saying this jokingly.” – Raul Castro

“I promise that I will go to all of his Masses — and with satisfaction. I left the meeting this morning impressed, very impressed by his knowledge, his wisdom, modesty, and by all the virtues that we know he has.” – Raul Castro

“This expression by President Barack Obama deserves respect and recognition by all the people, and I want to thank and recognize support from the Vatican and especially from Pope Francis for the improvement of relations between Cuba and the United States.” – Raul Castro

“Yes, we have conducted solidarity with other peoples that could be considered terrorism — when we were cornered, when we were strongly harassed, we had no other choice but to give up or to fight back.” – Raul Castro

“Only the Communist Party, as the institution that brings together the revolutionary vanguard and will always guarantee the unity of Cubans, can be the worthy heir of the trust deposited by the people in their leader.” – Raul Castro

“In Cuba, taking into account the long fight for our independence and sovereignty, we will defend the one-party system in the face of the games, demagogy and the marketing of politics.” – Raul Castro

Now that you know all about Raúl Castro’s net worth and how he achieved success; let’s take a look at some of the lessons we can learn from him:

Preventing war is tantamount to winning a war.

Be gentle to all and stern with yourself.

Your hardest times in life often lead to the greatest moments of your life. Keep going. Hard and tough situations build strong people in the end.

How much is Raúl Castro worth?

Raúl Castro’s net worth is estimated to be $100 Million.

How old is Raúl Castro?

How tall is Raúl Castro?

Raúl Castro is a Cuban politician who is the brother of Fidel Castro.

After Fidel stepped down in 2011, Raúl Castro became the new First Secretary of Cuba.

He has been counted amongst Cuba’s top-ranked military officers since the revolution.

After his brother became the president, Raul made sure that the administration was purged of loyal men.

What do you think about Raúl Castro’s net worth? Leave a comment below.