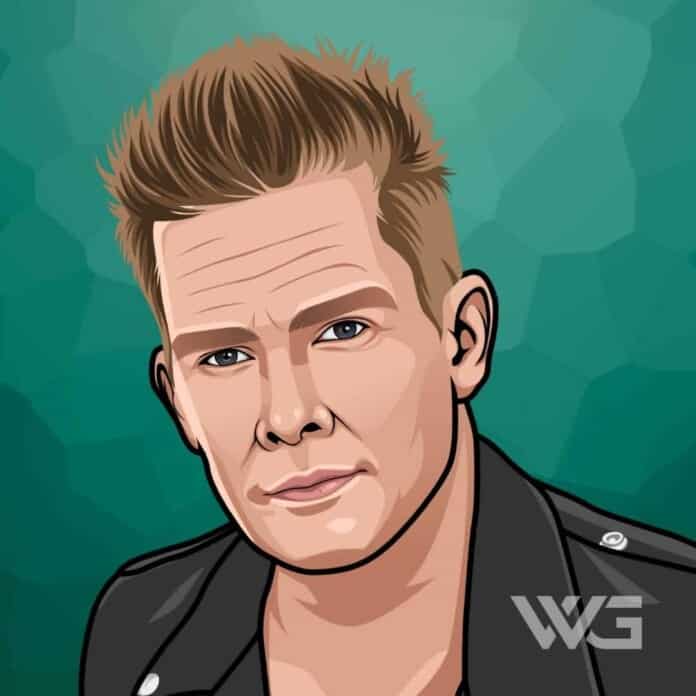 What is Mark McGrath’s net worth?

Mark McGrath is an American singer.

McGrath is the lead vocalist of the rock band Sugar Ray. He is also known for his work as a co-host of ‘Extra,’ and he was also the host of ‘Don’t Forget the Lyrics’ in 2010.

He hosted the second season of the TV show ‘Killer Karaoke’. In 2018, he was cast to compete in the first season of ‘Celebrity Big Brother.’

Mark Sayers McGrath was born on the 15th of March, 1968, in Hartford, Connecticut. His family moved to Newport Beach when he was 8 years old. He attended Corona Del Mar High School in Newport Beach. He later married Carin Kingsland in 2012. The couple met in 1994.

McGrath is often confused with American actor Ethan Hawke, both having an ongoing joke with signing autographs. McGrath signs him as “Ethan Hawke,” and Ethan Hawke signs his as McGraths.

His personal popularity came as he appeared on such national magazine covers as Rolling Stone and Spin. He made many appearances on MTV, VH!, and various talk and award shows. In 1998, he was named “Sexiest Rocker”.

He contributed the song ‘Reaching Out’ as a tribute album to vocalist James Lynn Strait. He appeared in the video of ‘Angel’s Son,’ another song written for the album. It was performed with the band during their appearance on ‘The Tonight Show with Jay Leno‘.

In 2013, McGrath and Everclear’s Art Alexakis decided to slit their ways. He formed the “Under the Sun Tour” with Sugar Ray, Smash Mouth, Gin Blossoms, Vertical Horizon, and Fastball. In 2018, he appeared in Smashing Pumpkins’ ‘Silvery Sometimes (Ghosts’ video.

How Does Mark McGrath Spend His Money?

Mark McGrath has helped out charities such as Project HOME.

McGrath has helped different charities throughout the years. Some of these charities include Project HOME.

Here are some of the best highlights of Mark McGrath’s career:

“Of course, we wrote the songs accordingly and performed and recorded them that way. At that time, we really thought it was right, but you know, seen in retrospect, it made the album sound forced, and not really great.” – Mark McGrath

“With acting, there are a lot of subtleties and non-verbals involved. If someone is over there getting eaten by a shark, there’s a non-verbal way of acting that. There’s a certain nuance to acting that does not come intuitively to me. It’s something I still have to learn.” – Mark McGrath

“Acting is something where you have to completely remove yourself. So, do I find acting easy? Absolutely no! Do I want to do more of it? Do I enjoy doing it? I feel appreciative to get this opportunity Absolutely!” – Mark McGrath

“I’m not a fighter, but I would love to be a boxer because I love the courage and toughness. I mean, there can be nothing more terrifying than walking into an arena and looking at Mike Tyson in the ring.” – Mark McGrath

“I know some people still think they are Kurt Cobain in my generation, and that’s fine. That keeps them motivated. But when I think you realize where you are, you really get happy with the space you’re in. You stop fighting against everything. And when you come to see Sugar Ray, I’m going to sing our hits with all the vigor and joy and happiness that I can.” – Mark McGrath

“The most surprising thing about looking back is we all look back at it with rose-tinted sunglasses. I obviously lived in the nineties. I had the peak of my career in the nineties, and I don’t think it was all that great when we were living in the nineties.” – Mark McGrath

Now that you know all about Mark McGrath’s net worth and how he achieved success; let’s take a look at some of the lessons we can learn from him:

There are a lot of people out there who are just waiting that us fail. They brought up the theory that we’re one-hit wonders, and they want us to fall flat on our noses to prove them right.

Today they’re praising you sky high, place you on a pedestal, and tomorrow they don’t want to know you. Don’t expect things.

Collect some ideas, wait and see what’s going to happen. That’s it.

How much is Mark McGrath worth?

Mark McGrath’s net worth is estimated to be $6 Million.

How old is Mark McGrath?

How tall is Mark McGrath?

Mark McGrath is an American singer and television host, and he is best known for being the lead singer of the band Sugar Ray. Outside his musical career, he has worked as a host for many different TV shows such as ‘Extra’ and ‘Don’t Forget the Lyrics.’

In 2010, he hosted ‘Killer Karaoke’. He has appeared in many reality shows such as ‘Celebrity Big Brother.’

What do you think about Mark McGrath’s net worth? Leave a comment below.