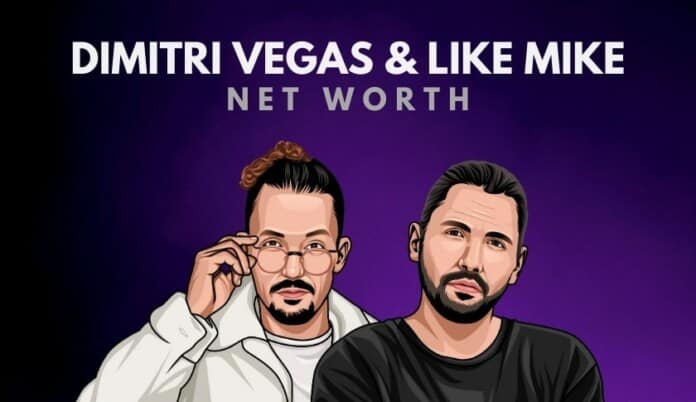 Dimitri Vegas & Like Mike are Belgian DJs and are record production duos, composed of brothers Dimitri Thivaios and Michael Thivaios. They were ranked No. 1 in 2015 and 2019.

Born in Belgium, Dimitri and Michael Thivaios are of Greek origin. The brothers grew up in the Flemish town of Willebroek. They began to make their first steps as DJs reportedly at a young age.

Dimitri then left Flanders in 1999 and began touring Europe. He lived in Mallorca and then in Halkidiki, Greece before moving to Ibiza in 2003, where he was a resident in major clubs such as Privilege and Space.

They made their names in Ibiza after securing residencies at respected nightclubs Privilege and Space. Next, after being made resident DJs of the nightclubs The End and Amnesia in Zante, Greece in 2006, they produced their first single, ‘La Cocaina’ which was released on white label the following year.

A slew of miscellaneous releases followed, but it was when their 2008 remix of Dave Lambert & Housetrap’s ‘Work That Body’ was noticed by Axwell who then enlisted them to remix Abel Ramos’ ‘Rotterdam City of Love’ for his label Axtone – that DJ stardom beckoned.

They hosted the Tomorrowland EDM festival in 2010, and the following year collaborated with Afrojack and Nervo on the smash single ‘The Way We See the World.’

The brothers racked up numerous pop hits in Belgium and other European countries, including ‘Chattahoochee’ and ‘Find Tomorrow (Ocarina),’ which both hit number two in Belgium.

Their singles ‘The Hum’ and ‘Higher Place’ hit number one in Belgium as well as the top of the Billboard dance chart. In 2016, they collaborated with Dutch production duo W&W on the single ‘Arcade’.

Here are some of the best highlights of Dimitri Vegas & Like Mike’s career:

“We both left Belgium at an early age and I moved abroad to work as a tour operator and DJ. I always wanted to be involved in music and that’s where it began, from here I worked in Ibiza and the rest led me back to Belgium, where Mike and I started making music in his homemade studio.” – Dimitri Vegas & Like Mike

“We’ve both been big fans of each other’s work for a while, and we were looking for a vocal line for the track and he fitted into the type of topline we wanted for the song.” – Dimitri Vegas & Like Mike

“We have so many amazing shows lined up and we’re excited heading into the festival season. It’s difficult to pinpoint any shows as they are so diverse so we can create memories with each show in different ways. Ibiza is always special for us and to be back at Ushuaïa for our Garden Of Madness party is one we’re especially looking forward to.” – Dimitri Vegas & Like Mike

“Playing the mainstage at Tomorrowland is always a highlight of the year for us. There is no festival like it and gets better every year. it never ceases to amaze us year on year and to play on home soil to such an educated crowd makes it a standout show every time we perform there.” – Dimitri Vegas & Like Mike

Now that you know all about Dimitri Vegas & Like Mike’s net worth, and how he achieved success; let’s take a look at some of the lessons we can learn from him:

Fear is not a good teacher. The lessons of fear are quickly forgotten.

Don’t be pushed by your problems. Be led by your dreams.

Dimitri Vegas and Like Mike is one of the most popular DJs of this era. From the age of 14, the pair began to DJ around their local nightclubs and became presenters on the Belgium radio station BeatFM a few years later.