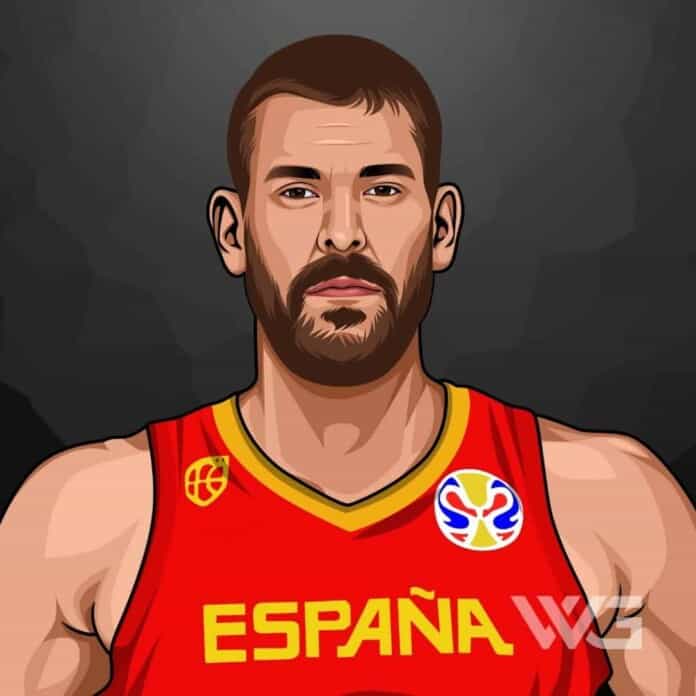 What is Marc Gasol’s net worth?

Marc Gasol is a Spanish professional basketball player for the Toronto Raptors of the NBA.

Gasol was drafted 48th overall by the Los Angeles Lakers in the 2007 NBA draft. He is a two-time All-NBA Team member, a three-time NBA All-Star, and an NBA champion.

As of December 2022, Marc Gasol’s net worth is approximately $70 Million.

Gasol moved as a teenager with his parents to the Memphis suburb of Germantown, Tennessee, in 2001, after his older brother Pau was drafted by the Atlanta Hawks and then had his rights traded to the Memphis Grizzlies.

Gasol was selected with the 48th overall pick by the Los Angeles Lakers in the 2007 NBA draft. The following year, his draft rights were traded by the Lakers to the Memphis Grizzlies as part of a trade package that included his older brother, Pau.

In 2013–14, Gasol played a career-low 59 games for the season. He was sidelined for two months in November 2013 with a knee injury, and in those 23 games he missed, the Grizzlies were just 10-13 and had a season-high five-game losing streak in that time.

Here are some of the best highlights of Marc Gasol’s career:

“It’s a special group of guys; it’s always special when you put on this jersey. And I couldn’t leave them hanging. That’s what my heart told me, and that’s what it keeps telling me.” – Marc Gasol

“I cherish every second of it, every practice, every trip, every lunch that we have together; I know how special it is. Obviously, it’s not ideal, but I think it was completely worth it to play all the way to June. … Whenever it is, 10 years from now when I’m sitting on the beach in Spain, I won’t be able to reproduce this feeling.” – Marc Gasol

“The game is over, we got to look back at it and learn, but we can’t think too much about it. You come out of Game 2 and try to win. You cant replay this one.” – Marc Gasol

“The Grizzlies’s nothing new; we feel comfortable at the end. The ball bounced their way, and they won the game. You have to stay positive and think about the next game.” – Marc Gasol

Now that you know all about Marc Gasol’s net worth and how he achieved success; let’s take a look at some of the strongest lessons we can learn from him:

If everything seems to be under control, you’re not going fast enough.

Most people miss opportunity because it is dressed in overalls and looks like work.

The only difference between ordinary and extraordinary is that little extra.

How much is Marc Gasol worth?

Marc Gasol’s net worth is estimated to be $70 Million.

How old is Marc Gasol?

How tall is Marc Gasol?

Marc Gasol is a Spanish professional basketball player who was drafted #48 by the Los Angeles Lakers in the 2007 NBA Draft, but he was traded to the Memphis Grizzlies, where he has played since 2008.

What do you think about Marc Gasol’s net worth? Leave a comment below.