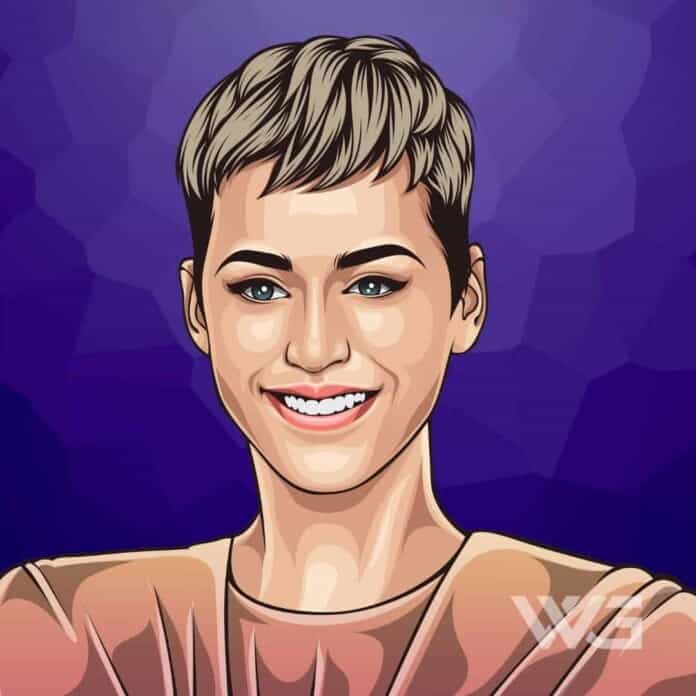 What is Katy Perry’s net worth?

She initially gained recognition when she released her debut single ‘ I Kissed a Girl’ which topped the U.S Billboard Hot 100 list that year.

Today Katy Perry is one of the best pop singers in the world.

Katheryn Elizabeth Hudson “Katy Perry” was born in Santa Barbara, California on the 25th of October, 1984.

She is the daughter of Pentecostal pastors Maurice Keith and Mary Christine Hudson. Perry has one younger brother named David and an older sister named Angela.

Growing up Perry primarily listened to gospel music which she later wanted to focus on doing later in her career. After leaving Dos Pueblos High School she signed to music label ‘Java’ where she pursued her career as a musician.

Katy Perry’s career started when her first gospel music album was launched in 2001.

However the album was not quite successful, so eventually, she shifted from gospel music to popular music. At the age of 17, Perry traveled to Los Angeles and recorded a few songs with some music labels.

In 2005 the movie ‘The Sisterhood of the Travelling Pants’ included a song by Katy Perry. She also featured in a music video ‘Learn to Fly’. Perry’s big breakthrough came in 2007 when she finally signed a contract with the ‘Capitol Records Company’.

Perry’s debut single ‘I Kissed a Girl’ was released in 2008 and received well by the listeners making it top the music charts in several countries.

The song also topped the U.S Billboard Hot 100 list and became viral. The same year Perry already was engaged in the ‘Warped Tour’ and the following year she went on the ‘Hello Katy Tour’.

One year later Perry named her new music live album ‘MTV Unplugged’ which included five singles from the album ‘One of the Boys’. Perry was also the duet singer along with Timbaland in the song ‘If We Ever Meet Again’.

Perry made an autobiographical documentary titled ‘Katy Perry: Part of Me’ which was a huge hit in the theatres in 2012. In 2013 she starred as a voice actress in the animated film ‘The Smurfs 2’ which was the sequel of ‘Smurfs’.

Here are some of the best highlights of Katy Perry’s career:

I know that I have sex appeal in my deck of cards. But I like to get people thinking. That’s what the stories in my music do.” – Katy Perry

“I saw a spider-I didn’t scream ’cause I can belch the alphabet-Just double dog dare me! And I chose guitar over ballet and I take these suckers down ’cause they just get in my way. Then you look at me kinda like a little sister-You high five your goodbyes and it leaves me nothing but blisters- I don’t want to be one of the boys, one of your guys-Just give me a chance to prove to you tonight that I just wanna be one of the girls, pretty in pearls and not one of the boys.” – Katy Perry

“People always ask me, ‘What is it that you regret?’ And I say, ‘nothing because I could not buy what I’ve learned.’ And I apply those things to my life I learn. And hopefully, hopefully, it helps me to be a better human in the future and make better choices.” – Katy Perry

“The internet is such a strange place. You can put up one thing on there like, Katy Perry was a taekwondo master of the black belt! When really all I did was one kickboxing class. That’s how I think my short time in doing my gospel record was like.” – Katy Perry

View our larger collection of the best Katy Perry quotes!

Now you know all about Katy Perry’s net worth, and how she achieved success; let’s take a look at some of the lessons we can learn from her:

1. Be honest about your struggles

People are usually shy of being vulnerable. We always want to maintain a shining face, to show those around us that everything is good. Be honest about your struggles.

Being our true selves can be hard these days. The norms and conventions that we are exposed to in society sometimes confine us to behave and think in a certain way. Be who you are, and always stand up for what you believe in.

3. Success is not the absence of obstacles

It is to persist in our purpose even in the midst of challenges and discouragement. Perseverance is not an easy quality to cultivate within ourselves. Our natural tendency is to throw in the towel and give up.

How much is Katy Perry worth?

Katy Perry’s net worth is estimated to be $330 Million.

How old is Katy Perry?

How tall is Katy Perry?

Katy Perry is a pop queen who has released hits such as ‘I Kissed a Girl’, ‘Last Friday Night’ and ‘Rise’.

She has influenced many and taken the world by storm throughout her career. Perry has also been voted as one of the hottest women in the world.

There is no doubt that her net worth will increase in her next five years.

As of February 2023, Katy Perry’s net worth is approximately $330 Million.

What do you think about Katy Perry’s net worth? Leave a comment below.

What is Waka Flocka Flame's net worth? Introduction  As of ...