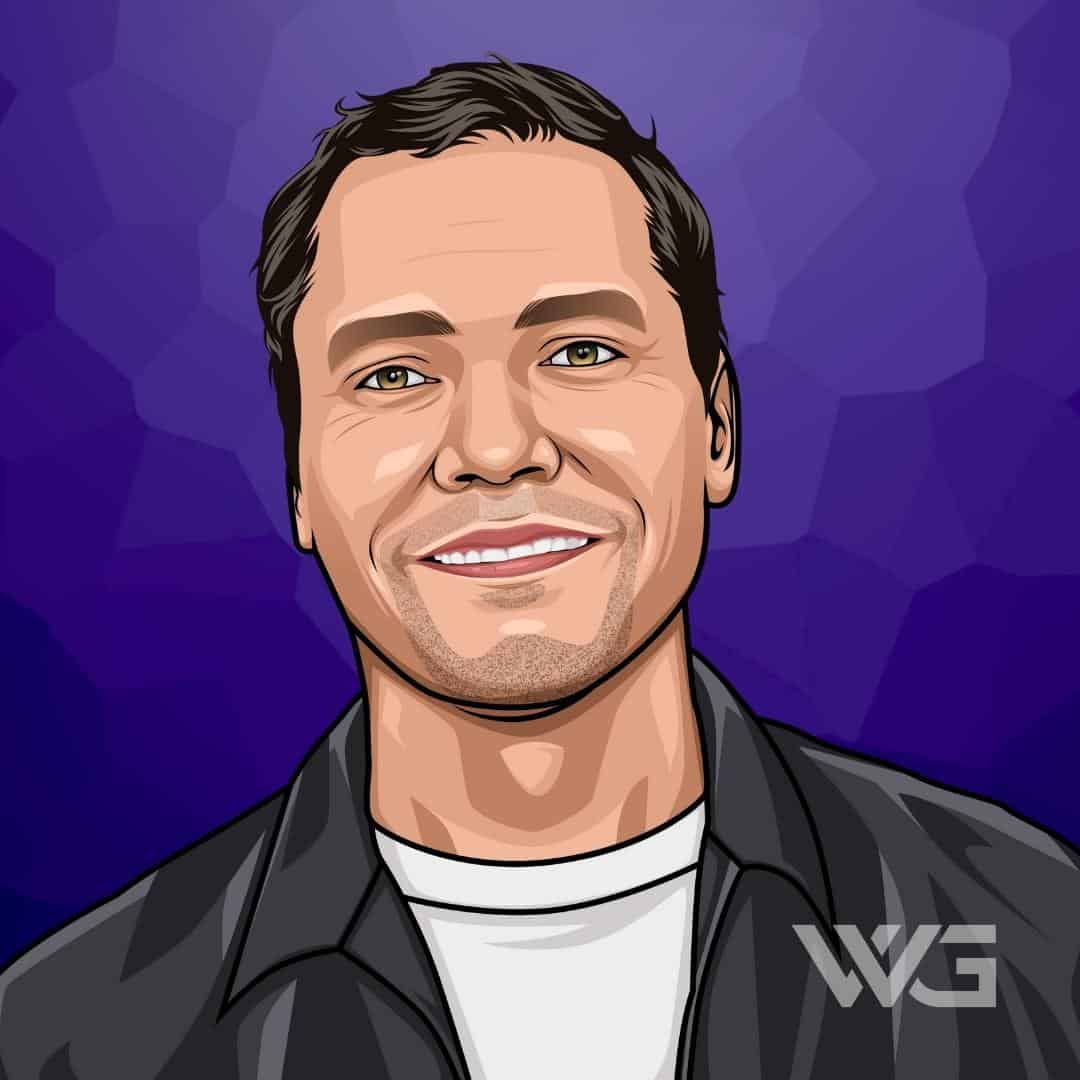 What is DJ Tiesto’s Net Worth?

DJ Tiësto is a Dutch DJ, known as the “Godfather of EDM”. He is famous worldwide, having appeared on over 117 charts.

His debut and the most recognized event of his career was his performance at the Home Depot Center in 2011.

This event was headlined as “the largest single headline DJ show in US history. His talent and showmanship have earned him the “Greatest DJ of All Time” tag.

Tijs Micheil Verwest was born on 17 January 1969, in Breda, Netherlands.

He and his brother and sister were brought up by their single mother. During his school years, Tiësto was passionate about soccer, going on to play for “Vesting Boys” and “Saint Anna Boys Club”.

Tiësto’s love for music blossomed at the age of 12. He would listen to radio shows such as “In The Mix” and the Ben Liebrands, “Ferry Maat Soul show”. As he grew up, he knew that he had to start working towards his music goal, which was to work in the music industry.

He started by mixing random genres of music to create new and unique tracks. He started selling a few of the tracks, which helped him out financially. Unfortunately, his music wasn’t bringing in enough cash, so he worked in a variety of restaurants to make money.

His career took off when he started performing at house parties and then at clubs, when he gained more confidence. His first club performance was at Spock in 1985, when he played “new beat” and “acid house” tracks.

Tiësto’s big break occurred in 1994 when the manager of Basic Beat Recordings offered him a contract.

He met DJ Arny Bink and the duo released multiple tracks under the label “Trashcan Records” and four albums under the “Guardian Angel Records” label during the mid-1990s.

“Magik Series”, a collection of trance music tracks, was the first album released under Tiësto’s label.

Not long after, Tiësto released two sub-labels, “Song Bird” and “In Trance We Trust”. He collaborated with Ferry Corsten on the Gouryella project, with the trance music compilation appearing in the top ten list of the UK Singles Chart.

His next big project was Kamaya Painters. This project collaborated with another top DJ, Benno De Goeij. The first installment of the series, “In Search of Sunrise”, was released to wide acclaim.

“Summerbreeze” was released on the 10th of October 2000, hitting the top of the US billboard charts soon after.

He caught the eye of the Olympic committee and was asked to become the first ever DJ to play on the Olympic stage. Afterward, Tiësto released an album, Prade of the Athletes, that included the track he played at the Olympic event.

One of his biggest album successes was Elements of Life, which was released in 2007. The album reached the top of the Dutch album charts and the US Billboard Top Electronic Albums. It also went on to be nominated for a Grammy Award in 2008.

He opened his first-ever restaurant and club combination, Cineac, in collaboration with a brigade of Chinese Michelin chefs. You can see what it looks like on his official Instagram account, but it’s been renamed, Mansion.

His fifth and latest album, A Town Called Paradise, was released in June 2014 under multiple labels. Many of the tracks on the album became record-breaking successes across the world.

Tiësto’s unique style and sound earn him millions for each live performance. With royalties from his album sales, his annual income is now over $15 million and will continue to grow as his fanbase grows.

DJ Tiësto currently has seven studio albums on release which generate more than $40 million each year.

Here’s a breakdown of DJ Tiësto’s annual net worth:

Tiësto got married in September 2019 to model Annika Backed. They have two children together; a daughter, Viola Margreet Verwest, and a son, Viggo Tiësto Verwest.

With Tiësto’s previous passion for soccer, he has revealed that he is a big fan of the Italian football club Inter Milan, home to some of the richest soccer players in the world such as Zlatan Ibrahimovic and Samuel Eto.

Such is his love for the club, that he’s collaborated with them numerous times.

Tiësto’s career as a DJ has progressed at a rapid pace right from the start. His innovative sound and amazing ear for a beat have propelled him to the top of his genre.

This is reflected in the recognition he’s received for the quality of his albums and his contribution to the music industry.

Here are some highlights from DJ Tiësto’s career:

With dozens of events lined up and at least 4 countries on his current itinerary,  Tiësto is sure to make his presence felt in upcoming award ceremonies.

How Does DJ Tiësto Spend His Money?

Tiësto has a love for clothes and especially Gucci. But even with his champagne taste in clothing, he will still buy the same item of clothing for less from another brand, as long as it looks like the original Gucci. He can’t be seen rubbing shoulders with the richest models in the world if he looks tatty.

Tiësto owns one of the most expensive cars in the world, an Aston Martin V8 Vantage.

Even though he splurges big on luxuries, Tiësto is known for his philanthropic work. He primarily supports the Global Poverty Project and RED.

He has also been named the official ambassador worldwide for the Dance4life Foundation, which promotes the awareness and treatment of HIV and Aids.

As a DJ, Tiësto has been riding high right from the beginning of his career. Creating his unique sound has built him a massively loyal audience who follow him to each new venue. They purchase all of his work and he can muster massive crowds at his events.

Here are some of the best highlights of DJ Tiësto’s career:

It was trendy in the 90s for Dutch DJs to make their names sound Italian in origin. DJ Tiesto made up his name by adding an “O” at the end in an attempt to stand out.

And we’re sure that the next decade is going to see his music performances continue to stand out for the pure skill and mastery that he displays.

In keeping with most musicians, DJ Tiësto feels emotions deeply, which is reflected in his music. He is also cognisant of his role in society and feels a strong need to give back.

Tiësto is not taken in by the fake celebrity vibe and tries to keep it real both in his personal life and when on stage.

Here are our favorite quotes from DJ Tiësto:

While DJ Tiësto has experienced a meteoric rise to the top, he’s aware of just how hard it is to both make it and keep his top spot.

This means that he strives constantly to do his best, taking pride in his work ethic and ability to produce crowd-pleasing tracks.

Now that you know all about DJ Tiësto’s net worth, here are some of the best success lessons to learn from DJ Tiësto:

Always follow your passion and if you’re not passionate about it don’t pursue it.

If you do what you love, things will eventually fall into place. It is far easier to keep your commitment to something if you love what you do.

3. If You Work Hard, You’ll Reach The Top

Work hard and start from the bottom to reach the top. It won’t always work out, but hard work will get you 90% of the way to your goal.

DJ Tiësto’s only goal is to share music with as many people as he can. He has successfully become one of the wealthiest DJs in the world by following his passion for music. He is committed to performing and producing tracks until he can no longer perform or share his music.

Even at the age of 50, Tiësto shows no sign of slowing down. He’s bringing new music to the world while living the life he always dreamed of.

What do you think about DJ Tiësto’s net worth? Leave a comment below.