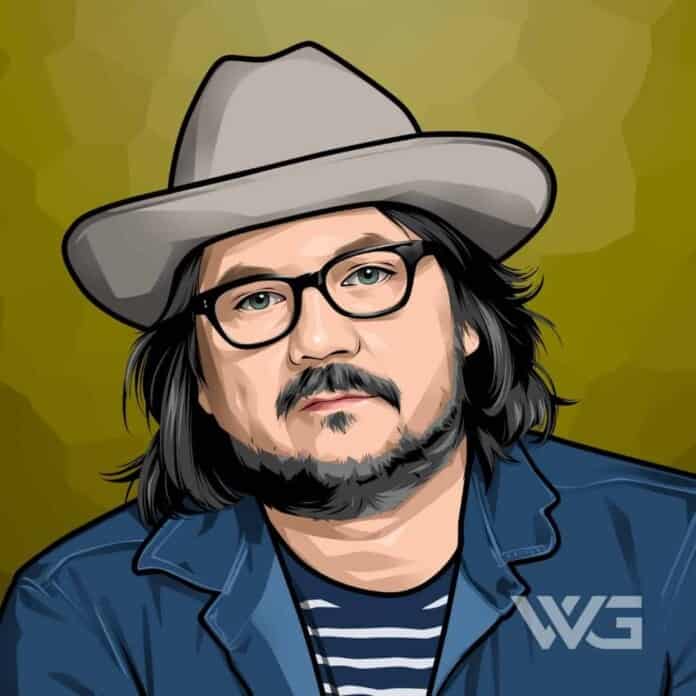 What is Jeff Tweedy’s net worth?

Jeff Tweedy is an American songwriter, musician, and author.

Tweedy is best known as the singer and guitarist of the band Wilco. He started his music career in high school in his band The Plebes with Jay Farrar. It transitioned into the alternative country band, Uncle Tupelo.

Jeffrey Scot Tweedy was born on the 25th of August, 1967, in Belleville, Illinois.

Tweedy is the fourth child of Bob and JoAnn Tweedy. He has three siblings: older brother Greg Tweedy who died in 2013, brother Steven Tweedy, and sister Debbie Voll.

His mother bought him his first guitar when he was 6 years old, although he did not play it seriously until he was 12 years old. Tweedy told people that he knew how to play the guitar once he got his first guitar, even though he couldn’t.

In the early 1980s, Tweedy joined the band The Plebes, which he joined in qualifying for a battle of the bands competition, which they won. Tweedy pushed The Plebes away from the rockabilly music that they had been playing.

Tweedy enrolled at many different universities but dropped out eventually. He then met Tony Margherita. After Margherita saw the band perform at an acoustic concert in 1988.

During times when Uncle Tupelo was not touring, Tweedy and Farrar played as Coffee Creek, a short-lived cover band with The Bottle Rockets’ Brian Henneman and Mark Ortmann.

In 1994, Farrar called Tony Margherita to tell him that the band was breaking up, saying that he was not having any fun in the band anymore and was not getting along with Tweedy. Tweedy was enraged that Farrar decided to break up the band without notifying him.

How Does Jeff Tweedy Spend His Money?

Jeff Tweedy spends some of his money on real estate and charity work.

Here are some of the best highlights of Jeff Tweedy’s career:

“The main thing I learned is that the more I can forget about being embarrassed when I make something, the more it is going to mean something to somebody else. I can’t anticipate what it’s going to be or how it’s going to be perceived, so the quicker I let go of something I make, the better.” – Jeff Tweedy

“Even when I don’t think I’m writing, I’m writing. There’s some part of my brain geared toward making songs up, and I know it’s collecting things and I know when I get a moment to be by myself, that’s when they come out.” – Jeff Tweedy

“I don’t think there is anything hard at all about having a lot of songs. It makes it easier to be less precious about them, and know that everybody’s going to want to work on some of them.” – Jeff Tweedy

“I always think I don’t have any songs, I don’t have anything I’m working on, and I get in the studio and realize there are 20 things I’m thinking about. It’s just kind of second nature.” – Jeff Tweedy

“To be honest, I’m more concerned with living my life than writing about my life. I feel like that’s really the main thing I know now that I didn’t know when I was younger — and that is that you have to have a life to write about one. If you’re more worried about having experiences so you can write about them, I think you’re kinda being ridiculous, and I think a lot of young people look at it like that.” – Jeff Tweedy

Now that you know all about Jeff Tweedy’s net worth and how he achieved success; let’s take a look at some of the lessons we can learn from him:

We live in a connected world now. Some find that frightening. If people are downloading our music, they’re listening to it.

Writing songs has always been hard and easy. It’s not always easy when you want it to be, and then sometimes it’s just like turning on the faucet.

Stop trying to treat music like it’s a tennis shoe, something to be branded. If the music industry wants to save money, they should look at some of their six-figure executive expense accounts.

How much is Jeff Tweedy worth?

Jeff Tweedy’s net worth is estimated to be $8 Million.

How old is Jeff Tweedy?

How tall is Jeff Tweedy?

Jeff Tweedy is an American musician, songwriter, and record producer. Tweedy was born in Belleville, Illinois. He is best known as the lead singer and guitarist for the band Wilco. After high school, he joined the band The Plebes with his friend. The band changed its name to The Primitives in 1984 and later changed it to Uncle Tupelo.

What do you think about Jeff Tweedy’s net worth? Leave a comment below.