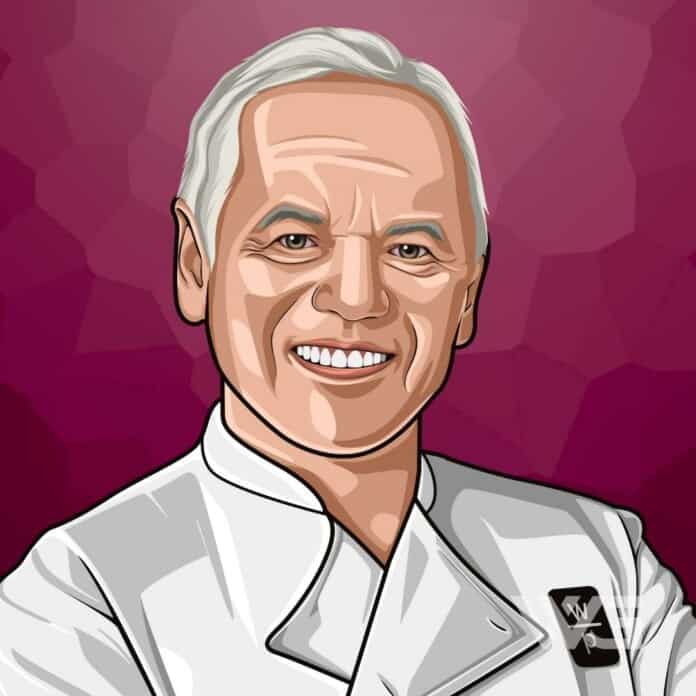 What is Wolfgang Puck’s net worth?

Wolfgang Puck is an Austrian-American chef, restaurateur, and actor from Topfschnig.

Puck moved to the United States at the age of 24. In 1973, Puck moved to Los Angeles, opening his first restaurant, Spago, in 1982. Today, he is considered to be one of the greatest chefs of all time.

Wolfgang Johannes Puck was born on the 8th of July, 1949, in Austria. His biological father left his mother shortly before Wolfgang was born, leaving her alone to raise the child.

His mother Maria later married a coal-miner called Josef Puck who adopted Wolfgang and gave him his name. Maria gave birth to two girls and a boy, providing Wolfgang with three younger siblings.

Puck’s career began when he moved to France where he was able to work in some of the finest restaurants including Maxim’s in Paris, the Hotel de Paris in Monaco, and the Michelin 3-starred L’Oustau de Baumanière in Provence.

He decided to move to the US to explore newer avenues. His first job in the US was at the restaurant La Tour in Indianapolis, where he worked from 1973 to 1975 before moving to Los Angeles.

Ma Maison was frequented by the rich and the famous and he made a name for himself as a sophisticated gourmet chef. His deep understanding of the Californian cuisine and his excellent culinary skills made the restaurant very popular.

In 1982, he opened his own restaurant Spago on the West Hollywood on the Sunset Strip. The restaurant was a success from the very first day.

Over the next few years, he opened other restaurants including Chinois on Main in Santa Monica in 1983 and Postrio, in the Prescott Hotel of San Francisco’s Union Square in 1989.

Meanwhile, Spago was becoming phenomenally popular and in 1997 he moved the restaurant to an elegant setting on Cañon Drive in Beverly Hills.

Here are some of the best highlights of Wolfgang Puck’s career:

“A good chef has to be a manager, a businessman and a great cook. To marry all three together is sometimes difficult.” – Wolfgang Puck

“Restaurants are like having children: its fun to make them, maybe, but then you have them for good and bad. You are going to have to raise them and if something goes wrong when they are 30 years old, they will still be your little boy.” – Wolfgang Puck

“For me, I don’t expect to have a really amazing meal each time I dine out. Having a good meal with your loved ones – that’s what makes the experience.” – Wolfgang Puck

Now that you know all about Wolfgang Puck’s net worth, and how he achieved success; let’s take a look at some of the best lessons we can learn from him:

1. Listen To Your Customers

Puck has long made a point of choosing his next business move based on what his fans want.

Prior to Spago, Puck worked at world-class establishments in France and headed a French-style kitchen at L.A.’s ritzy Ma Maison. But he challenged himself with his next ventures. You have to give people something new. You can’t keep working on the same old thing forever.

Perhaps Puck’s most recognizable asset is his trademark energy. At 65, he’s still looking to broaden his reach, possibly by expanding into the hotel industry.

He stated: “I love what I do, so I make this my hobby. My hobby is not golf–my hobby is cooking. Not many people still enjoy what they do when they’re 65 years old. I consider myself lucky.”

How much is Wolfgang Puck worth?

Wolfgang Puck’s net worth is estimated to be $120 Million.

How old is Wolfgang Puck?

How tall is Wolfgang Puck?

Wolfgang Puck is a celebrity chef and restaurateur, who is famous all over the world for his high-end gourmet restaurants, catering services, and cookbooks. He is also actively involved in many philanthropic endeavors and charitable organizations.

As of February 2023, Wolfgang Puck’s net worth is estimated to be roughly $120 Million.

What do you think about Wolfgang Puck’s net worth? Leave a comment below.