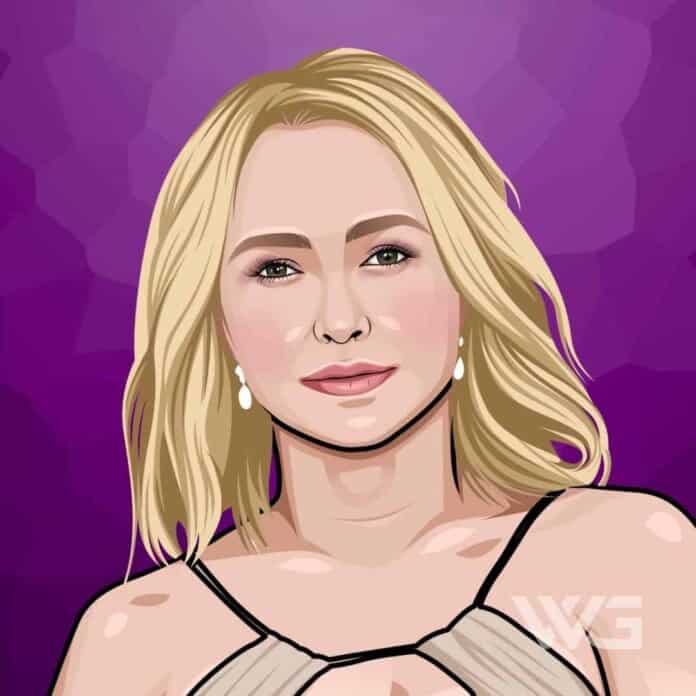 What is Hayden Panettiere’s net worth?

Hayden Panettiere is an American actress, model, and singer.

Panettiere is best known for her role on the NBC superhero series ‘Heroes.’ She is also known for portraying Juliette Barnes in the ABC/CMT musical-drama series ‘Nashville.’

Her full-time acting career began by playing Sarah Roberts on ‘One Life to Live’ and ‘Guiding Light.’

She has starred in movies such as ‘Remember the Titans’, ‘Raising Helen,’ ‘Racing Stripes,’ ‘Ice Princess’ and ‘I Love You, Beth Cooper.’

Hayden Lesley Panettiere was born on the 21st of August, 1989, in Palisades, New York.

Panettiere is the daughter of Lesley R. Vogel and Alan Lee “Skip Panettiere. She has one younger brother. Her mother’s family lives in Indiana.

After Panettiere attended South Orangetown Middle School in New York, she was homeschooled. She first appeared in commercials at the age of eleven months.

When Panettiere was 10 years old, she portrayed Sheryl Yoast in the Disney feature film ‘Remember the Titans’.

Other notable roles include her portrayal of the title character in the true-crime drama ‘Amanda Knox: Murder on Trial in Italy’ and ‘Scream 4.’

Panettiere dazzled everyone in her role as a competitive ice skater in ‘Ice Princess.’ She then went on to play the lead role in the feature film comedy ‘Raising Helen.’

Her film credits include ‘Joe Somebody’ and ‘Remember the Titans’.

Her work for ‘A Bug’s Life Read A Long’ earned her a Grammy Nomination for Best Spoken Word Album. She also received a nomination for Hollywood Reporter’s Young Star Award for Best Young Voiceover Talent.

Panettiere is an Ambassador for the IUCN Wildlife Foundation, which raises funds to support and save endangered species.

How Does Hayden Panettiere Spend Her Money?

Panettiere spends her money on real estate and charity work.

Panettiere owns a home in Nashville.

Here are some of the best highlights of Hayden Panettiere’s career:

“When I turned 18, was the first time that I really started concentrating on politics. And I started doing so because I realized that to really create and generate change, it has to come from changing laws… so I started campaigning for Norman Lear’s foundation, which was Declare Yourself.” – Hayden Panettiere

“The frustrating part of it is that you’re generally known for what you did last. I’ve had the privilege of doing some very cool independent films that, a lot of the time, the general public doesn’t see unless you’re at a film festival or you’re into that kind of movie.” – Hayden Panettiere

“I spend so much time with the brightest and most talented and well-rounded people. I’ve had the privilege of having long and very intellectual conversations with people, and sometimes I sit there and listen. It’s like a better version of a class. Even though I’m not sitting at a desk and in school, I’m still learning all the time.” – Hayden Panettiere

“I actually had an experience where I thought somebody was breaking into my house. That’s got to be the most terrified I’ve ever been in my life. I don’t know if that’s saying much. The fear, especially as a female in a house by yourself, was horrible.” – Hayden Panettiere

“I like to dedicate myself wholeheartedly to a cause so that I have more impact. My goal is to shed light on the beauty of the ocean and how important it is for our planet.” – Hayden Panettiere

Now that you know all about Hayden Panettiere’s net worth and how she achieved success; let’s take a look at some of the lessons we can learn from her:

1. Be Whoever You Want To Be

People can tell when you’re happy with being you and when you’re not. It’s only cheesy because it’s true. The way you carry yourself and that light coming out of your eyes are the most attractive things about you.

You just have this freedom when you’re younger – this lack of concern to fail or do anything wrong.

How much is Hayden Panettiere worth?

Hayden Panettiere’s net worth is estimated to be $15 Million.

How old is Hayden Panettiere?

How tall is Hayden Panettiere?

Hayden Panettiere is an American actress and singer best known for her roles as cheerleader Claire Bennett on the series ‘Heroes.’

She is also known for her role as Juliette Barnes in the ABC musical drama series ‘Nashville.’ She first appeared in a commercial at 11 months old.

What do you think about Hayden Panettiere’s net worth? Leave a comment below.

What is Adam Levine's net worth? Introduction  As of ,...