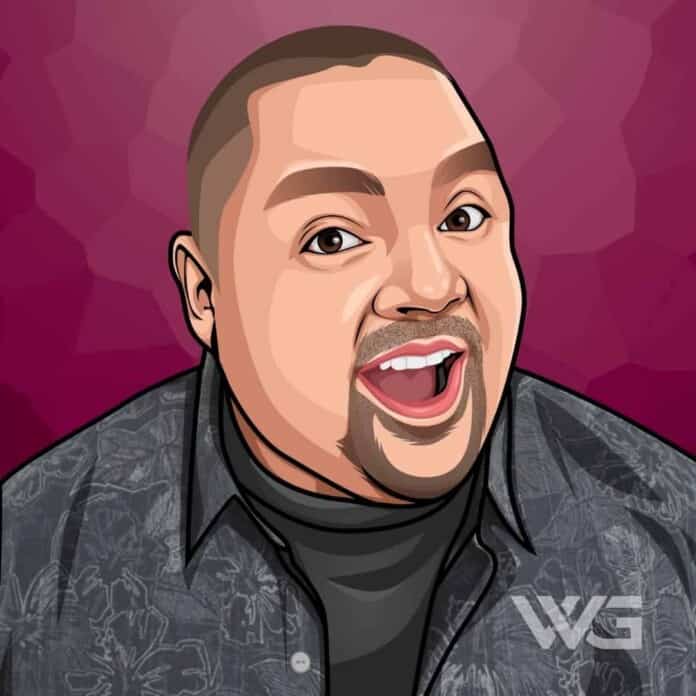 What is Gabriel Iglesias’ net worth?

Gabriel Iglesias “Fluffy” is an American comedian and actor.

Iglesias is best known for his shows ‘I’m Not Fat…I’m Fluffy’ and ‘Hot and Fluffy’. His incredible stand-up comedy is a mix of storytelling, characters, sound effects, and parodies that brings the comedian’s personal experiences to life.

As of December 2022, Gabriel Iglesias’ net worth is estimated to be roughly $40 Million.

Gabriel Jesus Iglesias was born on the 15th of July, 1976, in California.

A single mother raised Iglesias, and he had Type II Diabetes at one point in his life. Hospitals and doctors warned him that he only had two years to live. He then decided to lose weight and live a healthy lifestyle.

Iglesias began doing yoga and starting a low-carbohydrate diet. He currently lives in California, and he also owns a Chihuahua named Bruno.

Iglesias started his comedy career in 1997. He first appeared on television in the comedy series ‘All That,’ followed by his shows ‘Premium Blend and ‘My Wife and Kids.

In 2007, Iglesias voiced an entire Mexican family in on the animated series ‘Family Guy’. The same year, he hosted ‘Live at Gotham’. In 2009, he released the DVD of his own stand-up ‘I’m Not Fat…I’m Fluffy’.

In 2016, Iglesias appeared in the TV shows ‘WWE SmackDown’ and ‘WWE Tribute to the Troops’. He also starred in ‘El Americano: The Movie’ and ‘Smurfs: The Lost Village’ and ‘The Nut Job 2 ‘.

How Does Gabriel Iglesias Spend His Money?

Gabriel Iglesias is one of the highest-paid comedians in the industry, and he is a big fan of collecting Volkswagen buses. This kind of bus can cost a fortune.

Iglesias is a proud owner of a home in Signal Hill, California. He purchased the home in 2006 for an estimated $1.4 million.

Here are some of the best highlights of Gabriel Iglesias’ career:

“As long as you have a director, that’s your feedback. It’s the director telling you, “Okay. That was great! Okay. Can we add a little? Can you tweak it like this? Make it more high-pitched? Can you give it a little growl?” – Gabriel Iglesias

“I know you can not be on top forever. There’s always going to be the next guy, and if I’m going to go down, I’d like to know I helped the next guy take my spot.” – Gabriel Iglesias.

“Social media has definitely changed the game for me. I can connect to my fans on Twitter and interact with them daily. YouTube has been a game-changer as well – people around the world have been exposed to my comedy through my YouTube channel.” – Gabriel Iglesias

“You know, a lot of people think that just ’cause you work out, lift weights, eat right, and do what people tell you to do that you’ll live a long life, maybe you will. But, why do people measure life by the years instead of about how good the years were.” – Gabriel Iglesias

“Being on TV sucks. It’s a lot of work. You memorize scripts, and then you show up, and they change everything. I’m a control freak. When I’m doing stand-up, I say what I want, and then I get instant feedback.” – Gabriel Iglesias

“The first time I got on stage, I was 10 years old, and I made impressions. I remember seeing Eddie Murphy RAW and seeing people laughing and having a good time, and that was the same response I was getting so I thought I was on to something.” – Gabriel Iglesias

Now that you know all about Gabriel Iglesias’ net worth and how he achieved success; let’s take a look at some of the lessons we can learn from him:

You gotta live life before you can talk about it. Sometimes when things don’t work out in life, they work out on stage.

Comedians do movies and TV so that when they tour, they sell out. That’s the goal: To get popular enough, so the place is packed.

Connect with people and love the feedback after shows. It takes some time, but the fans will appreciate your work, which makes it worth it.

How much is Gabriel Iglesias worth?

Gabriel Iglesias’ net worth is estimated to be $40 Million.

How old is Gabriel Iglesias?

How tall is Gabriel Iglesias?

Gabriel Iglesias is known for wearing Hawaiian shirts during his stand-ups, and his unique comedy has made him very popular among people of all ages.

Today, he has become one of the greatest stand-up comedians in the world. He has also been named a ‘comedy genius’ by San Antonia Express-News. He has done voice work in several films such as The Nut Job’, ‘Norm of the North,’ and ‘The Book of Life’.

As of December 2022, Gabriel Iglesias’ net worth is estimated to be roughly $40 Million.

What do you think about Gabriel Iglesias’s net worth? Leave a comment below.