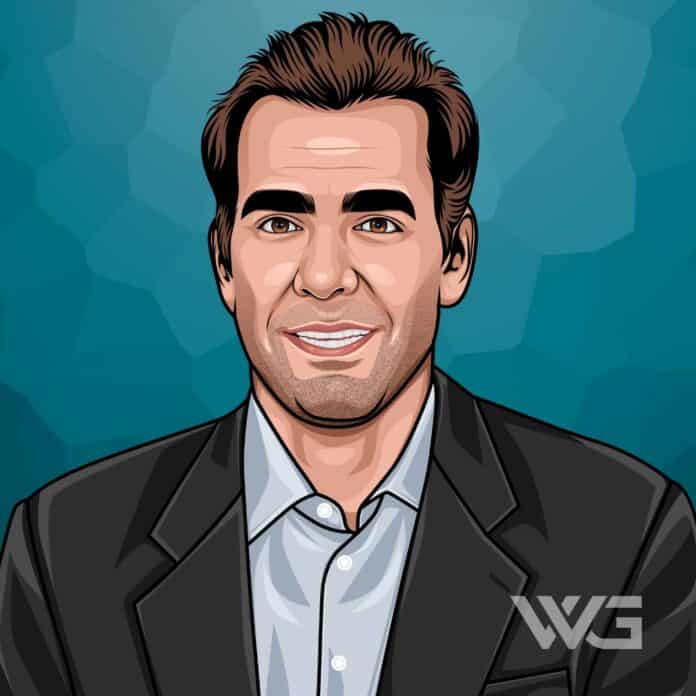 What is Pete Sampras’ net worth?

Petros “Pete” Sampras is an American former professional tennis player who began his career in 1988.

During his tennis career, Sampras became the number one in the tennis world rankings and earned 14 major singles titles.

Although he retired in 2002, he has periodically returned to the court a handful of times to maintain his skills.

When he was three, he picked up his first tennis racket and spent hours bouncing a ball against the wall of his house.

In 1978, Pete’s family moved to Palos Verdes, California and the warmer climate allowed him to play tennis much more regularly.

Sampras later joined the Jack Kramer Club, where his skills at tennis became apparent, and he started being officially coached and trained.

His trainer at the time, Dr. Peter Fischer, helped Pete transform his double-handed backswing into a single-handed one to better prepare him for competing at Wimbledon.

Pete Sampress started his professional career in 1988 and continued to play until 2002.

Sampras was number one in the world tennis rankings for 286 weeks starting in 1993, and set the record for the year-end number-one rankings.

From 1993 to 2000, Sampras won seven Wimbledon titles, tying him with Novak Djokovic for the record.

However, despite his successes, he did struggle when playing on clay courts, only winning five matches on them during his career.

Pete Sampras is one of the richest tennis players in the world, and he has earned an estimated $43 million during his career.

However, unfortunately, his individual career earnings have not been made public, leaving fans to speculate about the matches that paid him the most.

That said, we do know that during his career, he earned at least $100 million from endorsements and paid appearances, which helped his wealth skyrocket.

If any new information becomes available, we will be sure to keep you updated.

Pete Sampras married actress and former Miss Teen USA Bridgette Wilson in 2000, and together they have two sons, Christian Charles and Ryan Nikolaos.

In 2010, he announced that many of his trophies and career memorabilia had been stolen from a storage facility in West LA, though most ended up being recovered.

Sampras is active on his official Instagram account, though he is rarely active and never posts about his private life.

Since stepping away from the court, Sampras and his family have preferred to live a quiet life away from the limelight, despite his immense net worth.

Pete Sampras has earned many awards and career titles as a professional tennis player.is

While all of his victories and accolades are noteworthy, some stand out over all the rest.

Here are some of Pete Sampras’ best career achievements and victories:

Like Roger Federer, Sampras enjoyed a lot of success during his career, which has made him a legend in the tennis world.

If he had continued competing, it is likely he would have continued winning even more awards and tournament achievements.

How Does Pete Sampras Spend His Money?

Pete Sampras could easily buy some of the most expensive houses in the world, and he has certainly acquired some impressive real estate.

This mansion came with 20 acres of land, a lit tennis court, seven bedrooms, and 12 bathrooms.

By the end of 2013, Pete was reported to have bought a 2-acre property in Bel Air for $6 million.

Months after purchasing this home, Pete bought a neighboring home for $3.5 million, which he turned into a private gym and personal man cave.

Pete Sampras has reached many milestones during his professional tennis career.

However, some moments stand out more than others for the impact they have had on his fame and fortune.

Here are some of the best highlights of Pete Sampras’ career:

Although these are only a few of his most significant moments, they are the ones that have had the greatest effect on his career.

He may not be as well-known in the mainstream as Serena Williams, but Paul Sampras has enjoyed a remarkably eventful career.

Pete Sampras rose to become one of the wealthiest tennis players in the world, but despite his success, he always remained humble.

No matter how much he achieved, he never let it go to his head and solely focused on doing his best.

Here are our favorite quotes from Pete Sampras:

There is a lot that we can learn from Pete Sampras and his world-renowned tennis career.

Now that you know all about Pete Sampras’ net worth, we can take a closer look at what he can teach us about reaching our own goals.

Here are some of the best success lessons to learn from Pete Sampras:

1. Focus On Getting Things Done

If you want to become successful, you have to dedicate yourself and focus on getting as much done as you possibly can.

This doesn’t mean you should overburden yourself, but rather that you should concentrate your efforts on where they will be most productive.

2. Work Hard, But Know When To Relax

Hard work is essential if you want to make progress towards your goals.

However, you have to learn to have a healthy balance between work and play so that you don’t burn yourself out.

3. Let Your Successes Motivate You

No matter how small your successes may seem, use them to motivate yourself to reach new heights.

Once you achieve a small goal, set an even higher one for yourself so that you’ll continue to push yourself.

Pete Sampras has achieved much during his career as a professional tennis player.

Although he retired in 2002, he is remembered as one of the greatest servers in the sport, and his legacy continues to inspire new generations.

Make sure to check back often so that you don’t miss any updates impacting Sampras’ wealth.

What do you think about Pete Sampras’ net worth? Leave a comment below.

Former hockey player Nicklas Lidstrom made millions as one of the best defensemen in the history of the NHL.