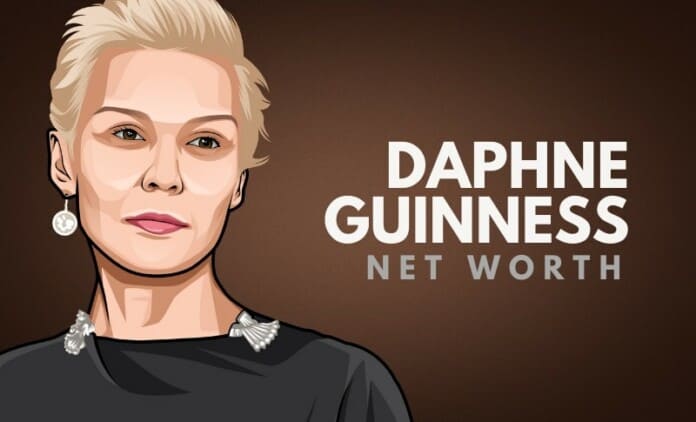 What is Daphne Guinness’ net worth?

Daphne Guinness is an English socialite and fashion designer from London. She is a direct descendant of the 18th-century Irish brewer Arthur Guinness.

Daphne Diana Joan Susanna Guinness was born on the 9th of November, 1967, in Hampstead, London. Guinness is the daughter of brewery heir Jonathan Guinness and renowned French beauty Suzanne Lisney.

She was brought up in England and Ireland, holidaying in Spain every summer – where she used to swim in Salvador Dali’s lobster-filled pool.

Guinness’ first work in fashion was with Isabella Blow. At the request of Fashion Institute of Technology director Valerie Steele, she spent two years mounting an exhibition of a hundred displays of her clothing, which was staged within the context of her other projects, film, and modeling.

Since 1994, she has been on the International Best Dressed List. In 2010, she was named in Tatler’s top 10 best-dressed list. The following year, she created a make-up line for MAC cosmetics.

In June 2010, Guinness purchased at auction the entire wardrobe of Isabella Blow, her friend who committed suicide in 2007. The lot was purchased prior to an auction which was arranged at Christie’s.

Guinness said of the purchase, “Indeed, in many ways, the auction would not be merely a sale of clothes; it would be a sale of what was left of Issie, and the carrion crows would gather and take away her essence forever.”

Here are some of the best highlights of Daphne Guinness’ career:

“I can’t understand it when people are closed-minded. Boy, have I made mistakes and been very wrong. I can’t tell you the amounts of times I’ve been let down, but I still try to see the best in people.” – Daphne Guinness

“Part of being a conscious human being is having an intention. And if you put an intention into whatever you do, it’s definitely going to be more satisfying in the end” – Daphne Guinness

“We need better things, not more. We should not pollute the world with meaningless, unused things when we can make and support things of rare and precious beauty.” – Daphne Guinness

“I’m normally late, so I just kind of throw on the sort of thing that’s at hand. And then I’ll go through phases of wearing the same thing again and again and again – and my wardrobe is mainly about black and white, so it goes together. I’ll play with certain elements, but I don’t really think about it too much.” – Daphne Guinness

“I’ve been really upset sometimes when I’ve been misquoted. And it’s the one thing they use in big print. Or it’s taken out of context. Thoughts are fluid and words are sticky. That’s the thing.” – Daphne Guinness

Now that you know all about Daphne Guinness’ net worth, and how she achieved success; let’s take a look at some of the lessons we can learn from her:

1. You Can Be The Change

You can’t change the world, but you can be the change. Don’t neglect to fight for the things you feel passionately about because you think your voice is too small and that not enough people care.

Go to bed early and wake up early. Sleep is not something your health can afford to skimp on, either.

Whatever you can do, put aside time each day to oil your engine. It makes you feel wonderful; inspired, creative, enthusiastic, happy.

How much is Daphne Guinness worth?

Daphne Guinness’ net worth is estimated to be $100 Million.

How old is Daphne Guinness?

How tall is Daphne Guinness?

Daphne Guinness is an artist of both British and Irish nationality who accumulated her net worth as a fashion icon, writer of fashion articles, as well as directing a couple of videos and creating a new fragrance for Comme des Garcons.

Ever since, she has become a true fashion icon who has worked with the best-known names in fashion, including Karl Lagerfeld, NARS, MAC, Akris, Gareth Pugh, and Philip Treacy among others.

What do you think about Daphne Guinness’ net worth? Leave a comment below.