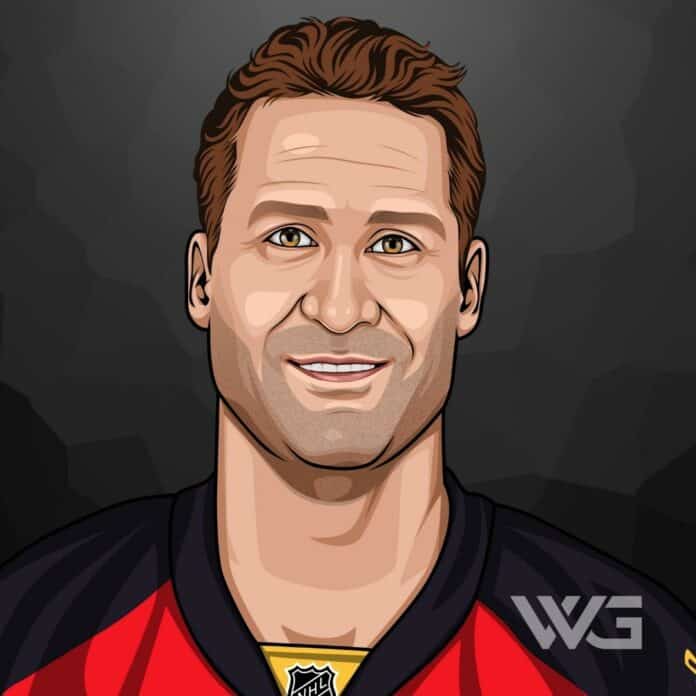 What is Ed Jovanovski’s net worth?

Ed is most known for two seasons playing in the OHL for the Windsor Spitfires, initially drafted by the Florida Panthers in 1994.

In 1995, he signed a $5.7 million contract with the Panthers and was subsequently traded to the Vancouver Canucks in 1999.

He made this his home team until 2006 before he signed an enticing offer of $32.5 million as a contract with the Phoenix Coyotes.

Ed finished his professional NHL career by returning to the Panthers in 2011, with a four-year contract of $16.5 Million.

As of November 2022, Ed Jovanovski’s net worth is estimated to be $53 Million.

Ed Jovanovski was born in Windsor, Ontario on June 26, 1976 to parents, Kostadin and Lilja Jovanovski. He is of Macedonian descent, with his immigrant parents only coming to Canada in 1973.

His father was a semi-professional soccer player in the former Yugoslavian region, which spurred Ed’s love of sports.

Initially playing soccer, he didn’t touch a puck until 11 years of age, when his older brother (Denny) had joined a hockey team.

His performance got him drafted to the Ontario Hockey League (OHL) with the Windsor Spitfires, where he scored 50 points in 62 games as a defenceman. It was here that he was named to the OHL and Second All-Star Teams.

In the off-season, Ed was selected as a first draft pick to the Florida Panthers in the 1994 NHL rookie season. He would not see any game time until 1995 due to a labor dispute with the players.

Ed would continue to play for the Panthers until 1999 when he was drafted to the Vancouver Canucks, where he had an outstanding performance as a defenceman. It was here that he earned most of his accolades.

His largest contract came in 2006 with the Phoenix Coyotes as an unrestricted free agent, which signed Jovanovski for 5 years. He chose to serve as the captain of the team in the first month of the 2011-2012 season.

Ed returned to the Florida Panthers on July 1st, 2011 for three years. He suffered a debilitating injury and subsequent surgeries, which impacted his gameplay. On Dec 28th, 2015 Ed officially announced his retirement.

Jovanoski opened strong as he was the first draft pick of the Florida Panthers.

His continued performance let him increase his earnings exponentially throughout his entire career. His min and max salary can be found below.

Information for later years are not made public as Ed retired from hockey after his injury in the 2015-2016 season.

Ed Jovanovski is one of the richest hockey players in the world. His passion for hockey, journalism and humble beginnings have inspired him to achieve greatness.

Although the hockey star is private about his finances, his current net worth is $53 million.

His finances have grown year over year due to intelligent financial decisions, guided by his career and investments.

Jovanovski’s retirement has impacted his net worth negatively, as his investments have held their value, primarily his real estate holdings.

When Ed started with the Florida Panthers, he had purchased a condo in Boca Raton, Florida.

It was there that he met his wife, Kirstin, during one of his summer stays in the state. They welcomed a baby daughter into the world on August 25th, 1998.

The couple had their second daughter, Kyra, on April 24, 2001. Kyra was one of two twins, but her sister, unfortunately, passed away before birth.

In May of 2006, twins Cole and Coco were born in Florida.

Ed Jovanovski has a plethora of awards and achievements that he has enjoyed throughout his career.

Here are some notable awards from Ed Jovanovski’s career:

Jovanovski came to play and was not ready to take it slow. His debut performance shocked the world after the first draft as to what Ed could achieve during his meteoric rise in his professional career.

How Does Ed Jovanovski Spend His Money?

Ed’s salary and retained earnings had kept him busy. Like most other wealthy individuals, he prefers to invest his money in real estate.

Other than his awards, Ed has had multiple highlights and accolades throughout his career that have made him a overall successful hockey player.

Although he was the star defenceman in many professional teams, he also brought his myriad experience to the rink by being a captain, friend, and motivator to his colleagues.

Here are some of the best highlights of Ed Jovanovski’s career:

Ed is one of the world’s most highly decorated hockey players and has achieved this success as a defenseman.

He rivals other successful hockey players such as Stan Mikita, Wayne Gretzky, and Wyatt Russell.

A player dedicated to his craft, Jovanovski has frequently provided words of wisdom that can be translated from the rink to everyday life.

There are many things that can be learned from Ed’s struggle, and it is demonstrated both through his actions and his words.

Here are our favorite quotes from Ed Jovanovski:

Ed Jovanovski is the epitome of success and determination. From his humble beginnings, he grew into a family man that was unwilling to give up or give in.

He can safely say that his retirement is enjoyed in the company of those he loved most dearly.

Here are some of the best success lessons to learn from Ed Jovanovski:

Demonstrated by his persistence through his surgery, hip injury, and his forward-thinking attitude, he was able to lead the Florida Panthers to victory.

Jovanovski can teach us all a thing or two about pushing through pain, contentment, and laziness.

Ed Jovanovski has had his share of obstacles throughout his life. From losing a child in utero, court proceedings, and being the son of immigrants who barely spoke the language, Jovanovski’s net worth is astonishing when remembering his humble beginnings.

Perhaps it was his dedication to the sport or his determined ambition, but Jovanovski never strayed from his path. He was dedicated to becoming a professional NHL player, no matter the consequences or nay-sayers.

Ed Jovanovski is a great individual with all-rookie team honors. His net worth has increased year over year, especially after his championship-winning tournament.

Once Jovanovski signed on to the Vancouver Canucks, he had already begun his massive climb towards being the team’s best defencemen.

Out of all the gold medals that he holds, he is most thankful to his beautiful wife and four children.

As of November 2022, Ed Jovanovski’s net worth is estimated to be $53 Million.

What do you think about Ed Jovanovski’s net worth? Leave a comment below.