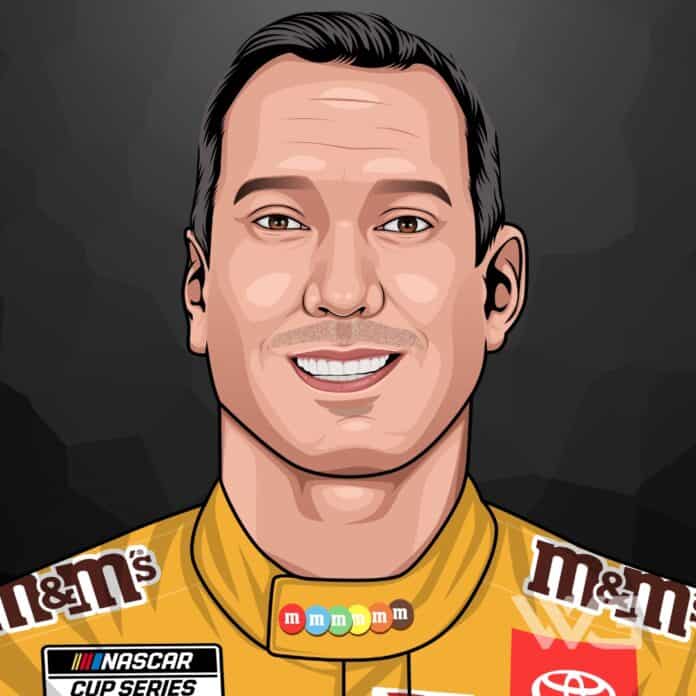 What is Kyle Busch’s net worth?

Kyle Busch is a professional stock car racing driver and team owner from the United States.

He now runs the No. 18 Toyota Camry for Joe Gibbs Racing in the NASCAR Cup Series full-time and the No. 51 Toyota Tundra for Kyle Busch Motorsports in the NASCAR Camping World Truck Series part-time.

The Truck Series is comprised of several KBM trucks, which Busch won in 2015 and 2019, taking the Cup Series, as well as the 2009 NASCAR Nationwide Series.

He is Tom and Gaye Busch’s second child and Kurt Busch, his older brother, is the well-known race car driver who won the 2004 NASCAR Nextel Cup Series.

During their early years, both brothers worked at their father’s shop. Kyle took over as crew chief of his brother’s dwarf car team at the age of 10, while Kyle’s mother encouraged him to study dentistry.

However, Kyle had a strong desire to pursue a career in racing since he was a young child.

He began competing in auto racing at the age of 13 and began his driving career by competing in the Legends Series.

Between 1999 and 2001, he won 65 races in the Legends Car competition, including two track championships at the short-track Las Vegas Motor Speedway Bullring.

During the 2001 season, Kyle Busch switched to the Late Models division and won ten championships in the bullring.

After joining Roush Racing, he entered the NASCAR Craftsman Truck Series at the age of 16. He competed in his first race at Indianapolis Raceway Park while operating a No. 99 Ford for Roush Racing.

Hendrick Motorsport, a competitor of Roush Racing, hired him as a development driver in 2003.

While at Hendrick Motorsports, Kyle participated in seven ARCA RE/MAX Series races, winning twice in a row at Kentucky Speedway and Nashville Superspeedway in April and May, respectively.

He won four more races in his rookie campaign, tying Greg Biffle for the most victories by a driver in a rookie campaign. He also came in second place, falling short of Martin Truex Jr., the series champion, by the points they both scored.

In 2007, Kyle Busch became the first competitor in the Nextel Cup Series to triumph in the Car of Tomorrow.

He led the most laps while racing for Joe Gibbs Racing and finished fourth in the 50th Daytona 500.

Kyle joins his brother Kurt, Cale Yarborough, Denny Hamlin, and Carl Edwards as one of the greats of  NASCAR racing.

His fourth-place performance at Auto Club Speedway gave him the series points lead for the first time in his career.

In 2010, he broke the previous record for the most victories in a single season by winning 13 races.

After graduating with honors from Durango High School in 2002, Kyle went back to continue his NASCAR career.

When the NASCAR authorities imposed an age restriction on participation, Kyle Busch was forced to leave NASCAR and join the American Speed Association (ASA) National Tour.

After his contract with Hendrick Motorsports for the 2008 season was not renewed, Kyle left the team and joined Joe Gibbs Racing, the home of  Denny Hamlin, for the 2009 campaign.

Kyle subsequently spent 15 years with Joe Gibbs and was expected to win many more races in the years ahead. However, he recently announced that his time with Joe Gibbs Racing is over and he’ll be moving to Richard Childress Racing for the 2023 season.

He competed in seven Busch Series contests while operating NEMCO Motorsports’ No. 87 Chevrolet. Out of the seven races, he placed second in two of them, including his debut at Darlington Raceway and Lowe’s Motor Speedway.

Here’s a breakdown of Kyle Busch’s annual net worth:

At Daytona International Speedway, Kyle Busch won the ARCA Re/MAX Series 200-mile race to kick off the 2004 season. He also began his first full-time Busch Series season by finishing first and earned his first pole position in the fourth race of the year at Darlington Raceway.

The following year, he earned his first victory in the series when he triumphed at Richmond International Raceway.

Samantha holds a psychology degree from Purdue University and on May 18, 2015, the couple welcomed a son into the world whom they’ve named Brexton Locke Busch.

After visiting St. John’s Home in Grand Rapids, Michigan, Kyle established the Kyle Busch Foundation in 2006. The charity provides for the needs of American youngsters from disadvantaged backgrounds.

Kyle Busch, along with Danica Patrick, is one of NASCAR’s wealthiest drivers and is set to see his son, Brexton, step into his shoes shortly.

Here are some of the most notable occasions in Kyle Busch’s career:

With his move to Richard Childress Racing in 2023, Kyle is no longer wondering what his future will hold, as he was on tenter hooks waiting for the finalization of his 2023 contract.

Childress Racing’s No 8 car is now going to be Kyles’ new home and his new boss is expecting great things from his new, championship-winning driver.

How Does Kyle Busch Spend His Money?

Kyle, like many of the richest racing drivers in the world, invests in property, and lives most of the time in Mooresville, North Carolina, despite being born in Las Vegas.

For $7.5 million, he acquired the 77,000 square-foot European-style home perched on the shore of Lake Norman in 2012 and, at the time, broke the local Charlotte home sales record.

He also invested $1 Million in his energy drink, as well as investing in multiple other business ventures throughout his career.

In a statement of public apology, he admitted that while test-driving a Lexus LFA, he became “carried away.”

He admitted to speeding on August 23, 2011, and was given a $1,000 fine and a 45-day license suspension. In addition, he was sentenced to one year of unsupervised probation and 30 hours of community service.

Busch and the team owner, Rick Hendrick, donated their winning shares from the race to the American Red Cross after Busch won his first Cup Series race in California on September 4, 2005.

Their wish was to aid those in need following Hurricane Katrina, which led to Kyle making an appearance on The Oprah Winfrey Show, one of the best TV shows of all time in many viewers’ opinion.

Here are some of the other highlights of Kyle Busch’s career:

There has been much speculation about Kyles Busch’s ability to meet his new team’s expectations, as his last five years have not seen him perform to his true potential.

The Childress Racing team is run very differently from the Gibbs outfit and if his new team and he can forge a good working relationship, then the chances are that he will be back at the front of the pack and standing on the winners podium very soon.

Kyle and his brother Kurt were brought up by their father to be aggressive and competitive when racing.

Luckily for Kyle, he has much better control over his temper than his brother Kurt, who was constantly involved in protracted and vicious feuds with fellow drivers.

Here are our favorite quotes from Kyle Busch:

During the course of his career, Kyle has had to share the limelight with his brother Kurt, which has not been easy.

At one point, the brothers became involved in an acrimonious dispute and didn’t speak to each other for 6 months. Only after the driver’s grandmother intervened did they apologize to each other and settle their differences.

Now that you know all about Kyle Busch’s net worth, here are some of the best success lessons to learn from Kyle Busch:

Kyle was brought up to give no quarter when battling it out on the track, whether it was a stranger or his own brother.

While he was more controlled than his brother, it meant that they were constantly at each other’s throats, but mostly on the track and not in their personal lives.

2. Don’t Allow Obstacles to Set You Back

Kyle feels that it is important to never allow obstacles to get in the way of your dreams.

If the goal is worthwhile and you have the means to go after it, the obstacles are just temporary impediments to getting the job done.

When he’s out on the track, Kyle will take any opportunity to get ahead, even if the gap is too small and it gets him into trouble.

But that is his nature and he believes that to win, you have to stay true to your basic instincts, which will save you when you’re in a tight spot.

Kyle Busch is one of the highest-paid race car drivers in the industry, but he was never clumsy with his earnings. He invested in various businesses and gained massive endorsements from Monster and many other large corporations.

Without a doubt, Kyle Busch has left his mark on the racing community and now happily resides in his hometown of Las Vegas and Mooresville, NC, with his wife and son.

What do you think about Kyle Busch’s net worth? Leave a comment below.