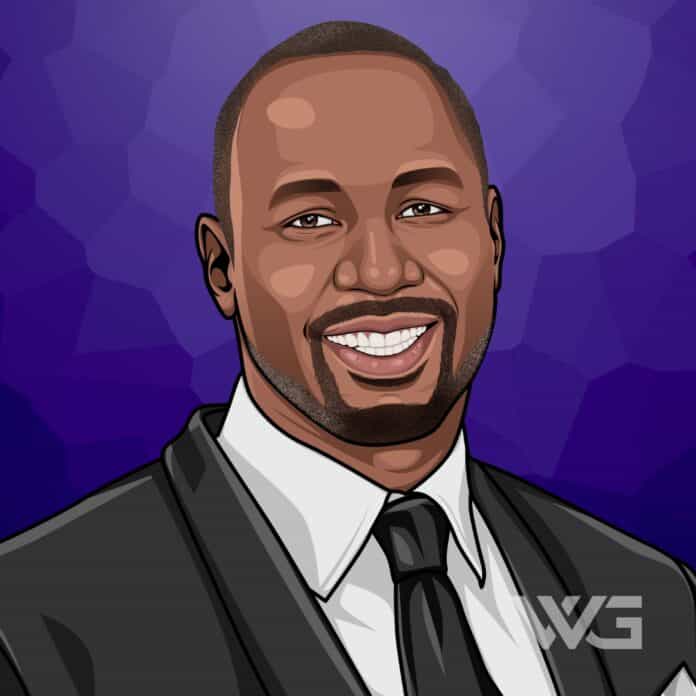 What is Lennox Lewis’ net worth?

Lennox Lewis is a former professional boxer and three-time heavyweight champion of the world. He is considered by many fans to be the best British boxer of all time.

His matchup with Mike Tyson in 2002 brought in a then-record 1.95 million Pay Per View audience, making Lewis millions of dollars in PPV bonuses and the guaranteed purse.

In search of a better and safer life, he and his mother relocated to Ontario, Canada, when he was twelve years old.

He decided to make boxing his preferred sport when he was thirteen and, after training hard, achieved success as an amateur boxer.

At 18 years old, he was asked to represent Canada in the Super-Heavyweight division at the 1984 Summer Olympics in Los Angeles. This was after he performed well by winning a gold medal at the Junior World Championship in 1983.

The International Boxing Association ranked him as the sixth-best heavyweight boxer in the world at the time.

He made it to the Olympic quarterfinals but fell to American Tyrell Biggs, who went on to win the gold medal.

Lewis chose to carry on boxing as an amateur after the Olympics so that he might take part in the 1988 Summer Olympics.

In the 1986 World Championships, he was defeated by Bulgaria’s Petar Stoimenov, but later that year, at the Commonwealth Games, he took home a gold medal.

In 1989, Lewis made his way back to England to start a professional boxing career.

For his first twenty-two professional fights, he went undefeated after signing with boxing promoter Frank Maloney. He advanced through the ranks swiftly, and in 1992 he consented to take on Donovan “Razor” Ruddock.

The winner would then face either Riddick Bowe or Evander Holyfield for a shot at the title.

Lewis knocked off Ruddock in the second round, and Bowe triumphed in his contest against Holyfield, the current champion. Bowe elected to give up the World Boxing Championship title rather than defend it against Lewis, and Lewis received it in December 1992.

He was the first British fighter to hold the heavyweight title in the 20th century and defended it successfully three times.

Lewis lost the title in a controversial fight in September 1994, which the referee ruled a technical knockout. Lewis got up by the count of six, but he then staggered forward, and the referee said he couldn’t go on.

Lewis and Lionel Butler’s return fight was scheduled to give Lewis the chance to earn back his title if he prevailed, but when he did, the World Boxing Commission opted to give Mike Tyson the chance to take it.

He filed a lawsuit after Tyson won the title to require him to make an immediate defense. After the legal dispute was resolved, Tyson successfully defended his title against Bruce Seldon before giving it up.

Lennox Lewis joins other top British boxers like Frank Bruno, Tyson Fury, and Naseem Hamed as some of the best world title holders of their era.

Lennox Lewis successfully defended his Ring, IBF, and WBC belts at The Pyramid in Memphis in June 2002, by brutally knocking out the famous Mike Tyson in the eighth round. This fight was one of the most viewed fights on television at the time.

In one of the most anticipated fights in heavyweight history, Lewis made over $50 million from just that one match with Tyson.

Lennox made hundreds of millions of dollars over the course of his career via guaranteed purses and, more significantly, PPV bonuses.

His earnings are not as high as Manny Pacquiao, Oscar De La Hoya, or even the great George Foreman, but he still rates as one of the best fighters of all time.

Lennox Lewis fought Evander Holyfield, who held the titles of both the World Boxing Association and the International Boxing Federation, in 1998, but the contest was controversially ruled a draw.

Eight months later, the scheduled rematch was called in his favor, thus establishing him as the undisputed heavyweight champion.

Here’s a breakdown of Lennox Lewis’ annual net worth:

Lewis retired in 2004 with an impressive record of 41 victories, 2 defeats, and 1 draw over the course of his professional career.

He amassed an astounding thirty-two knockout victories before he retired and said in 2008, that he would be open to coming out of retirement to compete in a battle against Riddick Bowe.

Lewis performed on the “Train of Thought” debut album by the American hip-hop group Reflection Eternal, which was released in 2000.

He played a small cameo role in the movie “Ocean’s Eleven”, a movie starring Brad Pitt, George Clooney, and Julia Roberts the year after, in 2001.

In the movie, he gets to fight Wladimir Klitschko, something we got to see in real life when Lewis beat Klitschko in the final fight of his career.

He made a cameo appearance in the music video for the Jennifer Lopez and LL Cool J song “All I Have” in 2003, and he made an appearance as himself in the comic sports program “The Jersey” in 2002.

In 2006 and 2007, he participated in the World Series of Poker, although he did not take home any prizes. He competed against a different caliber of opponent in 2008, on NBC’s Celebrity Apprentice, placing fourth overall.

After his boxing career was over, Lewis and his wife Violet Chang, former Miss Jamaica runner-up, moved to Miami Beach. They are parents to four children; Leviah, Landon, Leya, and Ling.

Lennox Lewis is one of the richest boxers in the world, after fighting some of the toughest heavyweight fighters ever to have stepped into the ring.

After his retirement, Lennox was employed as a boxing analyst for HBO’s “Boxing After Dark” from 2006 until 2010.

Here are some of the finest moments from Lennox Lewis’ career:

Lewis previously won the WBC heavyweight championship in 1992, becoming one of only two boxers in history and the first since Ken Norton in 1978 to do so without actually having to win a fight.

He was awarded the Boxing Writers Association of America’s Fighter of the Year honors in 1999 for his exceptional ability in the ring.

How Does Lennox Lewis Spend His Money?

As you can imagine, being one of the world’s richest heavyweight boxers, he has bought properties in America, Canada, and the UK, respectively.

He owns some of the most expensive cars in the world, with more than 7 vehicles in his garage and has made around $20 million in the last ten years as a boxing commentator.

Lewis, a devoted amateur chess player, funded an after-school chess program for underprivileged children, with one of them winning a chess scholarship at Tennessee Technical College.

Lennox Lewis is one of the richest boxers in the world but his earnings fall far short of Floyd Mayweather who is reportedly worth more than $560 Million.

Here are some of the best highlights of Lennox Lewis’ career:

One of the few surprise moments in Lewis’ career, was his defeat to Hasim Rahman in 2001.

He was rocked by an overhand right that landed flush on Lewis’ jaw, knocking him out for one of the biggest upsets in boxing history.

Lennox Lewis is a thoughtful and calculating fighter who plotted his strategy to become the best heavyweight boxer, very carefully.

He is the thinking man’s boxer, who set goals for himself and then went about systematically achieving each of them.

Here are our favorite quotes from Lennox Lewis:

Lennox Lewis had a plan that he implemented to become the world heavyweight champion.

After excellent performances as an amateur boxer and winning Olympic medals, he transitioned to the professional arena and scythed through his opposition on the way to the undisputed heavyweight title of the world.

Now that you know all about Lennox Lewis’ net worth, here are some of the best success lessons to learn from Lennox Lewis:

Lennox Lewis was very careful in his approach to boxing, always planning and calculating how he would achieve his goals.

It’s little wonder that he is also a very good chess player, as he at times seemed to be two or three moves ahead of his opponents.

Lewis knew that he could not box forever and that there was going to be a life after boxing.

He was therefore fortunate to have a plan that he could implement once his fighting days were over.

Lennox Lewis was always confident of his ability to beat any fighter in the ring.

His approach was to always be one step ahead and then have confidence in his boxing skills to get the job done.

Lewis knew that if he wanted to compete for the top rank in the world, he’d have to have the right type of backing.

To this end, he left Canada for the UK, getting the training he needed and improving enough to win every championship, including every heavyweight title, from the Junior World Championships to the Olympics.

He defeated some of boxing’s finest fighters, including Mike Tyson and Evander Holyfield, solidifying his place among the sport’s elite and becoming one of the best heavyweight boxers of all time.

What do you think about Lennox Lewis’ net worth? Leave a comment below.

What is Courage JD's net worth?  Introduction   Courage JD is a...