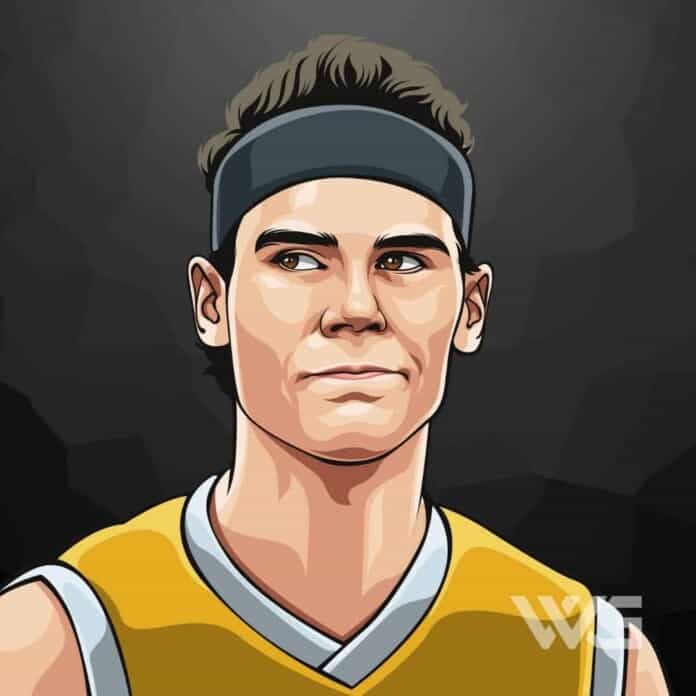 What is Rafael Nadal’s net worth?

Rafael Nadal Parera was born on the 3rd of June 1986, in Manacor, Spain. He is the son of an entrepreneur Sebastián and his wife Ana María Parera. He has a sibling, María Isabel, who is younger than him.

Rafael started playing tennis at the age of three, and by 1994, he had tasted victory at a regional tennis tournament for under-12 players.

In 2002, Nadal participated in his first ‘Association of Tennis Professionals’ (‘ATP’) match and emerged victorious against Ramón Delgado. With this victory, Nadal achieved the feat of becoming the ninth tennis player to win before sixteen years of age.

During 2003-2005, the talented young player beat Roger Federer in the ‘Miami Masters’ championship. In the same championship, he went on to become the youngest player since Boris Becker, to qualify to the third round.

Though Federer defeated him at the ‘Masters Series Hamburg’, Rafael defeated the former once again at the ‘French Open’ title.

In 2008, he reached the ‘Chennai Open’ finals but was eventually defeated by Russian player Mikhail Youzhny.

Rafael won the ‘Mubadala World Tennis Championship’, hosted in Abu Dhabi, once again in 2011, defeating Roger Federer. In the ‘Davis Cup’, he won again, this time winning against Olivier Rochus.

In 2015, at the ‘Qatar Open’, he lost the singles title to German player Michael Berrer. However, paired with Argentinian Juan Monaco, he won the doubles title in the championship.

Here are some of the best highlights of Rafael Nadal’s career:

“The only way of finding a solution is to fight back, to move, to run, and to control that pressure.” – Rafael Nadal

“When one player is better than you, at this moment, the only thing you can do is work, try to find solutions and try to wait a little bit for your time. I’m going to wait and I’m going to try a sixth time. And if the sixth doesn’t happen, a seventh. It’s going to be like this. That’s the spirit of sport.” – Rafael Nadal

“I appreciate a lot in this life; the things you cannot buy. Life is only once. I am happy being here and all the things that are a risk I normally avoid.” – Rafael Nadal

“My motivation and aspiration are the same, being number one or being number five. So that’s the truth. And my goal is the same – it’s to always be happy playing, it’s to enjoy the game and improve always.” – Rafael Nadal

“When one gets beaten by somebody better, one has to know how to lose with humility. Sure, I could have served better. Sure, I could have hit my forehand harder. But the truth was this was like an avalanche, and there was no way to stop it.” – Rafael Nadal

Now that you know all about Rafael Nadal’s net worth, and how he achieved success; let’s take a look at some of the best lessons we can learn from him:

1. Work Hard, Have Fun and Make it Happen

As Rafa says ’Stay healthy, do sports and above all have fun while doing sport. Competing or just for fun, whatever, simply enjoy and try your best.’

This is important because ‘a lot of times I had some problems, but I always had the passion and the personal motivation to keep going, to keep working hard, keep fighting for the things that really motivates me. That’s all.’

2. Trophies Are Earned On the Practice Court

Rafa may have incredible athletic ability and skill, but to win 10 French Opens this is not enough. One of the key ingredients to success is hard work.

3. Keep Your Eye on the Ball

Alongside hard work we need focus. Rafa “play’s each point like my life depends on it.”. This focus on winning point by point is what creates extraordinary results.

How much is Rafael Nadal worth?

Rafael Nadal’s net worth is estimated to be $220 Million.

How old is Rafael Nadal?

How tall is Rafael Nadal?

Rafael Nadal is a tennis player from Spain who is mainly known for his prowess on the clay court. He shares the record of bagging two Grand Slam titles on different kinds of courts, with former Swedish player Mats Wilander.

He is also the first tennis player to have won Grand Slam tournaments for ten years at a stretch.

What do you think about Rafael Nadal’s net worth? Leave a comment below.