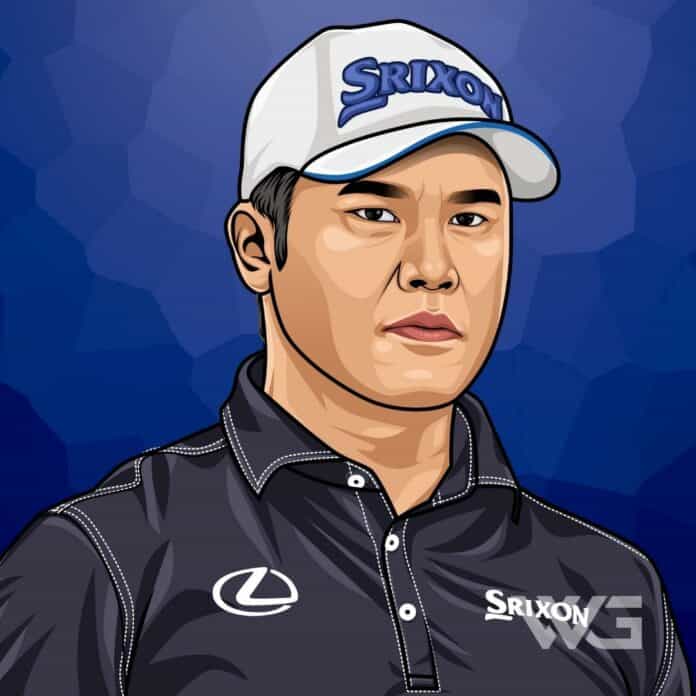 What is Hideki Matsuyama’s net worth?

Hideki Matsuyama is a Japanese professional golfer who is best known for winning the 2021 Masters Tournament.

His other achievements include dominating Japanese golfing tournaments and becoming a money winner on the 2013 Japanese Golf Tour.

As of February 2023, Hideki Matsuyama’s net worth is estimated to be $35 Million.

Hideki Matsuyama was born 25 February, 1992, in Matsuyama, Ehime, Japan, and was introduced to golf by his father at the age of four.

In order to find a better environment for golf, he transferred to Meitoku Gijuku Junior & Senior High School in Kochi Prefecture in his eighth grade.

After winning several championships, including a gold medal at the 2011 World University Games, Matsuyama was ranked number one in the World Amateur Golf Ranking.

Hideki Matsuyama began his career as a professional golfer in 2013, competing in the Tsuruya Open on the Japan Golf Tour.

He entered the Official World Golf Ranking in the top 50 following his top 10 finish at the 2013 U.S. Open, qualifying for the PGA Tour the following year.

Matsuyama picked up several notable victories as his career progressed, defeating Henrik Stenson in 2016 to win the WGC-HSBC Champions tournament.

With a total of eight PGA Tour wins to his name, his biggest success came in 2021 with his 1-stroke margin of victory at the Masters Tournament.

In 2017, he joined the ranks of Tiger Woods, Phil Mickelson, and other golfing icons in the Official World Golf Rankings, placing in the second position.

Rather than using the most expensive golf balls in the world used by some professionals, preferring to play with Srixon’s Z-Star XV golf ball in tournaments.

Competing with some of the richest golfers in the world, Hideki Matsuyama has enjoyed high career earnings over the years.

His biggest paycheck came with his win at the Masters Tournament, netting the Japanese golfer a cool $2 million for his efforts.

His continued presence in professional golf should see Matsuyama continue to draw an impressive salary as more victories come.

While Hideki Matsuyama’s net worth doesn’t compare to that of the richest athletes in the world, he’s nevertheless accumulated impressive wealth over the years.

His PGA Tour victories have allowed this wealth to increase consistently since he turned pro, further increased through his brand endorsement deals.

Exact figures on his sponsorship deals aren’t publicly available, but some estimates place this revenue as high as $600 million for the rest of his PGA Tour career.

Hideki Matsuyama married his wife, Mei, in 2017, with their daughter Kanna born in July of the same year.

Little is known about his wife and family, who prefer not to attend the games and tournaments he’s participated in over the years.

He has a social media presence, updating his fans through his official Instagram account on his activities and upcoming tournaments.

With a career that includes many victories both on the Asian golfing circuit and the PGA Tour, Hideki Matsuyama has picked up many awards and trophies.

He’s been recognized as one of the best modern golfers in the world, with a world-ranking track record to prove it.

Here are some notable awards and achievements from Hideki Matsuyama’s career:

Few Japanese professional golfers have accomplished as much as Matsuyama has achieved during his career.

We can expect many more great things to come for Matsuyama following his 2021 victory at the Masters Tournament.

How Does Hideki Matsuyama Spend His Money?

With his impressive net worth, Hideki Matsuyama can afford the most expensive golf clubs in the world and many other luxuries.

Thanks to his sponsorship deal, he’s the owner of a luxury Lexus car, with the company creating a special edition model dedicated to Matsuyama.

Matsuyama resides at the Windermere House in Florida with his wife and family, which includes a large swimming pool and landscaped gardens.

Hideki Matsuyama has had a hugely successful career as a professional golfer, with multiple tournament wins to his credit.

He’s made several team appearances over the years, representing Japan at the World Cup and other international golfing events.

Here are some of the best highlights of Hideki Matsuyama’s career:

It’s an outstanding list of accomplishments and achievements that marks him as one of the greatest golfers to have emerged from Japan.

We can expect many more notable highlights as Hideki Matsuyama’s career continues to unfold over the following years.

While Hideki Matsuyama isn’t known for giving long-form interviews, he has shared some thoughts on golf with the media over the years.

This ranges from his reflections on his childhood inspirations to how he sees himself in the overall pecking order of great golfers.

Here are our favorite quotes from Hideki Matsuyama:

Now that you know all about Hideki Matsuyama’s net worth let’s take a closer look at how his life experiences can improve our lives.

One of the most successful Japanese golfers of all time, his achievements serve as an inspiration for all aspiring athletes around the world.

Here are some of the best success lessons to learn from Hideki Matsuyama:

1. Aim For Consistency In Everything You Do

Striving for consistency in everything you do gives others confidence that you can be relied on to deliver the goods.

While it would be nice to improve in leaps and bounds, it’s rare that this happens in the real world.

Cherish each small improvement you make as they add up to something much bigger and more valuable in combination.

3. Capitalize On Every Opportunity You Can

Just as small improvements mean more than you might think, small opportunities also add up to something much bigger over time.

Take any opportunities you can, and you’ll soon find yourself soaring ahead of the competition.

That concludes this article exploring the amateur and professional career of Japanese golfer Hideki Matsuyama and how he earned his net worth.

His career continues to go from strength to strength, with more championships and tournaments in the pipeline for the star player.

Since his net worth is likely to change, we’ll be updating this article to cover the latest facts and figures, so be sure to check back in the future.

As of February 2023, Hideki Matsuyama’s net worth is estimated to be $35 Million.

What do you think about Hideki Matsuyama’s net worth? Leave a comment below.

Reggie Jackson is an NBA journeyman who was once signed to an $80 million contract with the Detroit Pistons and is worth tens of millions as a result.