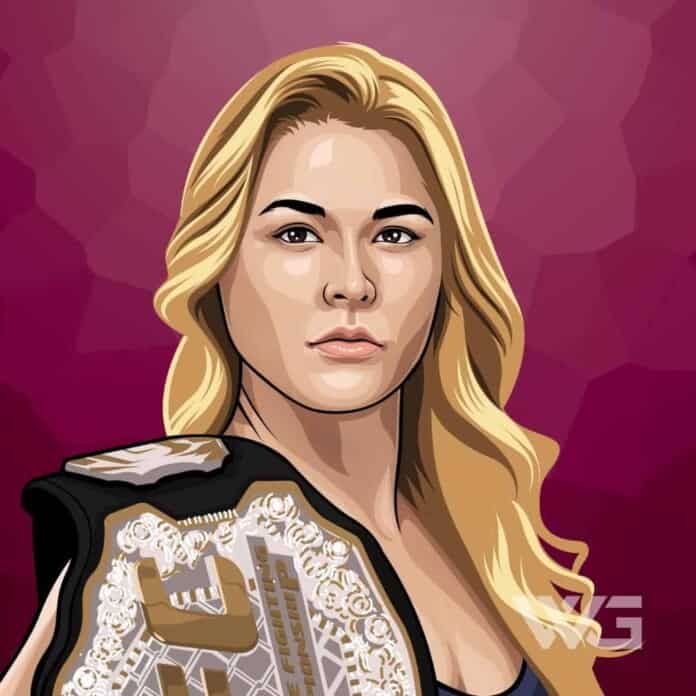 What is Ronda Rousey’s net worth?

As of February 2023, Ronda Rousey’s net worth is $13 Million, and she’s one of the richest MMA fighters in the world.

Ronda Rousey is an American mixed martial artist, judoka, and actress. She is most known for fighting in the UFC, and being the former UFC Women’s Bantamweight Champion.

Rousey also has a background in Judo and was the first woman in America to win an Olympic medal in the sport.

Ronda Rousey was born on the 1st of February, 1987, in Riverside, California. She has two older siblings, and her mother is a former Judo champion. In fact, Rousey’s mother, Ann Maria De Mars, was the first-ever American to win a World Judo Champion.

Hence, Rousey grew up around Judo, and decided to pursue the sport herself as a future career. She suffered from speech impediments when she was young, and had issues putting sentences together. Rousey dropped out of high school, and began her Judo career.

Rousey first began training Judo when she was 11 years old, and her mother taught her. When she was 17 years old, Ronda qualified for the 2004 Olympic Games, where she was the youngest judoka to compete.

In the same year, she won a gold medal at the World Junior Judo Championships. Rousey went on to win many more medals in the sport of judo; but at 21 years old, she quit the sport to pursue MMA as her new career.

During the time she was purely training mixed martial arts, she was working various jobs waitressing, bar-tending, and so on.

Her MMA debut was in 2011, and she quickly made it into the UFC. The fame came from winning 12 consecutive fights and becoming the first-ever UFC Women’s Bantamweight Champion.

Today, Ronda Rousey’s net worth is estimated to be $13 Million, making her one of the richest MMA fighters in the world.

Here are some of the best highlights from Ronda Rousey’s career:

“The knowledge that everything good can be taken away at any second is what makes me work so hard.” – Ronda Rousey

“Everyone wants to win. But to truly succeed; whether it is at a sport or at your job or in life; you have to be willing to do the hard work, overcome the challenges, and make the sacrifices it takes to be the best at what you do.” – Ronda Rousey

“To be the best, you have to constantly be challenging yourself, raising the bar, pushing the limits of what you can do. Don’t stand still, leap forward.” – Ronda Rousey

“Success is the result of hard work, busting your ass every day for years on end without cutting corners or taking shortcuts.” – Ronda Rousey

“No one is ever going to give you anything of value. You have to work for it, sweat for it, fight for it. But there is far greater value in accomplishments you earn than in accolades that are merely given to you. When you earn something, you never have to worry about justifying that you truly deserve it.” – Ronda Rousey

“I want to be a perfect fighter, and that’s one of those unattainable goals because you will never be perfect. But I can always be closer to perfect.” – Ronda Rousey

View our larger collection of the best Ronda Rousey quotes!

3 Keys to Success from Ronda Rousey

Ronda Rousey is one of the best and most notorious fighters in the MMA. Those who don’t follow the MMA will still probably recognize the name above all other female fighters.

Here are 3 success lessons we can all learn from Ronda Rousey’s career so far:

It’s pretty clear that Ronda’s had a love for mixed martial arts ever since she was a child. Even if that passion just began through judo. The point is that she’s also put every ounce of energy she’s had into the things she loves.

That’s the sole reason she’s come so far, because that extra 10% of effort sets you apart from everybody else.

2. Forget What Others Think

Ronda gets a lot of hate in the news and online almost on a regular basis. There might be a lot of different reasons for this; but she’s never let that stop her from getting back up and pushing forward.

3. Pay Attention to the Details

A lot of athletes are phenomenal at what they do; that’s why they enter into the hall of fame. However, paying attention to details, outside of performing the sport, can get you a long way in a short amount of time.

Ronda has managed to get a lot of media attention through caring about the small details. Whether that’s the way she speaks, the way she presents herself or the way she tells her story, she’s gained more attention, popularity… and money, because of this.

How much is Ronda Rousey worth?

Ronda Rousey’s net worth is estimated to be $13 Million.

How old is Ronda Rousey?

How tall is Ronda Rousey?

As of February 2023, Ronda Rousey’s net worth is $13 Million, making her one of the richest MMA fighters in the world.

What do you think about Ronda Rousey’s net worth? Leave a comment below.