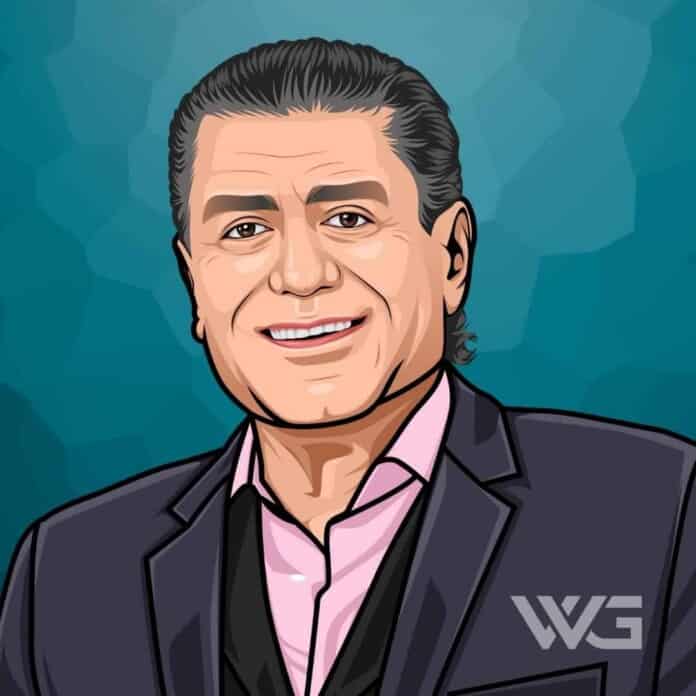 What is Haim Saban’s net worth?

Haim Saban is an Israeli-American investor and producer.

Saban has interests in financial services, entertainment, and media. He is one of the richest people in America.

Saban is the founder of Saban Entertaiment. He headed up consortiums that purchased the broadcasters ProSiebenSat.1 Media and Univision Communications.

In 1956, the Saban family immigrated to Israel. He was sent to a Youth Aliyah boarding school. He was expelled for being a troublemaker, and he enrolled in a night high school.

Saban married Cheryl Lynn Saban, with whom he has two children. He also has two stepchildren, Tifanie and Heidi. He resides in Beverly Hills, California.

In 1966, Saban started his career as a bass player and manager with the rock band The Lions of Judah.

In 1969, Dave Watts from the band The Tornados joined the Lions. The same year, the band traveled to England, performed in nightclubs in London, and was signed up by Polydor Records.

The band appeared on the program Colour Me Pop. The Lions recorded the single ‘Our Love’s A Growing Thing.’ The band later returned to Israel, and Saban focused on being a music promoter.

In America, Saban became a television producer. Then, in 1988, he founded Saban Entertainment.

During the same time, he and partner Shuki Levy became known for soundtrack compositions for children’s television programs of the 1980s.

With the growing shift in children’s television to cable channels such as Cartoon Network and Nickelodeon, the combined entity sought to launch a competitor that would carry programming from the popular Fox Kids lineup.

How Does Haim Saban Spend His Money?

The renovation of his estate took over a year. Today, the property is a minimalist paradise. It is filled with antiques from Israel. Large paintings by Chagall hang on the walls.

The Sabans have given more than 13 percent of their wealth to charity, a figure that does not include tens of millions of dollars in political donations.

Here are some of the best highlights of Haim Saban’s career:

“While we are disappointed that the Axel Springer transaction was not approved, we remain extremely pleased with ProSiebenSat. 1’s performance and with our investment. We will be reviewing all of our options going forward.” – Haim Saban

“Have you lost it, as they say? Yesterday Amikam Cohen delivered a highly persuasive speech about how expensive regulation is, and I agreed with most of what he had to say. It is also bad for the consumer. From the perspective of regulation, we are the worst country in the West. It’s a disaster.” – Haim Saban

“MPTF has spent the better part of a century helping the talented people of the entertainment industry in too many ways to count. Cheryl and I feel privileged to be a part of the greater cause and encourage others to join the effort.” – Haim Saban

“How do I know? I haven’t even been let into the building yet. I went there and the guard at the door told me open my briefcase, go here go there – I had to ask where the bathroom was.” – Haim Saban

“No, minus one. I profoundly dislike Bernie Sanders, and you can write it. I don’t give a hoot. He’s a communist under the cover of being a socialist. He thinks that every billionaire is a crook. He calls us ‘the billionaire class.’ And he attacks us indiscriminately. ‘It’s the billionaire class, the bad guys.” – Haim Saban

“I’m not suggesting we put Muslims through some kind of torture room to get them to admit they are or they’re not terrorists. But I am saying we should have more scrutiny. You want to be free and dead? I’d rather be not free and alive.” – Haim Saban

Now that you know all about Haim Saban’s net worth and how he achieved success; let’s take a look at some of the lessons we can learn from him:

Be you and trust your instincts.

Try to think about how long you tried to do something without success until you gave up?

Saban’s success is another example that there is no connection between grades and success.

As a child, he was a bad student. The school principal threw him out of school, and his parents sent him to a boarding school.

How much is Haim Saban worth?

Haim Saban’s net worth is estimated to be $3.4 Billion.

How old is Haim Saban?

How tall is Haim Saban?

Saban made his fortune in television and media. He is the founder of Saban Entertainment, a television production company.

Saban has composed the theme songs for several children’s television series such as ‘Inspector Gadget’ and ‘He-Man.’

What do you think about Haim Saban’s net worth? Leave a comment below.